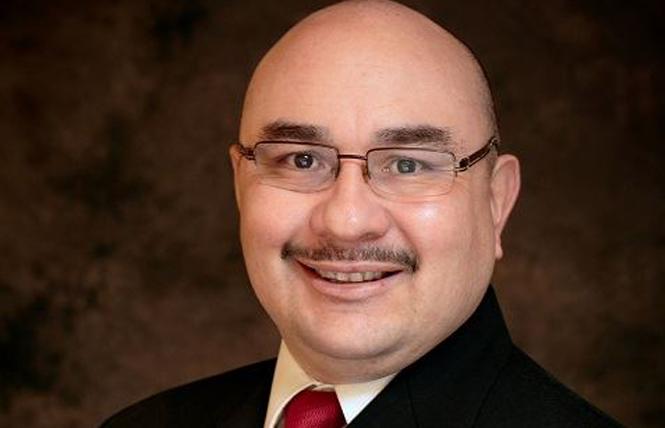 By a divided vote Monday night, the San Pablo City Council approved having the Pride flag be flown on its Civic Center flagpole for the rest of June.

The decision had been expected, as the East Bay city's mayor, Arturo Cruz, had told the Bay Area Reporter that he believed the council would approve flying the flag at its June 15 meeting. The brief but contentious discussion about doing so ended with City Council members Rita Xavier, who brought forward the motion, and Abel Pineda joining with Cruz in supporting the flying of the flag.

With the vote coming the same day as the U.S. Supreme Court's groundbreaking 6-3 ruling declaring that LGBT employees cannot be fired solely on the basis of their sexual orientation or gender identity, Pineda noted he was "proud" to second the motion to fly the flag.

In explaining his support for raising the rainbow flag, Cruz noted that the city has an adopted diversity statement making it explicit that it is committed to promoting an "atmosphere of respect for all residents and employees" including those who are LGBTQ people or belong to another marginalized group.

San Pablo becomes the 13th city in Contra Costa County to agree to fly the rainbow flag, the international symbol for the LGBTQ community, during Pride Month in June. The Pride flag has already been raised in the cities of Antioch, Clayton, Concord, El Cerrito, Hercules, Lafayette, Martinez, Orinda, Pinole, Pittsburg, Pleasant Hill, Richmond, and Walnut Creek. The San Ramon City Council will vote on flying the flag when it meets June 23.

It is part of a push by LGBT advocates in the county to see all 19 cities in the jurisdiction celebrate Pride Month in some manner this year for the first time. It is expected to achieve a countywide Pride sweep in the coming days when the cities of Brentwood and Oakley issue Pride proclamations next Tuesday and Moraga follows suit the next night on June 24.

As the B.A.R. has reported, the flying of the rainbow flag has become a flashpoint in a number of Bay Area cities this year. Also Monday night on a 3-2 vote the city council in Foster City adopted a flag policy and agreed to raise the Pride flag, two weeks after the council members had rejected requests that they do so.

Staff in the San Mateo County city will raised the flag June 17 at City Hall. It will remain flying through the end of June. LGBT leaders on the Peninsula are also working to see that all 20 cities and towns in their jurisdiction mark Pride Month in some manner this year; the last to do so was Atherton, which is issuing a Pride proclamation this Wednesday, June 17.

The council vote in San Pablo came after the governing body earlier this spring adopted its own flag policy. It was sparked by requests that the city fly a flag honoring Christian faiths, which the new policy prevents the city from doing because it prohibits religious flags from being displayed on city-owned flagpoles.

City Councilman Rich Kinney referred to that decision in stating why he was voting against raising the rainbow flag. He called the rejection of the Christian group's flag discriminatory and criticized his trio of council colleagues for "ganging up" to push through the Pride flag request.

"It is appalling to me that this city council is supporting any kind of discrimination. This is selective discrimination; you all know that," said Kinney. "You are personally selecting what you are going to discriminate against."

The city's vice mayor, Elizabeth Pabon-Alvarado, noted she has a gay granddaughter that she "loves to pieces" but believes her sexual orientation doesn't mean she has "any more value or less value than the rest of my grandchildren." She added that, "Sexual orientation will not create in our family a segregation of gay versus straight."

For that reason, Pabon-Alvarado said she didn't support having the city fly the rainbow flag.

"I also want to add by flying the rainbow flag, we are disregarding other groups struggling right now," she said, pointing to the protests over the police killings of African Americans and how both blacks and the elderly have been particularly hit hard by the novel coronavirus outbreak.

"I vote no to show I support all communities and their struggles," said Pabon-Alvarado. "This is what it is to be inclusive."

The Pride flag is not only political in nature, said Kinney, but excludes straight individuals.

"The LGBTQ flag is very political. There is no way it should be seen as any less political than a religious flag," said Kinney, adding that the rainbow flag "is about people's sexuality, their sexual activity and preferences. It has no place on a city flagpole people. This is crazy."

Kinney said he couldn't understand how his colleagues could support flying it.

"I have no issue with people who have different sexual preferences than me," he said, "but I am not trying to get a straight sexual flag agenda on our flagpole."