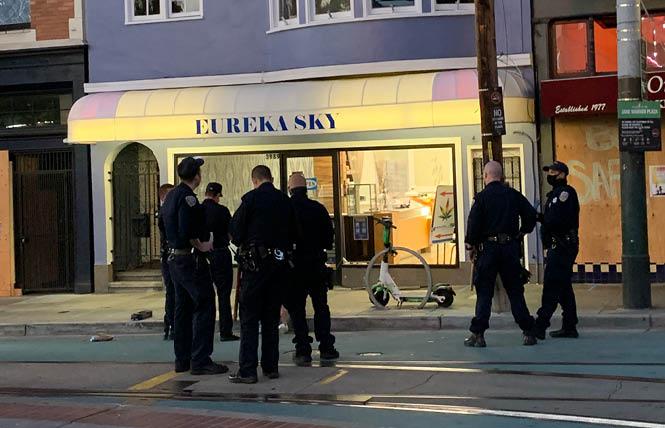 San Francisco police were called early Thursday to a report of a break-in at Eureka Sky, a cannabis retail store in the Castro. Photo: Michael Yamashita

An arrest has been made in an alleged break-in early Thursday at Eureka Sky, a cannabis retail store that opened in the Castro in February.

Police responded to a report of burglary on the 3900 block of 17th Street at 5 a.m. June 11 and found the window to the storefront broken out, a spokesperson said.

Officers arrested John Shelton, a 36-year-old San Franciscan, and took him to the county jail where he was booked on suspicion of looting, vandalism, and resisting arrest.

"A representative from the business arrived on scene and determined that nothing was missing from inside," a police spokesperson stated in an email to the Bay Area Reporter mid-Thursday.

This is the second Castro break-in in as many days. As the B.A.R. previously reported, police made an arrest in the matter of an alleged break-in at Yankee Clipper Travel at 4115 19th Street (between Castro and Collingwood streets).

The police want callers, who can remain anonymous, to leave any tips they have at the San Francisco Police Department tip line at 415-575-4444.

Eureka Sky held its grand opening February 1; it is one of two cannabis dispensaries in the Castro area, the other being the Apothecarium at 2029 Market Street.

It is owned by Romwald (Ray) Connolly, his husband Desmond Morgan, and Chris Callaway.

The owners were the recipients of the city's first cannabis equity permit late last year.