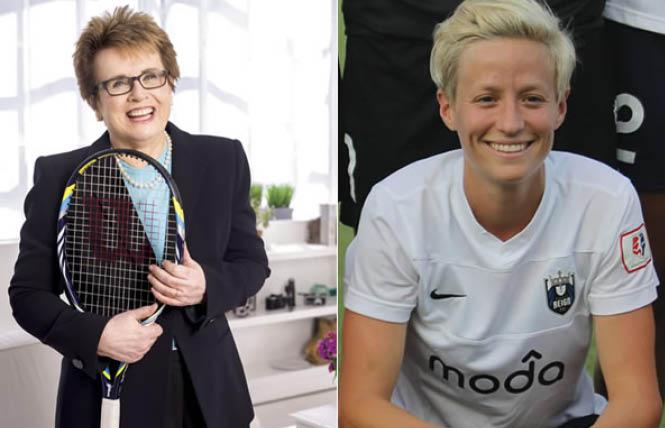 Lesbian athletes Billie Jean King and Megan Rapinoe are calling on the National Collegiate Athletic Association to move a major basketball competition from Idaho in the wake of the state enacting a law barring transgender girls from playing in school sports.

In a letter dated June 10, the athletes ask to "move all NCAA championship events in 2021 out of Idaho," which is currently set to host the 2021 Men's Basketball Championship that year.

"As the unifying governing body of college athletics, the NCAA has tremendous power in setting the standard for how values of diversity and inclusion can be reflected in policies and practices, and inspiring athletes, teams, schools and other institutions to do the same," the letter says. "This is the time for the NCAA to stand with us on the right side of history, in support of the rights of all athletes in Idaho to compete in the sports they love."

Separate letters from advocacy groups and more than 400 college student-athletes were made public Wednesday also denouncing House Bill 500, an anti-trans measure quietly signed into law by Idaho Governor Brad Little (R) at the height of the coronavirus crisis, and they call on the NCAA to move sports events out of the state.

The law requires college and public school sports teams to be designed as male, female and co-ed — and any female athletic team "shall not be open to students of the male sex."

In the event of a dispute, a student may be required to produce a physician's statement to affirm her biological sex based on reproductive anatomy, normal endogenously produced levels of testosterone and an analysis of the student's genetic makeup.

That would effectively ban transgender athletes from participating in sports. Although similar measures had been percolating in state legislatures, Idaho is the first state to enact such a law.

Hudson Taylor, executive director of LGBTQ group Athlete Ally, said in a statement the athletes against House Bill 500 "took a powerful stand in support of trans athletes having equal access and opportunity in sport."

"With one unified voice, professional athletes, student athletes and advocacy groups are demanding the NCAA stand on the right side of history by reaffirming their commitment to ensuring sport is safe and welcoming for all, and that trans athletes are able to be fully who they are on and off the playing field," Taylor said.

Prior to the enactment of House Bill 500, the Idaho High School Activities Association already had in its rules a requirement that transgender girls "complete one year of hormone treatment related to the gender transition before competing on a girls team."

According to the Idaho Statesman, IHSAA says as of March 2020 it had "received just a couple of inquiries about Idaho's policy and has fielded occasional calls about potential transgender athletes over the past five or six years, but so far, Idaho has not had an athlete use the policy."

Although the NCAA hasn't yet indicated it would move sports events from Idaho over enactment of House Bill 500, the organization did issue a statement against the law, according to advocacy groups.

Rodrigo Heng-Lehtinen, deputy executive director for policy and action with the National Center for Transgender Equality, said in a statement the sports league should back up its earlier stated opposition with action.

"Transgender athletes deserve the same dignity and respect entitled to all NCAA athletes. Because of HB 500, that simply isn't possible in Idaho," Heng-Lehtinen said. "We applaud the NCAA for speaking out against HB 500 and now encourage them to back up their words with action."

If the NCAA decides to move sports events from Idaho over the law, it wouldn't be the first time the league has taken such action over an anti-trans measure.

When North Carolina passed House Bill 2, which prohibited transgender people from using restrooms in government buildings consistent with their gender identity, the NCAA joined other sports leagues and businesses in cancelling events in the state.

Former North Carolina Governor Pat McCrory (R), who signed House Bill 2, lost reelection to now-Governor Roy Cooper (D), who worked with the Legislature to enact a compromise measure loosening the anti-trans restrictions under the law (although transgender advocates still objected to it).

Vanita Gupta, president and CEO of The Leadership Conference on Civil and Human Rights, said in a statement "full participation in school sports is fundamentally a civil and human rights issue."

"Anti-transgender discrimination has no place in any of our institutions, including school athletics," Gupta said. "The NCAA must uphold its own non-discrimination policy, and we urge them to relocate games from Idaho while HB 500 is law."

Meanwhile, litigation against House Bill 500, which was filed in April by the American Civil Liberties Union, the ACLU of Idaho, Legal Voice, and Cooley LLP, remains pending in federal court.

Arli Christian, campaign strategist for the ACLU, said in a statement "transgender people belong everywhere — and that includes in sports and in Idaho."

"While the lawsuit against the state of Idaho moves through the courts, it is important for everyone to speak out so that Idaho — and the rest of the country — sees how misguided and dangerous this law is," Christian said.

The Washington Blade has placed a request with the NCAA seeking comment on whether the organization will move events from Idaho over the anti-trans law.