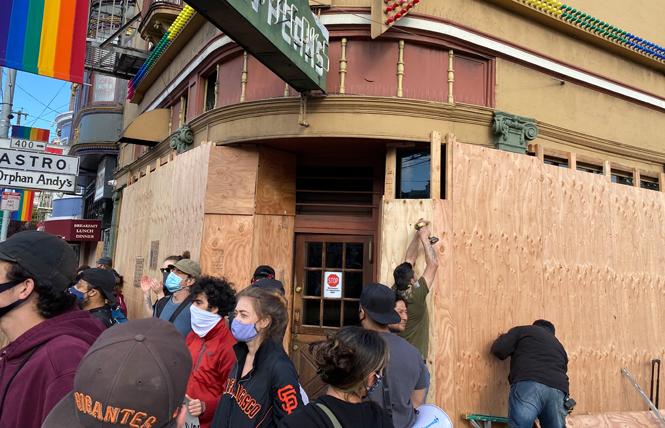 Twin Peaks in the Castro has been shuttered, along with other bars, since shelter-in-place orders went into effect due to the novel coronavirus outbreak. Photo: John Ferrannini

A petition from nightlife representatives to San Francisco elected officials to "Let SF Bars open Responsibly" has obtained over 6,000 signatures as of midday Wednesday — including that of Mayor London Breed.

The petition was started in response to Breed's May 28 announcement that her goal is to reopen bars in mid-August, while dine-in restaurants may be able to reopen as soon as mid-July. The city is currently planning on allowing restaurants that meet certain requirements to seat customers outdoors beginning June 12.

The petition is addressed to Breed and the 11 members of the San Francisco Board of Supervisors. Breed signed the petition, along with gay state Senator Scott Wiener (D-San Francisco).

A spokesperson for the mayor stated that she will speed up the pace of reopening if public health officials "feel comfortable enough" to sign on.

"While our top priority remains protecting public health, the mayor knows that businesses and employees are struggling right now and she understands their pain," the spokesperson stated in an email to the Bay Area Reporter on June 10. "She wants to allow bars and other businesses to resume as quickly as possible with additional protective measures in place. The city's reopening plans are constantly being re-evaluated based on our local COVID-19 data and evidence from other localities. If our public health officials feel comfortable enough to speed up the pace of reopening, we will do so."

In a statement June 10, Wiener discussed how central nightlife is to queer history, both personally and in the cultural sense.

"Nightlife helps define San Francisco in a fundamental way, particularly for the LGBTQ community" Wiener stated. "For many of us, nightlife helped us come out and helped us find our community. We need to act quickly to ensure bars and other nightlife businesses can survive. The last thing we need is a permanent mass closure of nightlife."

Supervisor Rafael Mandelman, the board's lone LGBT representative, stated in a June 10 email to the B.A.R. that "my office has been working with many bars and restaurants in District 8 to help them reopen safely."

"It does not make sense to me for bars to be treated differently than restaurants and for bars' ability to open to be tied to food service," Mandelman stated. "I am hopeful that we will not see a significant surge [in COVID] before July and that we will be able to move forward with indoor dining. When we do that, we should allow for bars to reopen as well, in a responsible way that limits the risk of spreading the coronavirus."

The petition states that "we are respectfully asking the city to reconsider and allow bars to reopen July 13th instead, at the same time as restaurants. One extra month of service might not sound like much, but for many bar owners and their employees it's literally the difference between economic survival and catastrophe."

"Bars can provide a safe, responsible, SUPERVISED environment for patrons with social distancing, partitioning, capacity limitations, and group sizes strictly enforced. Dedicated staff can disinfect and sanitize before and after patrons, which is certainly not happening in people's apartments or on packed sidewalks/picnic tables in the park where people are currently gathering. Responsible bars can be a part of the solution!"

"My point is that if restaurants, dispensaries, coffee shops, etc., can open responsibly, why are bars not being given the same option?" Heklina wrote in an email to the Bay Area Reporter late June 9. "This, to me, is a clear anti-bar bias existing within the Department of Public Health. Clearly, they think we are hooligans who can't be trusted to monitor and safeguard our customers, which is nonsense. There are thousands of restaurants in SF, and only just over 300 bars, so if we are looking for a spike I really don't think it will be because of people stopping in to their favorite watering hole for a drink."

Bleiman did not respond to a request for comment.

San Francisco's bars closed March 15 and 16 in compliance with an order from California Governor Gavin Newsom intended to slow the spread of the novel coronavirus, which since its arrival in the United States has killed over 100,000 Americans.

Newsom has since announced guidelines for bars to reopen as early as June 12, though that decision will be made on a county-by-county basis. Some bars, such as Lookout in the Castro, have reopened for to-go orders under updated state Alcoholic Beverage Control policies.

Cecil Russell, a gay man who is the head of Cecil Russell Presents and Gloss magazine, told the B.A.R. by phone June 10 that he feels it doesn't make sense for San Francisco bars to stay closed while surrounding counties will soon allow them to open with restrictions.

"Obviously if it's done responsibly it should be moved up," Russell said. "I feel San Francisco is being too conservative. People will be able to travel to San Jose and go to a bar then come back here. These poor bars have been closed for months and we've been very good here, we've done our part, and these businesses have the right to survive."

Mandelman: Large public gatherings likely
As the B.A.R. previously reported, Russell was part of a group of nightlife and business figures in the LGBT community who wanted Pride festivities postponed instead of canceled due to the effect of a total cancellation on small businesses.

After subsequent protests against police violence in the wake of the killing of George Floyd last month have brought thousands into the streets, Los Angeles Pride announced a march in solidarity with Black Lives Matter for the time that its annual Pride parade would have been held.

But Los Angeles Pride will no longer be involved in this march after it was learned the LA organization did not consult with black community leaders before announcing the solidarity march.

There are no street closures that are being applied for with the San Francisco Municipal Transportation Agency this year due to Pride-related events, according to spokeswoman Erica Kato in a June 10 email to the B.A.R.

Mandelman stated that public gatherings are likely, and his office has asked the city to provide ways to mitigate the risk of such gatherings.

"My office has helped, and will continue to help, people who want to organize protests to have their voices heard. I also anticipate that with Pride upon us, further large public gatherings are likely to happen, whether or not officially sanctioned," Mandelman stated in a June 10 email to the B.A.R. "We have asked the city's Emergency Operations Center to produce guidance on how to gather in a safer way and have been encouraging organizers of gatherings to make sure attendees wear a mask and do their best to stay six feet apart."

Mandelman stated that his office helped secure thousands of masks for protesters last week at a demonstration that began adjacent to Mission Dolores Park.

"Opening our restaurants is a great step that will help our small businesses that are struggling, our workers who need paychecks, and our residents who are ready to safely sit outside and enjoy a meal," Breed stated in a June 9 news release. "We have supported our small businesses with economic grants and assistance throughout the pandemic and will continue to provide health guidance to help keep their employees and customers safe. Our continued reopening is dependent on each of us, as customers, employees, and San Franciscans to do our part by wearing our face coverings, keeping social distance, staying home if sick, and following the other health guidelines that will slow the virus spread."

An SFMTA spokesperson stated that those who want to ask that a sidewalk or parking space be closed for outdoor restaurant seating may do so when a form goes online Monday, June 15. Decisions will be made by the Interdepartmental Staff Committee on Traffic and Transportation.

As the B.A.R. previously reported, some blocks of Castro Street as well as Jane Warner Plaza were being considered for at least partial closures.

"There may be times Castro Street is closed off to traffic," Mandelman said last month.

Mandelman stated he is consulting with business owners, the Castro Merchants, and the Castro/Upper Market Community Benefit District to negotiate street closures that would have community support.

"Many Castro businesses should now be able to expand quickly into sidewalks and parking spaces under the Shared Spaces program, and my office is working with individual business owners to help troubleshoot issues and clear bureaucratic hurdles as this program rolls out," he stated in a June 10 email. "We have been talking to business owners and residents about what they want to see and where they feel street closures could have the biggest impact in supporting Castro restaurants, bars, and retailers."