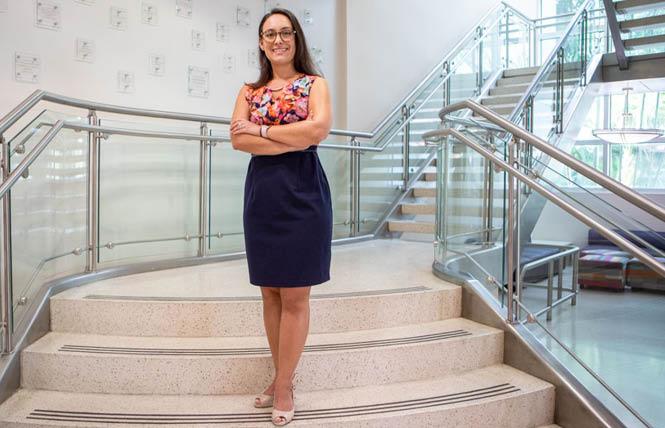 A new study will provide free family support services to Hispanic and/or Latino LGBTQ youth to determine which strategies will increase family acceptance and reduce the risks stemming from rejection, such as suicide.

The Florida study is the brainchild of Karina Gattamorta, a research associate professor at the University of Miami School of Nursing and Health Studies.

She is taking family support models developed based on the experiences of Hispanic and/or Latino families with LGBTQ youth and is introducing them to families for free in the state of Florida, where she hopes these will "reduce serious health risks and increase support for Hispanic LGBTQ youth."

The Family Acceptance Project was first initiated at San Francisco State University by Caitlin Ryan and Rafael Dìaz in 2002.

"We needed to have a study to create an evidence-based model for helping LGBT youth and their families," Ryan said in a phone interview with the Bay Area Reporter on June 4. "From the beginning we did research with Latino parents with LGBT kids throughout California; and, of course, we also worked with families of other racial, cultural, and religious backgrounds."

The Family Acceptance Project led to the creation of the "first evidence-based family support model" for families with LGBTQ youth.

The model encourages parents to fully accept their children for who they are, instead of refusing to discuss — or in some cases acknowledge — their child's sexual orientation or gender identity. Ryan and Gattamorta said that this silence is connected to negative health consequences for LGBT youth, such as suicide, drug abuse and HIV infection.

Gattamorta has worked "on a variety of research projects — mostly about the Hispanic population," she said in a June 4 phone interview with the B.A.R.

"We have a large [National Institutes of Health]-funded health disparities research center," she said. "I got interested in the intersectionality of being a cultural minority and a sexual minority and was so shocked to see there was so little research. I came across the work Caitlin [Ryan] had been doing, and reached out."

Ryan said that having supportive families is particularly important for Hispanic and/or Latino LGBTs.

"One of the big challenges has been cultural and religious beliefs because family is the heart of the culture," Ryan said. "But because of the enormous economic disparity, lack of access to services, and the barrier of language for many, there hasn't been a way to provide guidance to families that was culturally appropriate."

Ryan and Gattamorta said that they did not want guidance to be imposed, but rather to tap into the natural strength of Hispanic and/or Latino families.

"One of the strengths in this project is we have found specific behaviors parents engage in that result in risk — suicide and depression — and on the other side there are positive behaviors," Gattamorta said. "We want to help people increase positive behaviors. For example, the family mobilizes and provides incredible support during pregnancy. We know this shows the nurturing impact of family, and that's the most important thing in this work."

Ryan said that the study will look at the correlation between family behavior and 100 particular behaviors in total among LGBT youth, some of them constructive and some destructive.

"These behaviors are common across cultures," Ryan said. "We're not forcing anyone to change their beliefs, but we want to show people how when the conflict [between traditional beliefs and LGBT identity] increases, families can become fractured, and that ties that help people be supportive even as they are learning what it means to have an LGBT child."

The study will involve youth aged 12-21. Online appointments with service providers has made it possible for the study to involve Hispanic and/or Latino families from all over the state and not just in South Florida, Gattamorta said.

To contact Gattamorta for information pertaining to the study, and participation in it, email her at UMfamilyacceptance@gmail.com