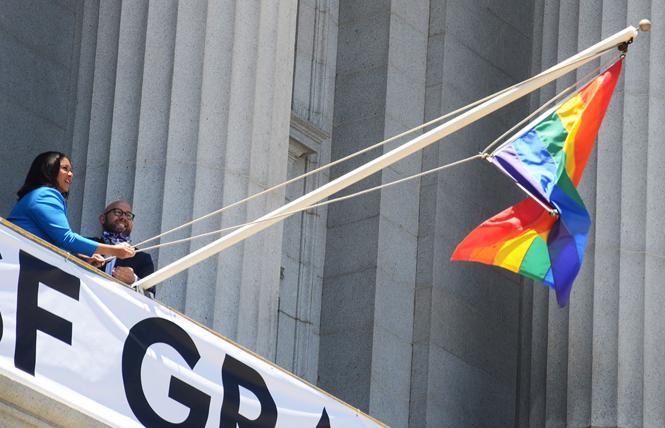 Breed was joined by gay District 8 Supervisor Rafael Mandelman for the June 3 afternoon flag raising. The event was originally to be held Monday, but the mayor, actor Jamie Foxx, and hundreds of others joined in a kneel-in to protest the May 25 police murder of George Floyd in Minneapolis.

The mayor pointed out that the city has a deep legacy of resistance against oppression from the Compton's Cafeteria riots in 1966, from the AIDS crisis, and from the ongoing attacks from the federal government on LGBTQ rights.

This year's in-person San Francisco Pride events have been moved online due to the novel coronavirus. SF Pride is participating in the virtual Global Pride June 27 and will have its own online programming June 27-28. In keeping with that, the San Francisco LGBT Pride Celebration Committee and Breed will start the virtual festivities Friday, June 5, at noon with a special Pride at Home streaming event.

Carolyn Wysinger, president of the SF Pride board, will moderate "Pride in Defense of Black Bodies," a conversation about the legacy of Pride and the community's path forward. Participants will include Breed, Transgender District Executive Director Aria Sa'id, National Center for Lesbian Rights Executive Director Imani Rupert-Gordon, and Tuquan Harrison from the San Francisco Human Rights Commission.

In addition to the mayor and SF Pride, the event is co-hosted by Manny's, the gay-owned event space in the Mission; SF Queer Nightlife Fund; the San Francisco Office of Transgender Initiatives; and the SF Bay Area LGBTQ+ COVID-19 Relief Coalition.

"LGBTQ Pride Month is an important time of the year, because it allows us to reflect on the legacy of our LGBTQ communities," Breed stated. "It's also a celebration of the community's hard-fought progress, strength, resilience, and leadership against all odds."

Wysinger said that the SF Pride board and staff are "outraged by the acts of anti-black violence that have resulted in the loss of Tony McDade, George Floyd, and Breonna Taylor's lives at the hands of law enforcement."

Taylor was shot in her bed by white police officers in Louisville, Kentucky who stormed her apartment. McDade, a trans man, was reportedly shot by police in Tallahassee, Florida May 27.

"We also speak the name of Ahmaud Arbery, who was murdered by ordinary citizens playing out law enforcement fantasies," Wysinger added.

Arbery was shot by two white men — a father and son — as he jogged through their Brunswick, Georgia neighborhood February 23. For months Arbery's family and friends had called on authorities to arrest the men but local prosecutors either recused themselves or argued they had not committed a crime. The father, Gregory McMichael, is a former Glynn County police officer and a former investigator with the local district attorney's office who retired last May.

After the killing gained national media attention in May and swift public outcry following the release of a video that showed the brutal shooting death, the Georgia Bureau of Investigation took over the case. Within days both McMichael and his son Travis McMichael were arrested, along with the man who shot the video.

"We acknowledge that all of these deaths happened because of a culture of policing that encourages extra scrutiny and policing of black bodies," Wysinger added. "We stand firmly against all of these actions."

In other city-related Pride Month news, the San Francisco Arts Commission held a moment of silence at its meeting Monday, June 1, to honor the lives of those killed by police and at least 12 trans people killed so far this year. Arts Commission President Roberto Isaac Ordeñana wrote in an email message, "Our communities mourn and call out the injustices facing black lives at the hands of police around the country and around the globe."

In addition to the Pride at Home event Friday, other SF pride events include a virtual Trans March Friday, June 26, from noon to 7 p.m.