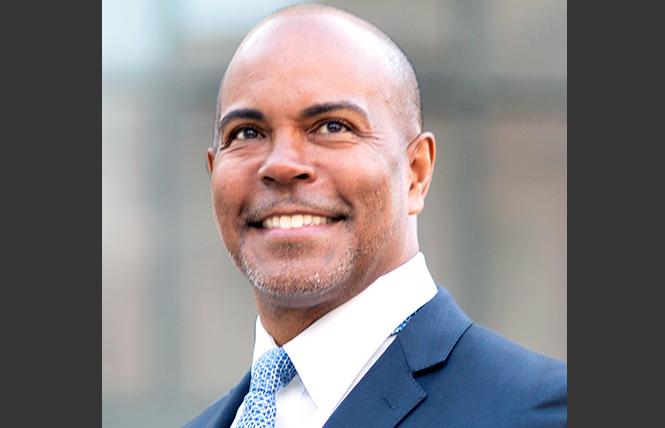 Derreck Johnson announced Tuesday that he is seeking the at-large seat on the Oakland City Council. Photo: Courtesy Johnson campaign

Johnson's campaign announced the early endorsement from Schaaf Tuesday as he launched his bid for the citywide council seat that Kaplan has held since 2009. Schaaf defeated Kaplan in the 2014 mayoral race and the former City Council colleagues have often been at odds over policy and personnel issues ever since.

"Derreck Johnson was made in Oakland. And he was made for this unique moment in our city," stated Schaaf in a news release from Johnson's campaign. "I need Derreck at City Hall, working with me to lead Oakland's recovery and take on the long-term challenges that lie ahead."

Kaplan, elected council president last year, did not respond to a request for comment by press time. There had been speculation that she might run for Oakland city attorney this November, as Barbara Parker is also up for reelection. But Kaplan pulled papers last July to seek another four-year term on the council.

In the news release his campaign issued, Johnson said he was "honored to have early support from Mayor Libby Schaaf, who I look forward to working with in the years ahead."

Johnson, 55, told the Bay Area Reporter in a phone interview that he had been thinking about running for the council seat earlier this year and had sought advice from U.S. Senator Kamala Harris (D-San Francisco). She suggested he reach out to Schaaf, Congresswoman Barbara Lee (D-Oakland), and Alameda County Supervisor Nate Miley.

Of the three Schaaf was the only one he was able to reach, said Johnson. She had appointed him to the Oakland Workforce Development Board roughly five years ago.

"I decided to run because I have been a direct recipient of Oakland politics for years that I haven't been a fan of as a small business owner," said Johnson, who opened Home of Chicken and Waffles in Oakland's waterfront Jack London Square district in 2004.

He helped found the group Oakland Indie Alliance with other small business owners to serve as a voice for their needs and concerns at City Hall. Being elected to the City Council will give him an even bigger platform to press for the needs of Oakland's local merchants and business community, said Johnson.

And the outbreak of the novel coronavirus and how the health crisis has been devastating to business owners in various industries only cemented his resolve to seek the council seat this year, said Johnson.

"I don't have a political background. But I felt the needs of and voice of the people really need to be heard," he said. "I am tired of being involved with elected officials who show up at this time of year, election time, and then no other time since. That is definitely not me; I am involved in the community. Everything I do is in Oakland, hopefully I can make an impact."

Oakland native
A third-generation Oakland native, Johnson grew up in the city's Acorn projects and was raised by a single mother who worked three jobs. He graduated in 1986 with a degree in sociology and economics from Fisk University, a private historically black university in Nashville, Tennessee. After briefly moving to New York, Johnson returned to his hometown.

He owned a number of businesses, from a car detailing company to car washes, and early on hired ex-offenders as his employees, many of who had struggled to find work after leaving prison. Johnson told the B.A.R. his doing so grew out of a need to bring on more staff one day when his car washing business was inundated with customers.

"I had this guy working for me and we were short staffed. He said, 'I could call my house and get some of my brothers to come work.' I had no idea he was talking about a halfway house," recalled Johnson.

They were hard workers and appreciative of having a paycheck, he added. When he opened his restaurant roughly 70% of the people he hired were formerly incarcerated people. Three years ago, Johnson relinquished day-to-day management of the eatery to his employees but continues to hold weekly meetings.

"I thought I was going to retire from the restaurant business," he said.

In 2017 Johnson and a female friend he considers to be a little sister began investing in properties in Columbus, Ohio, and he had been splitting his time between the Bay Area and the Buckeye State. He is currently living in West Oakland after selling his home of 17 years in the city's Sequoyah Hills neighborhood.

His restaurant has seen sales drop 70% due to the health crisis. This week it began making 200 to 300 prepared meals a day for area schools through a contract it received from The Eat. Learn. Play. Foundation founded by Stephen and Ayesha Curry and the World Central Kitchen, created by celebrity chef José André.

"Business had been tough. We were very scared, extremely scared," said Johnson, who is starting to see more of his customers return.

He is now pivoting to focus full-time on his campaign and reach out to voters, much of which he will do virtually or by phone. Johnson pointed to the city's high housing costs and growing homelessness population as two main issues he plans to focus on during the campaign. Getting businesses open again and residents back to work safely in light of COVID-19 is another top priority for Johnson, who released a plan for doing so on his campaign website.

"I feel people are tired of listening to political jargon and tired of listening to talk, talk, talk. They really want to see real world leadership," said Johnson. "Housing is a huge issue in Oakland. Homelessness is a huge issue in Oakland. You talk about policies on it, but it is still growing. So there is a disconnect there and we have to eliminate it."