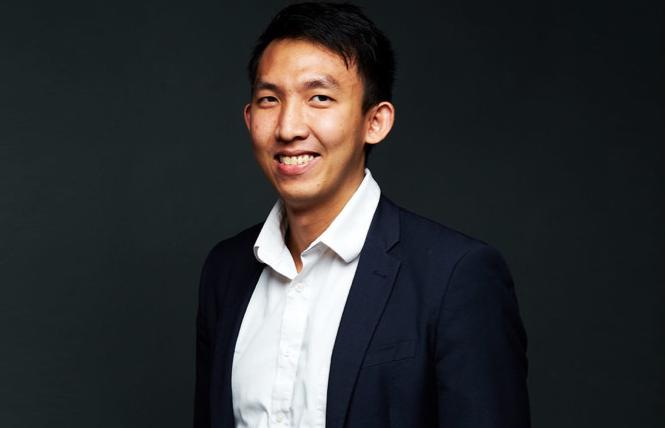 Hans How is one of several LGBT leaders backing a San Francisco charter amendment that would allow immigrants to serve on city boards and commissions. Photo: Courtesy Hans How

San Francisco political and community leaders will be asking voters this fall to change the city's charter so that immigrants who are not U.S. citizens can serve on public oversight bodies that advise City Hall on a wide array of issues. It follows a change in state law last year that allowed non-citizens to be appointed to statewide oversight and advisory bodies.

Locally, the move to amend the charter follows the passage of a ballot measure in 2016 that allowed non-citizen voting in San Francisco school board elections. It will be implemented for the first time with this November's race for four school board seats.

District 10 Supervisor Shamann Walton and board President Norman Yee, who represents District 7, introduced what is known as the Aspiring Citizens' Charter Amendment during Tuesday's board meeting. It will be taken up in committee in June and is expected to be placed on the fall ballot as all 11 supervisors, with District 2 Supervisor Catherine Stefani coming on board Tuesday afternoon, supporting the charter amendment.

The measure would replace the requirement that members of the city's boards, commissions, and advisory bodies be United States citizens and registered voters. Instead, the oversight body members would need to just be residents of the city and of legal voting age in municipal elections, currently set at 18. There is also expected to be a ballot measure in the fall seeking to lower that age limit to 16.

The change in policy, said Walton during a virtual news conference, is "something we should have done in San Francisco a long time ago." He expressed confidence it would be passed by the voters; it needs a simple majority vote to be approved.

"In San Francisco we have always worked hard to ensure that no community is left behind," he said. "For this reason, I am excited and honored to be a part of this historical ordinance."

Yee noted that due to the policy, the city's immigrants rights commission can't have any immigrants serving on it unless they have become U.S. citizens. He said that makes as much sense as having a youth commission that bans youth from serving on it.

"The city has many entry points for civic participation and engagement. One of the most basic is serving on advisory committees or oversight bodies to advise the mayor and supervisors on important issues," noted Yee, ranging from pedestrian safety and mental health to aging and health care services. "All San Francisco residents should have the ability to serve and provide meaningful input."

Gay District 8 Supervisor Rafael Mandelman is among the nine co-sponsors of the charter amendment. He told the Bay Area Reporter he backs the policy change because people investing in their community should be able to do so regardless of their citizenship or immigration status.

"I think it makes a lot of sense, particularly given the federal government has completely failed to enact meaningful immigration reform going on a decade now or create a path to citizenship for millions of people who should be treated as Americans," he said.

A number of LGBT immigrants and advocates for asylum seekers and others are part of the Aspiring Citizens Empowerment Committee that is helping to lead the campaign this fall. One, Hans How, 27, is a gay man who faced persecution in Malaysia, a country that carries a possible jail sentence of up to 20 years for LGBTQ citizens, and is now seeking asylum in the U.S.

The volunteer vice president of Asylum Connect, a tech nonprofit that created a website and mobile app for LGBTQ+ asylum seekers, How has lived in San Francisco for three years and has been awaiting an asylum interview for the past two and half years.

He would like to be appointed to a city advisory panel and is hopeful voters will grant him that chance come the November 3 election.

"I think in San Francisco, as a city that celebrates diversity and the people living in the city, our boards should reflect the city we serve," said How during a phone interview with the B.A.R.

During the news conference Klaus U. Ume, a gay asylum seeker from Nigeria who now lives in San Francisco, explained that being allowed to participate on civic panels would provide immigrants with a sense of belonging in their adopted city.

"Why this project and whole thing is very important to me is I need to know I belong and I am a part of something big, of something happening here, and that I contribute," said Ume, who after 30 years in his home country found it impossible to be out and own a business.

District 11 Supervisor Ahsha Safai is seeking to place on the fall ballot a measure that will impose term limits on those who are serving on city oversight panels and commissions. He is also backing the charter amendment to allow for immigrant commissioners.

"People who get up every day, pay their taxes, contribute to their society, and have children in city schools are such an integral part of the city. They should be allowed to serve," said Safai.

Gay SF college leader to step down
Gay City College board member Alex Randolph will be leaving the oversight body at the end of the year, as he announced Monday he will not seek reelection to another four-year term on the November ballot. One of three out board members, Randolph was first appointed to a vacant seat in 2014 and served as its president last year.

He helped lead the fight to maintain the college's accreditation, hire new leadership for the campus, and pass a $845 million bond measure in March to help upgrade the institution's facilities and buildings. But his tenure on the board has also overlapped with crushing budget deficits, the cancellation of classes, and the recent removal of its chancellor following an outcry over his seeking raises for administrators.

In his May 4 Facebook post about his decision, Randolph wrote that he had time to reflect while his military husband, Trevor Randolph, is deployed overseas in Afghanistan while he is sequestered at home in light of the novel coronavirus outbreak. The couple would like to have children, leading Randolph to decide to take a break from elected office.

In a message to the B.A.R. he explained that he isn't totally done with public service, as he could run for election in the future.

"I've never mapped out my entire life in advance but taken opportunities as they come up. If elected office in the future comes up as a way to continue my public service in a positive and productive way I am open to it," wrote Randolph.

Also leaving the college board this year will be Ivy Lee, who had announced last year that she would not run for reelection. Both Shanell Williams, a bisexual woman who is the current board president, and Tom Temprano, a gay man who is vice president, will be seeking re-election this fall.

"My political energy this year will be focused on getting Shanell and Tom reelected and defeating [President Donald] Trump," Randolph told the B.A.R.

Third airline moves into Milk SFO terminal
Next Tuesday, May 12, American Airlines will become the third airline to move its ticket counter and baggage claim locations into Harvey Milk Terminal 1 at San Francisco International Airport. Both JetBlue and Southwest moved their operations into the terminal in late April.

The new nine-gate section used by the airlines is in what is known as South Harvey Milk Terminal 1. It is named after the city's first gay supervisor who was killed 11 months after taking office in 1978.

American's ticket counter area is closest to a permanent photographic exhibit that honors Milk located in what has been dubbed the Central Inglenook. It became accessible to the public last month when the new terminal section opened up to passengers after its March debut was delayed due to the health crisis.

The Milk terminal, the first airport facility to be named after an LGBT person, is undergoing a phased $2.4 billion remodel expected to finish in 2023. To see the Milk exhibit online, visit https://www.sfomuseum.org/exhibitions/harvey-milk-messenger-hope

UPDATED 5/5/20: to include District 2 Supervisor Catherine Stefani joining her 10 colleagues in support of the charter amendment allowing immigrants to serve on city oversight bodies.