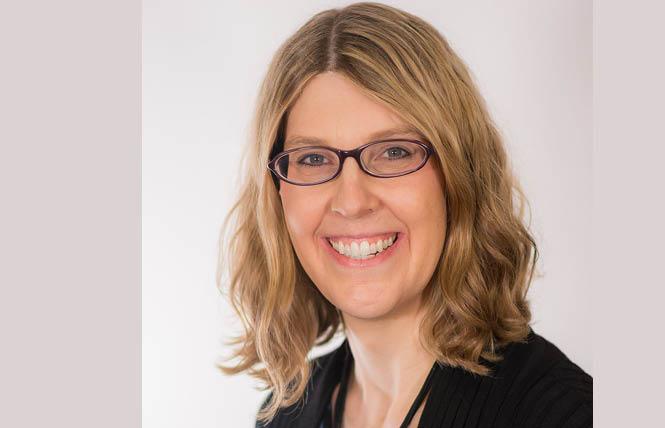 "There's rampant discrimination against nonreligious people that often results in concealment of their identities, even in less religious areas," Alison Gill, a trans lesbian who is the vice president for legal and policy of American Atheists, said in a phone interview with the Bay Area Reporter. "The stigma increases as states get more religious."

Gill said that LGBT people are overrepresented among the nonreligious due to the treatment of them by many organized religions, and that those LGBTs who are nonreligious often face a deeper stigma due to both being queer and secular.

Indeed the study showed 43% of the LGBTQ people surveyed had very or somewhat unsupportive parents, compared with about 35% of others.

Those with unsupportive parents were 71% more likely to have depression.

"It's pretty significant that among LGBTQ people, about 50% are religiously unaffiliated," Gill said. "I think it's for a few different reasons: a lot of belief systems teach that being LGBTQ is wrong, and so that stigmatizes LGBTQ people. There's a lot of religious trauma as well. They may not be able to be comfortable associating with a religious group."

Gill said that as LGBTQ people accept themselves, sometimes in spite of their churches, they may end up questioning other teachings unrelated to homosexuality specifically.

Gill pointed out that the nonreligious people being referred to in the study primarily identify as atheists, agnostics, and humanists. They are not the so-called nones: which constitute almost one-third of the U.S. population, larger than any specific religious denomination.

While "nones" do not identify with a denomination or faith tradition, many report being religious or spiritual personally. According to the Pew Research Center, two-thirds of nones believe in a God or higher power.

EJ Sorrell, a 23-year-old transgender masc nonbinary person, grew up in Texas but now lives outside Los Angeles. Sorrell said in a phone interview with the B.A.R. that they weren't raised with a religion at home — which made things awkward when they were sent to an Anglican school as a pre-teen.

"My parents didn't prepare me for that," Sorrell said. "It was definitely an isolating experience when you are surrounded by folks who view atheism as an aberration, as something wrong with you."

Sorrell said that they faced criticism for their queer identity within the atheist community. An online video showed Sorrell debating with a person who believes the world is flat, and commenters were making transphobic remarks.

"A bunch of atheists saw queer me and I had people debating what genitalia I had and all the nasty, entitled things people say about queer people's bodies," Sorrell said.

Sorrell said that these comments come from nonreligious people who have not dealt with internalized prejudices.

"It's a specific subset of atheists that do this: former Christians who didn't deconstruct the oppressive norms Christianity gave to society," Sorrell said. "They're prejudiced against women, LGBT people, and feel they are rational and right."

Kevin Bolling, a gay man who lives in Los Angeles, is the executive director of the Secular Student Alliance, which has chapters of nonreligious students in colleges nationwide. Bolling said in a phone interview with the B.A.R. that about 40% of students in the alliance identify as LGBTs, who are fleeing "an increase in Christian nationalism, especially from the Republican Party."

Bolling said that for a lot of people, coming out of the closet as an atheist is more difficult than coming out as LGBT.

"In my own experience, coming out as a gay man seemed easier," Bolling said. "The LGBT community — in the 1980s, 1990s and 2000s — put a lot of emphasis on visibility. Harvey Milk (said) there's power in being out. The community started working together. The nonreligious community is about 10-15 years behind the LGBT community.

"How many out atheists do you know who are role models and create legitimacy that this is OK?" Bolling asked.

Bolling said that there is less stigma against nonreligious people in Europe.

"There's a much longer history of the humanist community in Europe," Bolling said. "There's the presence of separating church from state, even though they don't have it like in our Constitution. Europeans accept and embrace it."