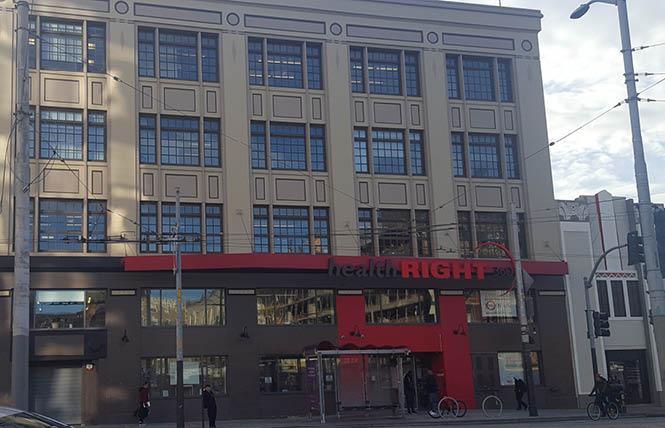 HealthRIGHT 360 will not be moving its Lyon-Martin and Women's Community Clinic to its headquarters until at least July. Photo: Cynthia Laird

Lyon-Martin Health Services and the Women's Community Clinic will not be moving at least through July, according to Erin Mundy, a legislative aide to gay District 8 Supervisor Rafael Mandelman.

The clinics, which primarily serve low-income women, including trans women, were also slated to see a 50-90% reduction in the number of people served, according to HealthRIGHT 360 President and CEO Vitka Eisen. This elicited protests from members of the trans community and members of Service Employees International Union Local 1021 in March (the week before physical distancing to slow the spread of the novel coronavirus was widely practiced). But this, too, won't happen until at least the end of July, Mundy said.

"City funding is going to help keep Lyon-Martin open through July," Mundy said in a phone interview with the B.A.R. May 1. "In addition to providing existing services out of the clinic, Lyon-Martin will continue to provide services to support the city's COVID-response work."

Mundy said that Mandelman and the Department of Public Health did not want the health clinics to move during a pandemic, and wanted to buy time for a longer-term solution.

"Every ounce of the city's energy is focused on COVID," Mundy said. "We wanted a pause to consider this once we move past crisis-point."

In a statement to the B.A.R. May 1, Mandelman said that "a global health pandemic is no time to close community-based health clinics."

"Lyon-Martin is San Francisco's most important provider of trans and gender non-conforming affirming health care and our community cannot afford to lose it," Mandelman stated. "I'm glad Lyon-Martin will still be able to serve San Franciscans."

Mundy told the B.A.R. that Mandelman was instrumental in keeping the clinic at its present location.

"We first learned about the reduction of services — effectively, the closure of Lyon-Martin — in early March," Mundy said. "We had a meeting with Lyon-Martin as well as with the SEIU and HealthRIGHT 360 and that was the beginning.

"We did a lot of work behind-the-scenes to support the workers and get support from the mayor for the initial funding plan," she added.

HealthRIGHT 360 confirmed Friday that it is involved in novel coronavirus response.

"We've received a commitment of support from the city to keep the Lyon Martin and Women's Community Clinic site in operation through the pandemic and are working on a longer term strategy," Lauren Kahn, the vice president of communications and government affairs for HealthRIGHT 360 wrote in an email to the B.A.R. May 1. "As to the COVID-19 services: our clinics are currently screening people who are sheltered in the hotels and we are actively planning to begin testing which will involve our tie-dyed mobile medical clinic."

The deal was initially announced Friday morning on the Instagram page of Save Lyon-Martin, a group of clinic workers who had helped organize the March protest and set up a GoFundMe page to try and prevent the clinics from moving.

"HealthRIGHT 360, Lyon-Martin Health Services and the Women's Community Clinic, and our union, SEIU 1021, are working with the San Francisco Department of Public Health (SFDPH) to finalize a contract that will give us the short-term lifeline we needed to be able to stay at our current location and avoid layoffs and reductions in capacity," the post reads. "We couldn't have done this without your voices and financial support. Our community is powerful and we are so grateful that you are standing with us in our fight to maintain health care services for cis-women, and queer and trans people in the Mission."

"It is because of you that our doors are open today, but the fight is not over. We are not out of the woods yet," the statement continues.

The statement further asks people to continue to donate to the fundraiser and put pressure on public officials.

"As we meet with various stakeholders over the next couple weeks, we will provide updates to ensure transparency in this process and to alert you of actions you can take in solidarity. Please don't hesitate to reach out should you have any questions or concerns," the statement concludes.

Eisen told the B.A.R. in March that the clinic had to be moved and services reduced due to its financial burden on HealthRIGHT 360. She said at the time that the two clinics had lost $5 million in the last six years.

Lyon-Martin Health Services has been part of HealthRIGHT 360 since 2015, and Lyon-Martin moved to its current location in 2017. Founded in 1979, 59% of the patients identify as transgender or genderqueer, and it was named for longtime late lesbian activists Phyllis Lyon and her spouse, Del Martin.

The Women's Community Clinic has been part of HealthRIGHT 360 since 2017 and moved to its present location in 2018. It opened in 1999 and seeks to provide a welcoming environment for low-income women.

Representatives of Save Lyon Martin did not respond to a request for comment.

Updated, 5/1/20: This article has been updated to include comments from Supervisor Mandelman and HealthRIGHT 360.