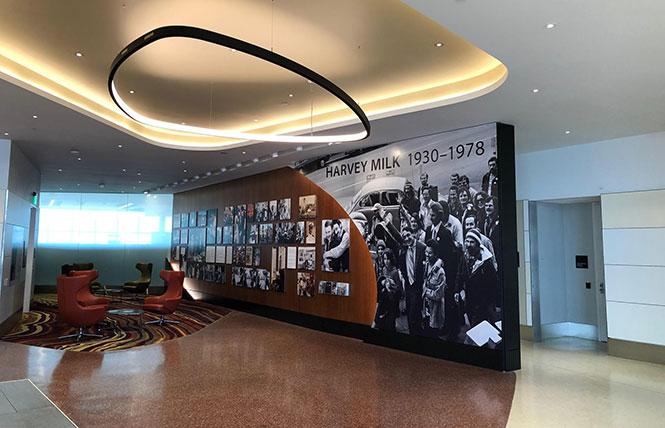 An overview of the Central Inglenook in Harvey Milk Terminal 1 at San Francisco International Airport features photos of Milk's life, and a sitting area that is frequently cleaned. Photo: Courtesy SFO

San Francisco International Airport passengers and visitors will finally get to see the new permanent installation honoring the late gay supervisor Harvey Milk as another section of the under-renovation terminal named in his honor finally opens this week.

Located in Harvey Milk Terminal 1's Central Inglenook is an intimate space featuring 43 images from various stages of Milk's life, including his childhood in New York and his days as a pioneering politician in San Francisco during the 1970s. The exhibit, titled "Harvey Milk: Messenger of Hope," utilizes photos submitted by the public and from the archives of the GLBT Historical Society and the James C. Hormel LGBTQIA Center at the San Francisco Public Library.

It was to have a private dedication celebration in March ahead of its opening to the public March 24, but airport officials had to scrap those plans in light of the novel coronavirus outbreak and the issuance of orders requiring people to physically distance. The inglenook is a small, dead-end space in the terminal near the check-in area for passengers.

While SFO has remained operational despite seeing a drastic decline in airline passengers due to the global pandemic, it pushed off opening the new Milk terminal section for six weeks. Because projects at the airport were deemed essential, construction crews have continued to work on the phased $2.4 billion remodel of Harvey Milk Terminal 1.

Tuesday, April 28, JetBlue will be the first airline to move to its new ticket counter and baggage claim locations in Harvey Milk Terminal 1. Southwest will do so Thursday, April 30, while it remains to be seen when American Airlines will do so.

It is to take up the ticket counter area closest to the Milk exhibit. Airport spokesman Doug Yakel told the Bay Area Reporter that the airline will likely move its check-in operations there in May but an exact date has yet to be determined.

Nonetheless, the inglenook space will be accessible to anyone traveling through the pre-security area of the Milk terminal, the first of three domestic terminals at SFO. Past the security zone remains a gigantic 400-foot wall running the length of the terminal that features nearly 100 images related to Milk's life.

It was unveiled last year and features most of the Milk photos used in the smaller, permanent exhibit. The wall installation is slated to come down sometime in early 2021, while the entire terminal renovation project should be completed in 2023.

San Francisco officials opted to name the domestic terminal in honor of Milk, the first LGBT person elected to public office in the city and state only to be killed 11 months into his first term in November 1978, after a proposal to rename the entire airport on behalf of the gay icon was rejected. It is the first airport facility in the world named after an LGBT leader.

The new nine-gate section opening to travelers this week is in what is known as South Harvey Milk Terminal 1. The facade outside now sports signage denoting it as "Harvey Milk Terminal" in large black letters and as "Terminal 1" in slightly smaller letters below Milk's name.

In early March SFO Museum officials gave the B.A.R. a sneak peek of the Milk inglenook. Its design is reminiscent of a 1970s den or rec room in a private home, as it sports wood paneling, olive green and burnt orange swivel chairs, and a wavy carpet featuring a maroon, green, and red color palette.

"It should be a wonderful amenity for everyone flying through here," said Tim O'Brien, assistant director and curator of exhibitions for the SFO Museum, at the time.