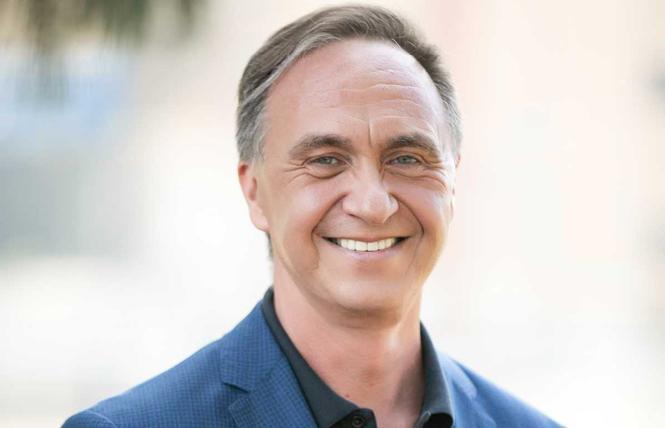 One hundred and thirty-seven LGBT-serving nonprofits co-signed a letter to California Governor Gavin Newsom April 22 urging the state to provide targeted funding to them amid the financial repercussions of the novel coronavirus outbreak.

The letter was spearheaded by Equality California, the statewide LGBTQ rights group. Executive Director Rick Chavez Zbur told the Bay Area Reporter in an April 22 phone call that while all nonprofits are being impacted by the economic crisis — Newsom declared California was in a recession April 17 — LGBT nonprofits are being hit particularly hard.

"Our community faces disproportionate impacts — both from health disparities and from an economic perspective," Zbur said. "More than other areas, we rely on fundraising events and those have been canceled or postponed."

Zbur also noted that LGBT people are overrepresented in the restaurant, retail, and gig economies — at rates approaching double heterosexual and cisgender participation in those industries, according to a study earlier this month released by the Human Rights Campaign.

"Our organizations provide critical social safety net services for LGBTQ+ people, including LGBTQ+ people within communities of color, people living with or affected by HIV, people with disabilities, immigrant communities, people experiencing homelessness and food insecurity, and others disproportionately impacted by the COVID-19 crisis," the letter reads.

"We know you share this goal. Growing up in San Francisco, and later serving as the City and County's mayor, you've witnessed firsthand the devastation of the HIV/AIDS crisis, as well as the long term impacts of discrimination, violence and injustice experienced by our community," it continues.

The letter asks Newsom to use funds approved by the federal coronavirus relief package that became law March 27.

"As the state receives money through the CARES Act, we implore you to provide immediate and targeted funding for LGBTQ+ nonprofit organizations of all kinds. California is a beacon of hope for LGBTQ+ people across the nation, but without emergency assistance for LGBTQ+ nonprofits and allied community partners, all our advancements are in jeopardy," the letter states.

Zbur said that he hopes Newsom is amenable to the nonprofits' request.

"The governor has been focused on the public health crisis — having adequate hospital beds, (protective equipment), minimizing community spread," Zbur said. "As he starts to focus on the economic and financial impact, we have confidence that as a staunch supporter of the community that he'll provide the model leadership for us that he's already provided for the rest of the nation."

Zbur said that the fact that the letter received over 100 co-signers in less than a day highlights the urgency of the crisis that the nonprofits are facing.

"I participated in a number of calls with other (executive directors)," Zbur said. "Everyone is facing significant financial stress. Some already laid off and furloughed employees. Everyone's cutting to the bone."

Zbur told the B.A.R. in an interview April 16 that his own organization had to delay three of its six fundraising dinners to the fall, but all of them may have to occur virtually. This particularly affects EQCA, especially considering that 2020 is a presidential election year.

The B.A.R. reached out to six of the nonprofit co-signers of the letter (four of the six are based in the Bay Area). Three responded to the request for comment.

Imani Rupert-Gordon, the executive director of the National Center for Lesbian Rights, said she was grateful for EQCA's "leadership on this critical issue."

"It is imperative that LGBTQ organizations survive, and that will not happen in the absence of strong state support. This is a make or break moment for our movement," Rupert-Gordon said. "We urgently need progressive states like California to step up and ensure that the LGBTQ civil rights movement is not broken by this crisis."

Okan Sengun, the executive director and co-founder of the LGBT Asylum Project, said that his nonprofit applied for a This text will be the linkpaycheck protection program loan> but did not receive one.

"That funding would have helped us maintain our payroll so we could keep helping LGBTQ asylum seekers," Sengun told the B.A.R. via email April 22. "Therefore, we are kindly asking Governor Newsom to allocate the necessary funds for LGBTQ nonprofits to continue doing such vital work for the LGBTQ community in the midst of this pandemic."

David Heitstuman, a gay man who is the executive director of the Sacramento LGBT Community Center, told the B.A.R. in April 23 Zoom meeting that his organization had to take the step to indefinitely postpone that city's Pride parade — which the center is responsible for putting on.

"EQCA reached out to ask if we wanted to sign on to the letter," Heitstuman said. "We've been working with a group of centers throughout the country to see how we can best serve the vulnerable community members who rely on us for direct services as our sources of revenue disappear due to the pandemic."

Governor Gavin Newsom's office did not immediately respond to a request for comment.

See the B.A.R.'s April 30 edition for more on how LGBT nonprofits in California are being impacted by the coronavirus outbreak.

Updated, 4/23/20: This article was updated with comments from some of the co-signers of the letter.