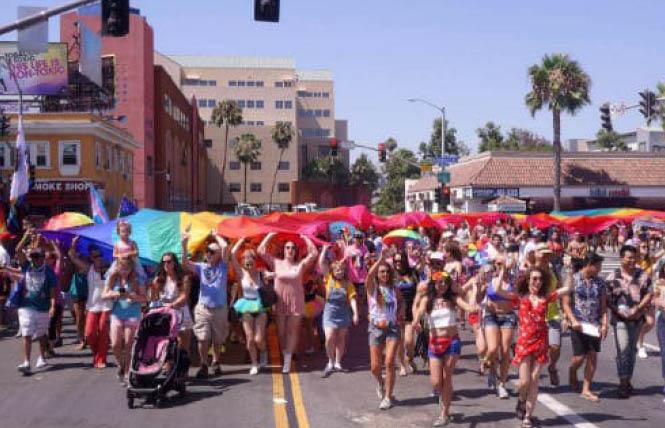 San Diego Pride became the latest such event to cancel its annual parade and other in-person events this year due to the novel coronavirus outbreak. Photo: Courtesy SD Pride

With San Diego and Seattle Prides announcing they too are going virtual this year, nearly every single large 2020 Pride parade on the West Coast has been canceled or postponed due to the novel coronavirus outbreak.

The news Thursday from the two cities at polar ends of the country's Pacific coastline came two days after San Francisco Pride officials announced they were scrapping their 50th milestone parade and celebration set for the last weekend of June. Instead, the organizers of the largest Pride event west of the Mississippi said they would join in the global virtual Pride gathering being planned for Saturday, June 27.

The first Pride to announce its postponement in the Bay Area was Santa Cruz Pride, which had been set for June 7. Soon after that news in early March, Long Beach Pride, scheduled for May 15-17, and L.A. Pride, set for June 12-14, both postponed their events.

None has yet to announce new dates for their celebrations. Sonoma County Pride in late March announced it had scrapped its LGBT parade and festival scheduled for early June due to the coronavirus pandemic.

Sacramento Pride, scheduled for June 13-14, has yet to be canceled but is highly unlikely to go ahead as planned. In a note on its website, the event's organizers say they are "committed to providing our attendees with the celebration that has continuously brought our LGBTQ+ and allied communities together from across Northern California."

But they also state, "As the safety of the community is paramount to our organization, our Pride team will continue to monitor updates in regards to COVID-19. After much consideration we are looking into the possibilities of postponing Sac Pride to a later date this year to insure the safety of our community members."

The Portland Pride Waterfront Festival and Parade that was to take place the same weekend as that of Sacramento's has been postponed. Pride Northwest, which puts on the annual celebration, has yet to announce any new dates.

"Pride Northwest is committed to working with local officials and our partners to identify a later date and what Pride might look like for 2020," wrote Executive Director Debra Porta and board President Manumalo Ala'ilima in a note on the event's website. "In the meantime, we are collaborating with other partners to find ways to keep our community connected, seen, and celebrated. We will also be shifting our short-term focus to ways in which we can support our community in this critical time."

Early Thursday, San Diego Pride's board of directors and staff announced that all of their in-person gatherings scheduled for July would not take place as planned due to the COVID-19 pandemic. In a blunt statement the organization released, it acknowledged "large-scale events such as Pride Parades and Festivals are simply not possible and pose too much of a risk to public health and safety."

Sue Hartman, the San Diego Pride board's co-chair, stated the decision to cancel this year's parade was not easy.

"This pandemic has impacted all of us. We have had to change how we live our lives and Pride is no different," Hartman stated. "This was not an easy decision, but everyone's health and safety are paramount. Rest assured, our community will find ways to celebrate Pride together again."

Her co-chair, Nick Serrano, called on the city's LGBT community not to see the cancellation "as a setback, but a step forward — this is what we must do so that we can come together sooner rather than later. It is in that vein that we encourage everyone to stay home per local and state guidelines, to check in on one another during this time, and remember that we are all in this together."

Shortly after the news from San Diego, the organizers of Trans Pride Seattle, Seattle PrideFest and Seattle Pride issued a joint statement with their city officials to announce they were also shifting all of their annual Pride celebrations to a series of virtual events this year out of an abundance of caution and concern for their local LGBT community's health and well-being. (Washington state was an early hot spot for COVID-19, the illness caused by the coronavirus.)

"Although we want to march with you more than anything in the world, we will have the opportunity to connect and make our voices heard during a series of virtual events this June (to be announced early next month)," wrote Sarah Abshire, the board secretary of the Gender Justice League, which organizers the city's Trans Pride March.

The group is now surveying local residents on what sorts of virtual events they would like to see held this year in order to celebrate Pride.

"Don't worry though! We're also working together with Seattle PrideFest and Seattle Pride to celebrate in-person later in the summer, when it may be safer to resume community festivals," wrote Abshire. "We'll be sure to share these details with you as soon as they are available."

Look for virtual events
Like other Prides in major West Coast cities, San Diego's and Seattle's annual LGBT celebrations bring hundreds of thousands of people together. Similar to their counterparts in Seattle, the San Diego Pride board intends to mark Pride virtually, the details of which it plans to roll out in the coming weeks.

"Pride is not canceled. In-person mass gatherings are canceled. Nothing can strip away our pride," noted San Diego Pride Executive Director Fernando Z. López. "Nothing can deny us the pride our community has built inside ourselves, our community, or the broader world. We will still find ways to raise our Pride flags, celebrate the vibrancy of our community, and bring to light the issues that our movement still faces."

San Diego Pride, as a founding member of InterPride, will also be supporting and taking part in Global Pride, the 24-hour international, virtual event happening on the last Saturday of June.

"For hundreds of thousands of San Diegans and visitors that long anticipate this annual celebration, I have no doubt there will be some heartache and disappointment, but I fully stand by San Diego Pride's decision to put the health and safety of our community first," stated lesbian Senate President pro Tempore Toni G. Atkins (D-San Diego). "It is in our collective best interest. While we won't be able to march and celebrate in person, I hope we can find creative ways to continue to uplift the LGBTQ community especially during these unprecedented times."

With California Governor Gavin Newsom recently expressing doubt that any large public gatherings will be able to take place this summer, it is unclear if either of those events will go ahead as planned. Nor is it clear what this year's Trans and Dyke marches in San Francisco will look like.

Organizers of the Trans March, held the Friday evening of Pride weekend, are discussing what their plans will look like but have decided that the 2020 event will be a virtual one.

"Due to the novel coronavirus SARS-CoV2, which causes the disease COVID-19, Trans March 2020 will not be a physical gathering. The leadership met and has decided to make some kind of virtual event," states a note on the event's website.

Nicky "Tita Aida" Calma, one of the organizers, told the Bay Area Reporter this week, "I would be more than happy to speak with you perhaps next week once a few ideas has been talked about."