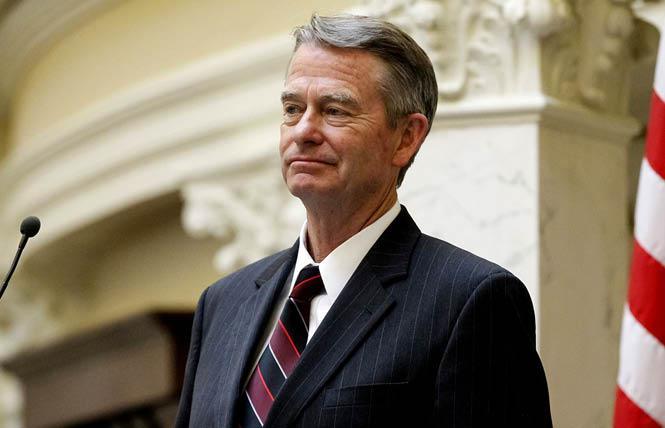 San Francisco will ban taxpayer-funded travel to Idaho and city contracting with businesses based in the state starting in July.

The Gem State will become the 12th state on the city's banned list because of Governor Brad Little signing into law March 30 two bills that restrict the rights of transgender Idaho citizens. Idaho House Bill 500 requires transgender students to participate in athletics based on their gender assigned at birth, and Idaho House Bill 509 bars updates to birth certificates issued to transgender people.

Clair Farley, a trans woman who is the director of the San Francisco Office of Transgender Initiatives, informed the Bay Area Reporter Wednesday (April 15) that the Idaho ban on contracts and travel will take effect July 1 when the pair of anti-trans laws go into effect. A memo notifying departments and city staff that Idaho has been added to the covered list will be sent out after the shelter-in-place order ends.

"It is unconscionable that Governor Brad Little sided with discrimination and signed two anti-trans bills into law, in the middle of a pandemic, a national emergency, and on the eve of Transgender Day of Visibility on March 31," Farley told the B.A.R. "Transgender and gender-nonconforming (TGNC) people have always existed. TGNC people have participated in sports consistent with their gender identities for years without ever harming any other students."

The order, issued in response to the novel coronavirus outbreak, is currently set to expire May 3. But it is likely to be extended or lifted in stages depending on how well the city and Bay Area region is doing at stemming the spread of the virus.

"The city of San Francisco has added Idaho to our Covered State list because will we will continue to hold states accountable when they pass legislation that legalizes discrimination," stated Farley.

The state of California is also expected to ban state travel to Idaho that is paid for with taxpayer funds unless it is for emergency purposes. Like the city, the Golden State bars using public funds for most travel to states that have enacted anti-LGBT laws since 2015.

California Attorney General Xavier Becerra oversees the state's "no-fly list," which mirrors the one kept by San Francisco as it includes the same 11 states to date. Becerra's office has yet to respond to the B.A.R.'s question on when it plans to include Idaho.

In February, Texas Attorney General Ken Paxton sued California in federal court over its list. Iowa was the last state to be added, while the others on the list are South Carolina, Oklahoma, Texas, Alabama, Kentucky, South Dakota, Mississippi, North Carolina, Tennessee, and Kansas.

Idaho sued over sports law
Also on April 15, the American Civil Liberties Union filed a lawsuit in U.S. District Court for the District of Idaho against Little and other Idaho state officials over the law requiring women and girls who are transgender and many women and girls who are intersex to participate in school sports based on the gender they were assigned at birth. According to the ACLU, Idaho is the first state to impose an outright ban on participation of transgender athletes and the only with a statewide law regulating transgender and intersex athletes in the country.

"We're suing because HB 500 illegally targets women and girls who are transgender and intersex and subjects all female athletes to the possibility of invasive genital and genetic screenings," stated Gabriel Arkles, senior staff attorney with the ACLU's LGBT & HIV Project. "In Idaho and around the country, transgender people of all ages have been participating in sports consistent with their gender identity for years. Inclusive teams support all athletes and encourage participation — this should be the standard for all school sports."

The ACLU filed on behalf of a track athlete at Boise State University who is transgender and a junior at Boise High School who is cisgender and concerned about being subjected to invasive "sex verification" testing under the new law. Joining in the federal lawsuit are the ACLU of Idaho, Legal Voice, and Cooley LLP.

"I just want to run with other girls on the team," stated Lindsay Hecox, who relocated to Idaho with an eye toward joining the track and cross-country teams at BSU. "I run for myself, but part of what I enjoy about the sport is building the relationships with a team. I'm a girl, and the right team for me is the girls' team."

The unnamed plaintiff, referred to as Jane Doe in the lawsuit, Hecox v. Little, is a 17-year-old cisgender girl and athlete finishing her junior year at Boise High School who plans to try out for the soccer team in August.

Idaho already has one of the most restrictive policies in the country regulating participation of transgender athletes in high school athletics, noted the ACLU. The restrictive policy, which will be replaced by HB 500 when it takes effect this summer, required girls who are transgender to complete one year of hormone therapy as part of gender transition before competing in girls' sports. The NCAA and elite international competition have a similar rule.

"Alongside Idahoans throughout the state, we have been fighting this hateful, unconstitutional legislation since it was introduced," said ACLU of Idaho legal director Ritchie Eppink. "Businesses, major employers, schools, doctors, and counselors have all warned that this law is terrible for Idaho."

Farley told the B.A.R. that San Francisco is "grateful for the work of the ACLU who filed a lawsuit today against Idaho to fight these two shameful bills."