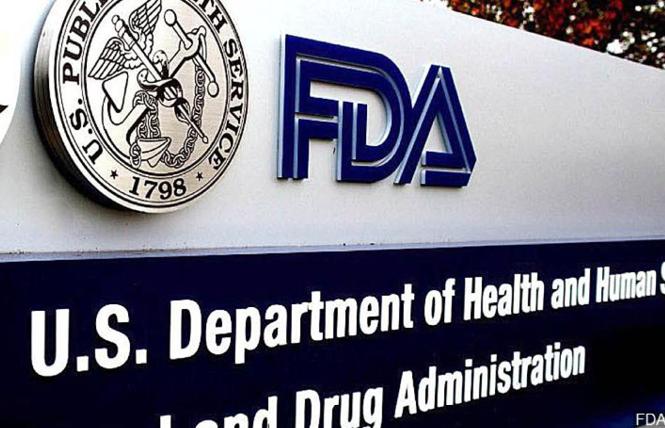 The U.S. Food and Drug Administration announced major changes April 2 to its ban on blood donations from men who've had sex with men amid major challenges to the nation's blood supply in the wake of the novel coronavirus shelter-in-place orders.

The deferral period for people who have had tattoos and piercings has also been reduced from 12 months to three.

The move brought mixed reactions from LGBT leaders, who have stepped up their yearslong advocacy for the ban to be lifted entirely now that there is a need for donated blood. There had been a lifetime ban for gay and bisexual men from 1983 until the Obama-era change to a one-year deferment in 2015.

Gay state Senator Scott Wiener (D-San Francisco), who as the Bay Area Reporter previously reported penned a letter to the FDA and started a petition March 23 calling for the ban to be entirely revoked, stated that it is hypocritical to ban gay and bi men and their partners for a single sexual contact while allowing promiscuous heterosexuals to donate blood.

"The celibacy requirement continues to ignore the fact that modern HIV testing technology is so accurate and powerful that it will detect any HIV infection that occurred 10-14 days or longer before the donation," he added. "If HIV testing has a window of a mere 10-14 days, why on earth would the FDA insist on a three-month celibacy period for gay and bisexual men to be able to donate?"

Wiener is holding a #giveforagay blood drive with the American Red Cross Tuesday, April 7, from 10 a.m. to 4 p.m. at the Zellerbach Rehearsal Hall, 300 Franklin Street, which is asking heterosexuals to give blood on behalf of someone they know who cannot. San Francisco Mayor London Breed has offered to give on his behalf, according to Wiener's office. Wiener said that 50 people donated blood.

Gay District 8 Supervisor Rafael Mandelman, who as the B.A.R. previously reported introduced a Board of Supervisors resolution March 31 calling for the federal government to rescind the ban, stated that the FDA's changes are "weak tea." The board unanimously passed the resolution April 7.

"They still apply an unscientific, unnecessary, and demeaning standard for sexually active gay and bisexual men that they do not apply to sexually active straight people," Mandelman wrote to the B.A.R. the afternoon of April 2.

But LGBT rights group GLAAD hailed Thursday's changes as a victory for gay and bisexual rights.

"LGBTQ Americans can hold their heads up today and know that our voices will always triumph over discrimination," GLAAD President and CEO Sarah Kate Ellis stated in an April 2 news release. "This is a victory for all of us who raised our collective voices against the discriminatory ban on gay and bisexual men donating blood. The FDA's decision to lower the deferral period on men who have sex with men from 12 months to three months is a step toward being more in line with science, but remains imperfect.

"We will keep fighting until the deferral period is lifted and gay and bi men, and all LGBTQ people, are treated equal to others," she added.

In a news release, the FDA said it was revising its guidance because of the data.

"Based on recently completed studies and epidemiologic data, the FDA has concluded that current policies regarding certain donor eligibility criteria can be modified without compromising the safety of the blood supply," Dr. Peter Marks, director of the FDA's Center for Biologics Evaluation and Research, stated April 2.

The justification for the initial ban had been that in 1983, there was not yet a way to detect antibodies to HIV, the virus that causes AIDS, in blood. But antibody tests to detect HIV infection in the bloodstream have now existed for decades.

HRC representatives stated that any blood donation deferment should be based on individual participation in the types of behavior that are likely to transmit HIV, not characteristics of individual identity, per se.

"The Human Rights Campaign is advocating to remove any ban based on identity," Alphonso David, a gay man who is president of HRC, said during the news conference. "Instead, the FDA should look into particular risk factors to determine who donates blood."

Scott Schoettes, the HIV Project Director at Lambda Legal Defense and Education Fund, was more specific about what he thinks changes going forward should be based on.

Schoettes said that while HIV antibody tests are very effective, it is a common misconception that they are 100% accurate at detecting the presence of the virus in the bloodstream. Antibodies to HIV are produced by the body between six weeks and three months from the time of infection, according to the World Health Organization.

"There is a reason there are deferral periods," Schoettes said. "There is a window period where testing will not cover a newly acquired infection."

Schoettes said that Lambda Legal has been working for decades — "from the very beginning" — to have the ban changed.

David Stacy, HRC's government affairs director, said that removing gay and bisexual identity from blood deferments has been a major policy initiative of the organization since Barack Obama's ascension to the presidency in 2009. Indeed, the only major change heretofore (from a lifetime ban to a one-year deferment) took place under his administration.

Stacy said HRC's work has been behind the scenes, contrasting it with — and complementing — more public entities such as U.S. senators and representatives, and San Francisco queer politicians such as Wiener and Mandelman.

"We've been in touch with the FDA," Stacy said. "Public pressure often gets perceived as political pressure, so we've been more doing quiet advocacy."

Lee's office did not respond to a B.A.R. request for comment at press time.

Baldwin said that the changes are a first step.

"We want our politicians in a public health crisis to be informed by the best science," Baldwin said. "Similarly, we want that to be true of our blood supply in the United States. It shouldn't have taken a pandemic and the resulting blood shortage to bring about progress on this issue.

"We know that blanket deferrals are not based in science and the best medical expertise on this topic, so we've got to go forward," Baldwin added.

Log Cabin Republicans, a group advocating for LGBT representation within the GOP, praised the decision in an April 2 news release. The organization stated it had lobbied behind the scenes for the change after President Donald Trump said he was identifying "red tape" to cut that was hampering federal response to the coronavirus outbreak.

"Because of our solid relationships in the White House and the Department of Health & Human Services, Log Cabin Republicans immediately requested a review of this particularly onerous restriction on blood donations, especially in this great time of need," a news release from the organization stated.

Log Cabin Republicans stated that major gay organizations and news outlets were not discussing or reporting on the FDA's rule changes, though this is not borne out by the facts.

According to the AABB (formerly the American Association of Blood Banks), hundreds of thousands of blood donations that would have occurred if not for the coronavirus epidemic will not. Over 10,000 blood drives have been canceled nationwide.

Although blood donations and drives are allowed under shelter-in-place orders, the fact that people will not be leaving their homes means attendance is expected to reduce to a trickle. One single blood donation can save up to three lives, according to the American Red Cross.

Updated, 4/8/20:This article was updated to include Supervisor Mandelman's resolution passed the Board of Supervisors.