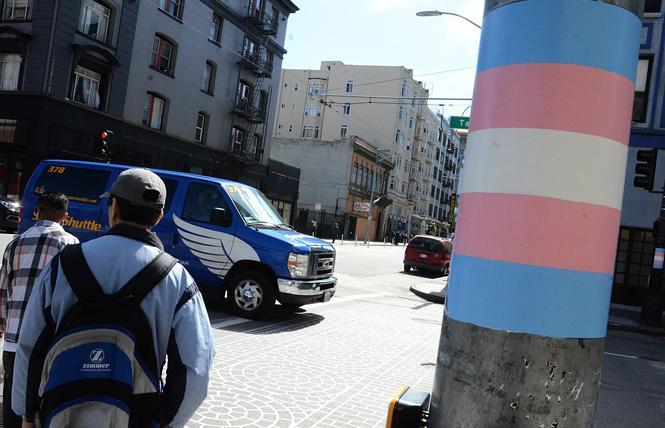 The Compton's Transgender Cultural District has officially changed its name to The Transgender District. Many streetlight polls in the district are painted in the colors of the trans flag. Photo: Rick Gerharter

The Compton's Transgender Cultural District will from now on be known simply as The Transgender District to avoid unintentionally honoring the transphobic cafeteria owner whose name was lent to the first documented trans uprising in American history.

"When we started our fight for the cultural preservation of the Compton's Cafeteria riot, it was fine, but as we grew in visibility talking with media across the world what came up oftentimes in our interviews was the story of Gene Compton and as we kept telling the story, we realized he was a huge reason behind having drag queens, queer, and trans folks arrested," Aria Sa'id, a trans woman who is the executive director of the district, told the Bay Area Reporter in a March 20 phone call. "They were often the ones facilitating calling the police."

Gene Compton ran a chain of all-night cafeterias in the Bay Area in the mid-20th century. The Compton's Cafeteria at the intersection of Turk and Taylor streets became a hangout for transgender people, particularly trans women and sex workers, much to the chagrin of staff.

In August 1966 — the exact date has been lost to history — Compton's management called the police on patrons. When police tried to arrest one of the customers, the trans woman threw a cup of coffee at the officer, sparking the Compton's Cafeteria riot — three years before the more famous Stonewall riots in New York City marked a major turning point in the fight for LGBT rights in the United States.

"The community didn't want it to be Gene Compton," Sa'id said. "They wanted it to be Compton's Cafeteria Riot, but the city did not want to have the word 'riot' in a street sign. We will work on having it changed."

The name change to The Transgender District was officially announced March 18 on its Facebook page.

"Like many trans folks, we've decided to change our name towards a more affirming name," the post reads. "To continue honoring him and his restaurant — we are inadvertently tying him to history and prestige that he and his restaurant did not and do not preserve."

Sa'id said that the name-change had been in the works for some time.

Sa'id said that the announcement of the name change was supposed to have occurred in late May at an event celebrating the district, but Facebook changed the name of the district's page after officials had put in a request with the company — leading the district to announce it early.

The area has street signs stating Compton's name in the title of the district. Sa'id said that the district is not trying to change those at the present time.

"We do want the street signs to remain," Sa'id said. "With COVID (the disease caused by the novel coronavirus) and everything going on in the world, we're not going to reach out yet but we will take it to the community and see what they want it to be."

Sa'id said it's a common misconception that The Transgender District is part of the city government.

When asked to comment on the name-change March 20, District 6 Supervisor Matt Haney, who represents the area covered by The Transgender District, said, "I would defer entirely to the leadership of the cultural district and the trans people who live in the district on the name."

District launch party
The Transgender District is planning a launch party for May 30 at 8 p.m. Sa'id said that many of the district's events have been canceled due to the novel coronavirus outbreak that has left California under a shelter in place order until further notice.

The launch party had been in the works for several years, according to Sa'id.

"We were originally going to do an outdoor party, but there's a lot of construction in our area of the Tenderloin," Sa'id said. "So because of that, there's sewage and pipeline replacement on the street, so we decided to find an event space we wanted it to be in."

That event space is the former Hibernia Bank building at 1 Jones Street, which is now an event space known as Hibernia.

"We thought it would be a good way for the community to have access to that space and have a launch party there. It's a huge part of history," Sa'id said.

COVID-19 relief fund
The district also launched a relief fund for transgender people in the Tenderloin who have been impacted financially in recent weeks by the coronavirus outbreak.

The district has already given $150 grants to 25 people, Sa'id said. That was the initial goal of the relief fund, but she said it will hopefully be expanded as district leaders find resources and room in their budget.

"These small, mini grants are intended to help trans folks get groceries and necessities," Sa'id said. "Obviously we wish we could do more.

"It's important to the district to still be of help to the community even with the cancellation of so many of our upcoming projects," she added.