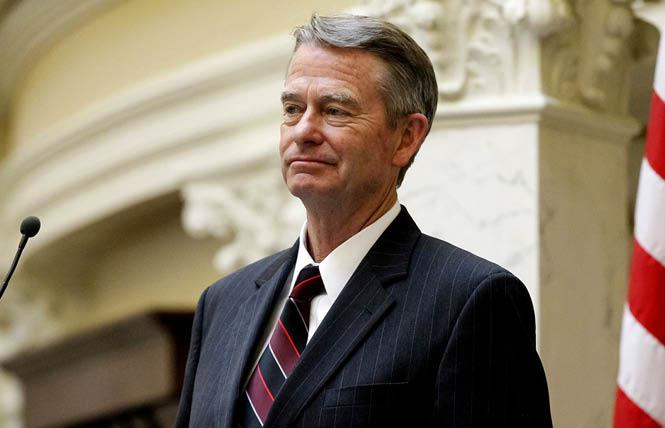 LGBT rights activists said they expected the governor would act on the bills by Monday, March 23, at the latest.

House Bill 509 blocks the state from altering birth certificates to conform with the gender identity of transgender individuals. A federal judge struck down similar Idaho legislation two years ago. HB 500 not only would deny scholastic athletes from playing in the sports programs associated with their gender identity rather than their assigned gender at birth, but would subject even cisgender athletes to sex verification tests if their gender is challenged.

"We are not trying to do anything except save women's sports for girls and women," Idaho state Senator Mary Souza (R), said during the legislative debate, according to the Idaho Press.

Combined, the two bills would "effectively enshrine discrimination and bias into state law," Alphonso David, president of the Human Rights Commission, said in a conference call with reporters Thursday, March 19. "We're calling on Governor Brad Little to veto these bills. These bills are offensive on their face, but particularly troubling given where we are globally, where we're all trying to bring people to battle a pandemic. This week, Idaho became the first state this year to pass legislation targeting transgender people."

If enacted, David said, the bills "would give Idaho the dubious distinction of leading the way in anti-transgender legislation. If these bills were to become law in Idaho, they would send a strong and offensive message to transgender people that they are less than their peers and not deserving of community and acceptance."

HB 500 is part of a current national wave of bills aimed at eliminating transgender participation in sports, especially girls and women's sports.

"They are using transgender kids as pawns," David said. "We are living in abnormal times with this pandemic. While we are all adjusting to this new reality, the Idaho Legislature decided to focus on something else: ensuring that transgender youth are not allowed to participate in sports."

Transgender athlete and advocate Chris Mosier said he played girls and women's sports before transitioning when was 29 years old. He now competes on the national and international levels in men's track.

"As an athlete, I've experienced firsthand the different way that men and women are treated in sports," Mosier, now 40, said during the call. "I've actually experienced it on both sides. I grew up playing girls and women's sports. My entire youth sports experience was as a female athlete. I cannot imagine being a young person and being questioned, as I was as a young person, about my gender. As a good athlete, a strong athlete, I was often accused of not being who I said I was.

"One of the things opposing players and fans would throw at me were questions about my gender," he added. "In a situation like that, where I was questioned whether I was a boy or a girl because I had a strong jump shot — I couldn't imagine that triggering an investigation, having a pelvic examination just to play sports as a 15-year-old with the rest of my teammates. We are already in a position where fewer and fewer young people are playing sports. HB 500 will only drive girls out of sports."

Mosier said, "In the midst of a global crisis, the message that's coming from Idaho is that it is a priority to attack transgender people."

Dr. Scott Leibowitz, representing the American Academy of Child and Adolescent Psychiatry on the call, said, "HB 500 not only infringes upon the privacy and rights of transgender youths participating in sports, but actually disrespects all youth athletes in the state. The bill ignores many aspects of athleticism that all competitors will tell you are important to be judged by. These include preparation, training, specific skill sets for particular sports, psychological determination, steadfastness, and team collaboration, among many others."

HB 500, he added, "is a blatant anti-science bill. It ignores the very real notion that gender identity itself has a biological basis."