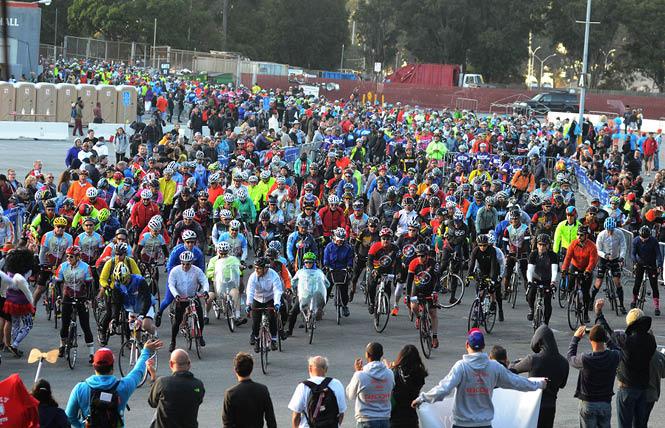 Some of the 2,000-plus participants in the 2017 AIDS LifeCycle ride to Los Angeles leave from Cow Palace in San Francisco. Photo: Rick Gerharter

For the first time since it was established in 1994 the annual AIDS/LifeCycle 545-mile bike fundraiser along the California coast has been canceled.

The joint organizers of the event, the Los Angeles LGBT Center and the San Francisco AIDS Foundation, made the decision Tuesday, March 17, in light of the novel coronavirus outbreak. The ride had been set to leave San Francisco from the Cow Palace Sunday, May 31, and arrive in Los Angeles Saturday, June 6, which in some past years coincided with that city's Pride weekend.

But this year's L.A. Pride festivities were set to take place in West Hollywood the weekend after, June 12-14, and had already been postponed to a later date that has yet to be announced due to the pandemic. The AIDS/LifeCycle is set to return in 2021 at dates still to be determined.

Its cancellation this year is a major blow financially to the two nonprofits, which are major providers of HIV prevention and other health services in their respective cities. In 2019 participants of the bike ride raised a record-breaking $16.7 million that was split between the L.A. center and San Francisco AIDS Foundation.

The cancellation of this year's ride was made in a video released to riders and roadies Tuesday.

"We have not made this decision lightly, and we have made it in consultation with members of the AIDS/LifeCycle community," stated Los Angeles LGBT Center CEO Lorri L. Jean. "This will be the first time, since we began riding in 1994, that we have had to cancel the ride, so we are navigating unchartered waters. But, Joe [Hollendoner, CEO of San Francisco AIDS Foundation] and I have the utmost faith that we will get through this because of all of you: our beloved Riders and Roadies."

The ride debuted in 1994 as the California AIDS Ride before it was reconfigured in 2002 to what is known today as AIDS/LifeCycle following reports in the Bay Area Reporter and other publications about the questionable practices of the previous organizer of the fundraiser Pallotta TeamWorks. Prior to 2019's total, participants had raised more than $263 million and completed more than 60,000 journeys from San Francisco to Los Angeles.

Hollendoner stated that despite the decision to cancel this year's ride, the center and the foundation will continue to perform the life-saving HIV prevention and care work that the LGBTQ community needs.

"In fact, it's anything but 'business as usual' at San Francisco AIDS Foundation and the Los Angeles LGBT Center. Not only are we providing the services we typically do, we are also using the expertise both of our agencies have developed — responding to the AIDS epidemic — to do everything we can to make sure that our communities aren't devastated by coronavirus," he stated.

The two nonprofits are encouraging AIDS/LifeCycle participants to continue fundraising and join AIDS/LifeCycle 2021. San Francisco resident Marty Courson, who was planning to participate in the ride for the first time this year and had been riding practice routes for months, told the B.A.R. he wasn't surprised by the cancellation.

"I was disappointed as I was going on the training rides. But I know it had to have happened," said Courson, who lives with his husband in the city's Castro district. "It was impossible for them to execute this ride leaving May 31 considering what is going on."

He was close to raising the $3,000 required of ride participants and was getting set to ramp up his fundraising efforts in the coming weeks to hit his goal of $5,000. If the ride is held next year, Courson plans to participate.

"I will absolutely do it," he said.

For more information about AIDS/LifeCycle, or to watch the joint statement issued by the center and foundation, visit