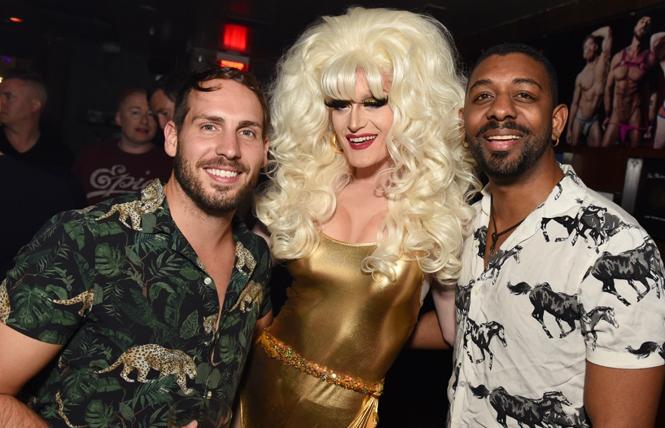 Drag artists and others enjoyed BoyBar March 6 at the Midnight Sun. Photo by Steven Underhill

The fund seeks to blunt the economic impact of the novel coronavirus outbreak on LGBT nightlife workers in the Bay Area, which was effectively shut down by Governor Gavin Newsom's March 15 directive that bars, nightclubs, wineries, and breweries should close in response to the outbreak.

Those eligible to receive a grant from the fund include bartenders and servers at nightlife establishments; entertainers such as DJs, dancers, and drag artists; vendors or contractors primarily serving the nightlife industry; producers and organizers of nightlife events; and production artists, lighting designers, and event photographers.

"To ensure that the fund provides sufficient relief to affected individuals, we are limiting the initial application cohort (due March 31) to 200 awards," the fund's website states. "Only lifeline expenses will be considered for a grant."

Lifeline expenses are defined to include rent, gas and electric payments, basic telephone and internet service, food, and medical and insurance payments.

It was not immediately clear how much money is currently in the fund. People can donate at the above link.

A total of $10,000 had been raised as of Tuesday at noon, according to Race Bannon, a leather columnist for the Bay Area Reporter and longtime community leader, who helped put together the fund.

Bannon said that the fund is necessary to ensure the survival of LGBT nightlife in San Francisco and the wider Bay Area.

"Queer nightlife is a renowned and integral aspect of San Francisco Bay Area culture," Bannon stated. "The people who produce and staff local queer nightlife have been financially devastated by the venue closures resulting from the coronavirus crisis. The Bay Area is known worldwide as a center for amazing queer nightlife. Let's keep that nightlife alive by lending a helping hand to those who need our help in these trying times."

Bannon said that Phil Hammack, also known as Pup Turbo, had the initial idea to put together a fund. It all came together in a few days because of the urgency.

"(Hammack) emailed a few of us. The few of us gathered on a quick web conference meeting. We got the ball rolling," Bannon wrote in an email to the B.A.R. March 17. "Then we met a few more times each day until it was launched officially this morning."

Juanita MORE!, a drag artist who serves with Bannon on the steering committee of the fund, has strongly urged people to "stay the fuck home" as much as possible during the shelter in place order that was issued Monday for San Francisco and five other Bay Area counties.

"We need to band together as a community to help support our friends who work in nightlife, now more than ever," MORE! stated. "With COVID-19 just starting to affect our city, the newly instated quarantine is going to rapidly change the lives of those who help make the magic happen, night after night."

Also coming out in favor of the effort is Cleve Jones, a longtime community activist who was one of the founders of the AIDS Memorial Quilt in the 1980s.

"All of us who still have jobs can support those who don't," Jones stated.

"We must all support our friends and neighbors as we face this new challenge to our community and our nation. We've been to this rodeo before and we know what to do," he added, referring to the early days of the AIDS epidemic when the LGBTQ community rallied to help its own.

Those wishing to give a gift of more than $2,000 are asked to contact the organizers directly.

The Center for LGBTQ Economic Advancement & Research is helping to collect, manage, and distribute the donations. It became involved through Hammack, Bannon said. It has not responded to a B.A.R. request for comment as of press time.

Updated, 3/17/20: This story has been updated to include more information about the fund.

Tax status leads to scrutiny of leather nonprofit
Sign up!