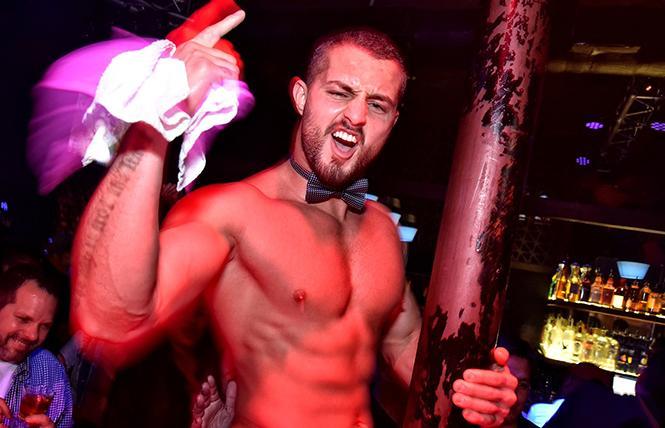 Several bars in the Castro, like Beaux, have temporarily closed due to restrictions on public gatherings of more than 100 people in light of the coronavirus. Photo: Gooch

A number of San Francisco's LGBT nightlife venues have temporarily closed after Mayor London Breed's order the afternoon of March 13 shutting down non-essential social gatherings of over 100 people.

For the first time since 1966, The Stud announced Saturday, March 14, it was shutting its doors in response to the edicts city officials have issued in an attempt to curtail the spread of the novel coronavirus.

"The city of San Francisco has decided that during the pandemic it's better for clubs of our size to remain closed for the next 7 weeks. For now, they're telling us that we can reopen on May 1st," the South of Market LGBT venue wrote in a Facebook post early Saturday evening. "City Hall has always supported us, and we support them in this decision. Stopping the spread of the virus and protecting the vulnerable members of our families and community has got to be the first priority for everyone."

Around 5 p.m. Friday afternoon, Beaux at 2344 Market Street and Midnight Sun at 4067 18th Street closed, with signs on the doors of both establishments stating they will remain closed until May 1.

The order came after the health officer for the City and County of San Francisco issued a moratorium on "non-essential events of 100 or more persons" at 3:44 p.m.

The Castro bar The Cafe was also closed Friday night. In a note on its Facebook page it said it would be closed through at least Sunday, March 15.

Castro bars Lookout and The Mix remain open but have staff counting capacity.

"In response today's Public Health Order issued by Mayor Breed effective immediately Lookout will reducing our capacity to 67 people," The Lookout announced on its Facebook page. "This is in addition to other precautions we were already taking to keep our staff and our customers safe."

Toad Hall, Badlands and Hi-Tops are also still open, but in a note it posted to its Facebook page Saturday afternoon Toad Hall said it was restricting the number of people it would be letting into the bar.

"Note: due to coronavirus precautions our occupancy has been reduced until further notice," read the post, which was similar to one posted on the Facebook page of Badlands, as both bars are owned by Les Natali. Badlands, more of a dance club, also announced it would not be charging its normal cover charge to get in.

Beaux did not respond to a request for comment at press time.

As the Bay Area Reporter has been chronicling on its website, myriad LGBT nonprofits and event promoters have been canceling and postponing events due to the pandemic. The Circuit Sundays event featuring DJ Hannah from Miami, scheduled for Sunday, March 15, at 5 p.m. at the Cafe, was postponed, for instance, by event promoter Gus Bean.

"In the face of the current coronavirus pandemic, Gus Presents has elected to postpone our Sunday, March 15, party at the Cafe," Bean wrote on his Facebook page. "The health and safety of our valued patrons is top priority, thus we are taking a short break until the virus and the fear surrounding it are under control, #SafetyDance!"

Bean said that ticket holders will receive funds and a new date will be announced soon.

Disco Daddy's sixth annual Sylvester Tribute, which was originally scheduled to take place at the South of Market leather bar The Eagle Sunday, March 15, at 7 p.m. has been postponed. In a statement on its Facebook event page, DJ Bus Station John said it was out of an abundance of caution.

"Be assured we are the last ones to buy into media-induced mass hysteria (how basic & boring!) or the bubble of denial (also b&b). That said, we've decided to take a little break from throwing our larger parties & step back for a spell to see how things play out over the next several weeks," the statement reads. "This is a challenging time for all of us, but we plan to stay as optimistic as a 59-year-old furball dj can be — & hope you will too."

The annual tribute to Sylvester has a cover of $7 and will tentatively take place in the same location at the same time but on May 17.