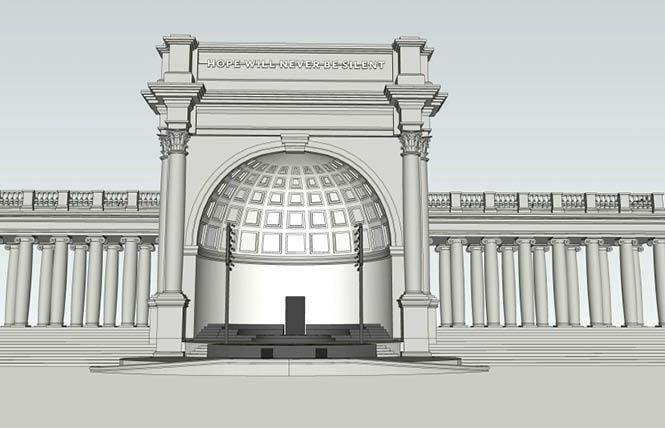 After it rejected an artwork inspired by the late gay icon Harvey Milk proposed to be installed for two years in San Francisco's Golden Gate Park, the city's historic preservation commission had been expected to reconsider its decision at its March 18 meeting.

But the proponents of the installation are now seeking a continuance as they refine their plans, meaning the soonest a decision could come would be April 1, as the oversight body only meets twice a month. The arts nonprofit Illuminate is seeking permission to install a temporary light piece of the words "Hope will never be silent" atop the facade of the 75 foot tall Music Concourse Bandshell in the park at the western edge of the Music Concourse.

The quote is widely attributed to Milk, though it is unclear when he first said it. If installed it would be the first tribute to an LGBT individual in Golden Gate Park outside of the National AIDS Memorial Grove.

"Given the times we live in, hope is needed now more than ever," Ben Davis, Illuminate's founder and chief visionary officer, told the Bay Area Reporter Friday, March 13.

The day prior Davis said he was at the historic bandshell structure, also known as the Spreckles Temple of Music, inspecting its surface to determine how to install the LED light installation spanning 40 feet in length with as minimal impact as possible.

"I was in a lift truck Thursday measuring that space in great detail and looking at every mortar joint," said Davis.

It sits above the underground parking garage that serves visitors to the California Academy of Sciences, the de Young Museum, and Japanese Tea Garden. (The two museums are currently closed through the end of March due to the novel coronavirus pandemic, while the tea garden remains open for now.) It was built in 1900, survived the 1906 earthquake, has been renovated over the years, and is the official home to the Golden Gate Park Band, which performs on Sunday's in the park during the summer months.

Although he was unsure as to when his organization would be able to pitch its revised plans for the artwork to the historic preservation commission, Davis expressed hope its members would support continuing the item to a later meeting when they meet next Wednesday.
(UPDATED: The panel canceled its March 18 meeting due to the coronavirus and is now expected to meet April 1.)

"Hopefully, they find the good grace to do that," said Davis, whose organization installed a similar lighted art piece with the same quote on the mantel of the commercial building overlooking the plaza that bears Milk's name above the Castro Muni station as part of the ceremonies commemorating the 40th anniversary of Milk's historic November 1977 election as the first out gay supervisor in San Francisco and the first openly LGBT elected official in California.

Illuminate proposed erecting the second lighted quote art piece as part of its project to mark Golden Gate Park's 150th anniversary this spring. It is enhancing the bandshell's risers in order to open up the structure's stage and make it more usable for dance performances, upgrading its lighting, and installing a state-of-the-art sound system.

The $800,000 project is being paid for by private funds and was approved last month by a host of city oversight panels. Work on the bandshell stage began in early March and should wrap by April, even though the city postponed the public celebration to mark the park's sesquicentennial to sometime later this year due to the novel coronavirus pandemic.

At its February 19 meeting the historic preservation commission voted 5-0 to approve everything proposed for the bandshell except the tribute to Milk. Commissioner Jonathan Pearlman, a gay man and local architect, said he found the lighted art piece to be "really inappropriate" and "very jarring." Commissioner Richard Johns, a local attorney and historian, complained, "it adds a certain tackiness that is not best added."

After the recreation and park commission approved the quote and the rest of Illuminate's proposal when it met the following day, it asked city staff to return to the historic preservation commission in order to address the concerns it had raised.

As of now staff for the oversight body is recommending it disapprove the lighted quote art piece, according to a report released Thursday, March 12, ahead of the March 18 meeting. It is doing so because "the project has not substantively changed since originally reviewed by the Commission on February 18, 2020."

The most recent plans submitted by Illuminate, dated February 20, had called for installing the 24 letters in the quote pin-mounted to a 37 foot by 8 inch aluminum raceway secured through 15 quarter-inch diameter anchor bolts through the mortar joints of the bandshell's Colusa sandstone exterior.

Each letter would be 20 inches tall and 3 inches thick, internally illuminated, and feature a white acrylic front with aluminum framing, noted the staff report. It would be connected to a power source through a single half-inch penetration through a mortar joint, according to the report.

Illuminate has pledged to restore and patch all mortar joints when it removes the lighted art piece in 2022, should it be approved. Davis told the B.A.R. he is confident the nonprofit group can find a way to address the commission's concerns in order to win approval for the artwork.

"The reality is I believe more than ever that Milk's quote is an important addition to this structure and coming at the right time," he said. "However, as the April 4 150th anniversary celebration has been indefinitely postponed, we are taking this as an opportunity to listen carefully to the commissions' concerns. We are also improving our own design and installation process."