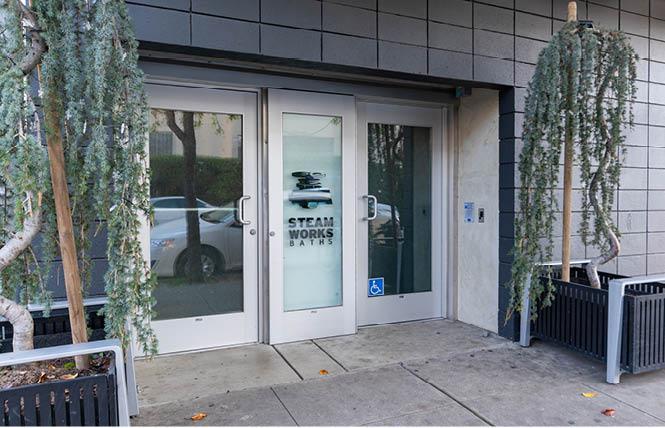 A Thursday hearing to discuss a policy change to allow bathhouses like Steamworks in Berkeley in San Francisco has been canceled due to the coronavirus outbreak. Photo: Jane Philomen Cleland

The first hearing on allowing gay bathhouses to reopen in San Francisco has been postponed in light of the coronavirus outbreak.

After initially issuing an order banning events with 50 people or more in city-owned buildings, San Francisco Mayor London Breed issued another order Wednesday placing a moratorium on all large gatherings of 1,000 people or more. That is in effect until March 25 and can be renewed.

In light of coronavirus developments, Board of Supervisors President Norman Yee over the weekend asked his colleagues to postpone their legislative proposals likely to draw a large contingent of the public to speak on the matter at City Hall hearings.

Thus, gay District 8 Supervisor Rafael Mandelman made the decision to postpone the planned hearing for Thursday, March 12, on his ordinance aimed at updating the city's policies regarding private rooms in adult sex venues. It was to be taken up by the supervisors' public safety and neighborhood services committee, which he chairs.

As the committee meets every other week, the soonest the proposal could be heard is Thursday, March 26, though Mandelman's office told the Bay Area Reporter it would work in concert with the city's Department of Public Health on rescheduling the hearing. Depending on if the coronavirus outbreak is under control or not, the hearing could be pushed back until April 9 or later.

"It is a very dynamic situation and the top priority for the Department of Public Health has to be responding to the coronavirus," said Mandelman.

As the B.A.R. first reported in February, Mandelman's ordinance would jettison the long-standing prohibition against having locked doors for private rooms rented by bathhouse patrons and rescind the requirement that such venues hire people to monitor the sexual activities of their customers.

This week Mandelman told the B.A.R. he saw no reason not to continue to push for a change in the bathhouse policies in light of the coronavirus outbreak. Health officials are asking the public to limit social interactions in large settings and those with underlying health conditions to self-quarantine by working from home and curtailing travel.

"I think it is kind of different issues," Mandelman said. "This period of social distancing is not going to be forever."

Bay Area bathhouses
So far the Bay Area's two gay bathhouses, the Watergarden in San Jose and Steamworks in Berkeley, remain open and have not shut down due to the coronavirus. Both are operating on their usual 24-hours a day, seven days a week schedule.

Curtis Jensen, Steamworks' marketing and graphics coordinator, wrote in an emailed response to the B.A.R. Tuesday that the company has taken various actions at its clubs to protect both members and employees. It also has locations in Seattle, Chicago, Toronto, and Vancouver.

"We have increased our cleaning protocols to include more frequent wiping and disinfecting of touch points such as door handles, handrails, and sinks and restroom stall doors. We will be maintaining our intensive regular cleaning routines," Steamworks said in a statement. "We are using disinfectant in our cleaning routines which has been shown to be effective against human coronaviruses. We will ask members displaying common cold symptoms to please refrain from checking in during this time and look forward to welcoming them back when they are feeling better."

John Gamber, the Watergarden's general manager, told the B.A.R. Wednesday afternoon that they have no plans to alter their hours as of now but are daily monitoring the news about the coronavirus outbreak.

"Boy things are changing day by day and we are trying to keep up with it," said Gamber.

The business has instituted similar rules and procedures as that of Steamworks, such as routinely cleaning surfaces, providing hand sanitizer, and making sure people wash their hands and shower after using its facilities. It is following the model it used in addressing the HIV epidemic, said Gamber, to help educate its customers on how to protect against the coronavirus.

"We are also working right now to develop a new list of procedures for our staff to deal with and answer the questions our customers have," he said. "In-house our prevention director, who normally deals with HIV outreach, we are utilizing him to hopefully answer questions, and as best as we can get information about this out to our customers."

SF bathhouse rules
San Francisco's bathhouse restrictions were instituted in 1984 during the height of the AIDS epidemic in response to a lawsuit the city had filed and resulted in the businesses shutting their doors. That October a San Francisco Superior Court judge issued a temporary restraining order that shuttered nine gay bathhouses and sex clubs.

The legal case came to an end in 1989 when the city dismissed its lawsuit. By then the city's gay bathhouses were no more, but over the ensuing years sex clubs opened their doors. Several, like Eros and Blow Buddies, remain in business, albeit without private rooms patrons can lock shut.

By the 1990s the city's health officials saw the sex clubs as avenues to reach gay men and educate them about safe sex practices. But they had remained resolute in their opposition to allowing gay bathhouses to open with private rooms.

The standards could still include prohibiting patrons of the businesses from engaging in sexual activities deemed "as posing an unreasonable risk of infection" for HIV and other sexually transmitted diseases, according to a draft of the legislation shared with the B.A.R. The standards likely would continue to require the businesses to provide free condoms, lubricant and other safe sex supplies to their customers, as well as information about the transmission of HIV and other STDs.

Mandelman's legislation also states the adult sex venue operating rules could include "such other requirements and/or prohibitions as the director determines are necessary to protect and promote the health and safety of patrons."

Initially, Mandelman had included language instructing DPH officials to revise the city's bathhouse rules by June 1. But in light of the health department's focus on dealing with the coronavirus outbreak, that deadline had been pushed back to July 1.

And it likely will be pushed back again, as Mandelman's legislative aide, Tom Temprano, told the B.A.R. this week that they would work with DPH officials on determining "a reasonable deadline" once it was clear when the ordinance would be passed by the supervisors.

Public reaction to the proposal has been "overwhelmingly positive," noted Mandelman, who expects it will be adopted.

"The top priority for everybody in city government right now has to be trying to avoid what happened in China and Italy and South Korea," said Mandelman, referring to the severe travel restrictions all three countries put in place to try to contain the spread of the coronavirus. "With regard to this latest delay in the hearing, people have been waiting for decades to see the bathhouse policies changed, so having to wait another month is unfortunate but probably necessary."

Updated, 3/11/20: This article has been updated to include new information on the city's response to coronavirus and comments from The Watergarden in San Jose.