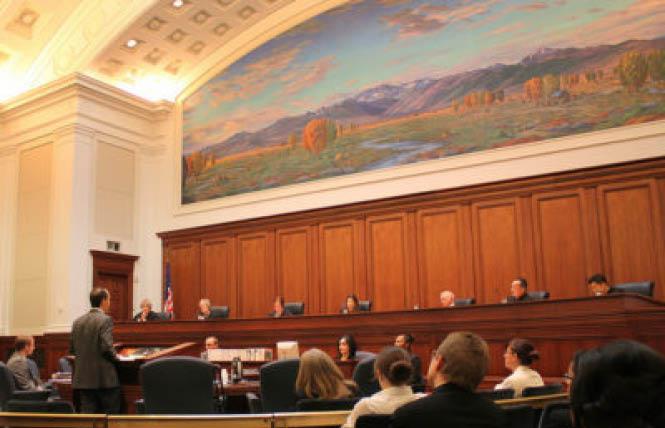 Two gay state lawmakers have urged Governor Gavin Newsom to appoint an LGBT person to the state Supreme Court, which will see a vacancy this summer with the retirement of Associate Justice Ming W. Chin. Photo: Courtesy Legal Planet

The number of out judges on California state courts remained flat at an official count of 62 between 2019 and 2018. It marked the first time the ranks of LGBT people serving on the bench had not increased year-to-year since 2014.

That year, the number of LGBT judges had remained the same as the 41 listed in the demographic report for 2013. The Judicial Council of California first began reporting on the LGBT makeup of the Golden State's judges in 2012 due to a change in state law and found there were at least 37 out jurists serving in 2011.

In the nine-county Bay Area, the superior courts in Marin, Napa, and Solano counties continue to have no LGBT judges on the bench per the judicial demographic report. The annual reports are published at the start of March each year and cover the previous year. Thus, the report released Monday, March 2, covers the makeup of the bench as of December 31, 2019.

The annual demographic information is often inaccurate and does not include every known LGBT jurist, as the forms are not always filled out by the judges or they will not answer all of the demographic categories they're asked about. For instance, despite the fact that it is well known that appellate Justice Luis A. Lavin is gay and has served on the state's 2nd District Court of Appeal since being appointed in 2015, he once again is not counted in the 2019 report.

It means for the last two years there were at least 63 known LGBT judges on the state bench. Part of the reason for the numbers remaining flat is that Governor Gavin Newsom has nominated few people to court vacancies since taking office last year.

He has named 15 people to Superior Court seats, though none were LGBT according to the judicial appointment data the governor's office released in its own report March 2. It revealed there were 40 LGBT applicants for judicial vacancies in 2019, or 8.7% of the total pool of 461 applicants.

Judge Joseph Quinn, a gay man who serves on the San Francisco Superior Court, told the Bay Area Reporter that since Newsom hasn't made many judicial appointments yet, it's too early to draw any firm conclusions on what his record will be during his first term in terms of appointing LGBT people to the state bench. He noted the judicial appointment process is a lengthy one and often takes more than a year.

"But I'm optimistic. The governor's early appointments are diverse and everything I know about him gives me confidence that he will increase the LGBTQ community's representation on the bench," wrote Quinn in an emailed reply.

The Commission on Judicial Nominees Evaluation 2019 Statewide Demographics Report released March 1 revealed it had reviewed 62 candidates' qualifications for judicial office, and three of those were known to be from the LGBT community. One transgender female applicant last year was deemed not qualified, a gay male candidate was deemed exceptionally well qualified, and another gay male applicant was deemed qualified by the review panel.

Last June, Newsom named Quinn a member of the regional Judicial Selection Advisory Committee that advises him on judicial candidates for nomination and appointment to vacant court seats. Quinn stressed that he was not speaking as a member of the panel or on its behalf.

For him, personally, Quinn told the B.A.R. that he "finds it encouraging that close to 10% of early applicants for bench appointments are from the LGBTQ community. That seems significant and it tells me that LGBTQ candidates feel positive about this governor."

A potential historic judicial pick
Newsom now has the opportunity to name the first LGBT person to the California Supreme Court due to the pending retirement of Associate Justice Ming W. Chin. He announced in January he would step down August 31 after the end of the court's current term. According to the annual judicial demographic reports, all seven members of the state's highest court identify as straight.

In February, gay lawmakers state Senator Scott Wiener (D-San Francisco) and Assemblyman Todd Gloria (D-San Diego), the chair and vice chair, respectively, of the California Legislative LGBTQ caucus, sent Newsom a letter urging him to nominate an LGBTQ judge to succeed Chin. They asked him "to seize the historic opportunity" he had been given to nominate the first openly LGBTQ-identified justice to the California Supreme Court.

"Nominating an LGBTQ justice would send a powerful message of California's leadership and values, and it would highlight the success California has achieved in making the state's judiciary better reflect its rich diversity," they wrote in their letter. "The time has come for an openly LGBTQ justice to sit on our state's highest court."

In a statement, Wiener noted, "California has never had an LGBTQ Supreme Court justice, and it's time to make history. The LGBTQ community depends on the judicial system to enforce our civil rights and to ensure we aren't criminalized. Representation matters, and I urge the governor to do what he has always done: stand up for LGBTQ people."

According to the latest judicial demographic report, there were 1,732 members of the state bench as of December 31, 2019, a slight decrease from the 1,743 members on the bench in 2018. And 426 judges — or 24.6% of the total serving last year — did not provide their sexual orientation or gender identity information.

The number of known out appellate court justices remains flat at four, split between two gay men and two lesbians. The report identifies one lesbian on the 4th District, and a lesbian and a gay man on the 1st District. (The report does not identify the names of the individuals as the demographic data is reported anonymously.)

There continues to be 59 LGBT trial court judges in the state, according to the 2020 report, with 24 lesbians, 32 gay men, and two bisexuals. The state's lone out transgender jurist is Alameda County Superior Court Judge Victoria Kolakowski, who is married to B.A.R. news editor Cynthia Laird.

The Los Angeles Superior Court continues to have the most LGBT judges, with 20, according to the report. Five are lesbians and the rest are gay men, and they account for 4.1% of their 484-person bench.

The superior courts in Alameda, San Diego and San Francisco counties each have six out judges, while there are four — one lesbian, two gay, and one bisexual — serving on the San Bernardino Superior Court. The only superior court with three out judges was the Santa Clara Superior Court, with two lesbians and one gay man.

The superior courts in Contra Costa, Orange, Riverside, and San Mateo counties each have two out jurists, while those in El Dorado, Fresno, Imperial, Sacramento, San Joaquin, and Sonoma each had one.

UPDATED 3/3/20 with data from Newsom's judicial appointment report for 2019 and comments from Judge Joseph Quinn.