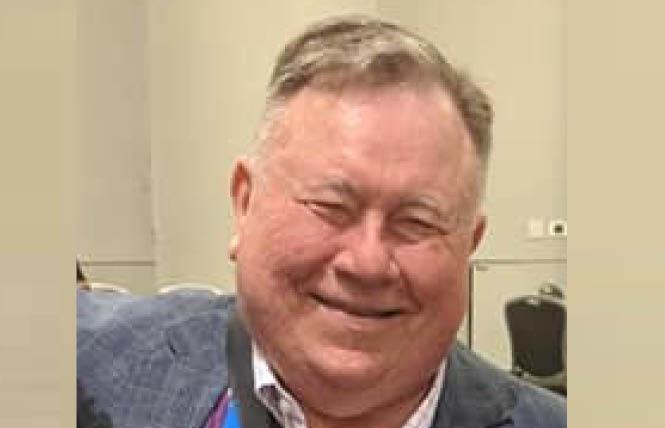 Psychiatrist Robert P. Cabaj, a gay Bay Area man known for his role in advancing LGBT mental health through writing, teaching, and advocacy, died suddenly February 24 after a brief hospitalization. He was 72.

The author of many publications on LGBT mental health and the editor of one of the early and influential textbooks in the field, Dr. Cabaj was a longtime leader in LGBT medical groups, serving as president of the AGLP: The Association of LGBTQ+ Psychiatrists, as well as GLMA, formerly the Gay and Lesbian Medical Association. In addition to his support for LGBT patients and physicians, he strongly advocated for public psychiatry programs.

In a note to members, Roy Harker, executive director of AGLP, wrote, "Beyond his accomplishments, Bob is well known for his affable personality, abundant respect for his peers, and warm relationships with all of those he encountered. He will be sorely missed."

Dr. Cabaj worked in the public sector for most of his career, for the last 14 years as medical director of San Mateo County Behavioral Health and Recovery Services. He was also an associate clinical professor at UCSF and had a small private practice. He was a supervisor at the San Mateo Psychiatric Residency Training program, one of the pioneer community-based training programs in the nation, where he taught and mentored psychiatric trainees.

Dr. Cabaj moved to San Francisco in 1991 from Boston, where he graduated from Harvard Medical School in 1974 and completed his residency at the Cambridge Hospital program. For eight years, Dr. Cabaj was director of behavioral health in San Francisco.

A board certified psychiatrist and a certified addiction medicine specialist, Dr. Cabaj's areas of expertise included substance abuse, gay and lesbian mental health, and HIV/AIDS. He co-authored and edited the most comprehensive book on LGBT psychiatry, "Textbook of Homosexuality and Mental Health," as well as "On the Road to Same-Sex Marriage."

At the time of his death, he was co-chair of the public psychiatry committee of the California Psychiatric Society.

Dr. Dan Karasic, a friend for 30 years, said Dr. Cabaj was instrumental in removing ego-dystonic homosexuality as an illness in the DSM-III-R, the standard diagnostic manual.

He "was a role model for modernizing the view of LGBTQ people within psychiatry," and "remained dedicated to moving forward LGBTQ health ... and will be greatly missed." Karasic, a clinical professor of psychiatry at UCSF, wrote in an email.

Colleague and friend Dr. Howard Rubin, also a psychiatrist, wrote in an email, "Bob has always been a great mentor and friend and his death is a great loss to the LGBTQ community and to psychiatry. When I first moved to San Francisco, he helped me launch my career here, as I rented space from him in his private practice office. Bob always had time for me with a kind and friendly word delivered with the wisdom and humor that reflected his kindness and deep experience."

Dr. Cabaj is survived by his husband, Bennie Ferma. Plans for a memorial service have not been announced.