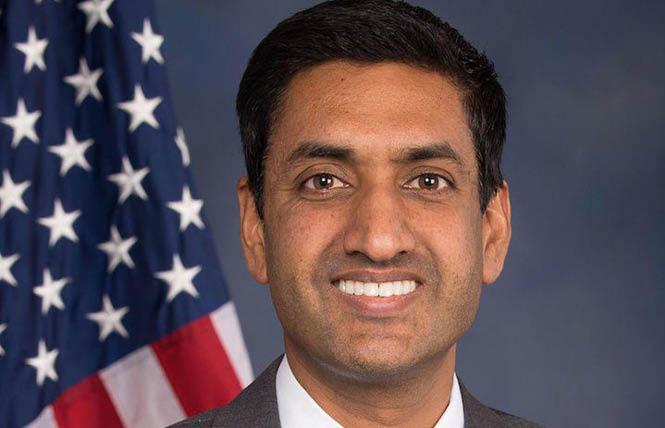 Congressman Ro Khanna has introduced a bill that would allow for a nonbinary option on U.S. passports.

Congressman Ro Khanna introduced legislation in the U.S. House of Representatives February 25 that would allow people to mark an "X" on their passport applications in lieu of male or female.

In a phone interview with the Bay Area Reporter February 26, Khanna (D-Fremont) noted that at least 10 countries, including Germany, Canada, and India, allow passports that have options beyond male and female.

Khanna said he got the idea for the legislation — designated HR 5962 — from Gerri Cannon, a trans member of the New Hampshire Legislature, while he was on the campaign trail for Democratic presidential aspirant Senator Bernie Sanders (I-Vermont). Khanna is a national co-chair for Sanders' presidential campaign.

"I met her on the campaign trail for Bernie and she had a bill like this that she got done in conservative New Hampshire, which she got passed, for driver's licenses" Khanna said. "So I reached out to some national and local LGBTQ groups and they helped us craft it."

Low said in a phone interview with the B.A.R. February 27 that he is in consistent communication with Khanna.

"We meet regularly, as our districts overlap," Low said. "Ro has been a champion and ally of the LGBTQ community and indicated to me 'what can we do to have as inclusive a federal government as possible? How do we amplify the best practices of California at a federal level?'"

"Rep. Khanna's groundbreaking legislation would help ensure nonbinary people can travel abroad with the dignity and respect we all deserve," Ploumpis wrote. "As one of the first states to add a nonbinary gender marker to driver's licenses, California is proud to lead the way on progressive legislation for the non-binary and LGBTQ+ community. We enthusiastically support Rep. Khanna's legislation to finally recognize our nonbinary family, friends, and loved ones."

Sasha Buchert, a trans woman who is a senior attorney with Lambda Legal Defense and Education Fund, looked at an early draft of the bill.

"I provided input," Buchert said. "We wanted to make sure that the drafters were in touch with folks who help nonbinary folks — the whole community."

Buchert helped work on the state-issued IDs legislation in California while she worked with the Transgender Law Center.

"I'm really happy he is championing this and bringing it to the forefront," Buchert said.

Clair Farley, the director of the San Francisco Office of Transgender Initiatives, said that the legislation is a breakthrough.

"Nonbinary and intersex people deserve to have their genders respected, and that includes the ability to identify themselves authentically on all government documents," Farley wrote in an email to the B.A.R. February 27. "We are proud California was one of the first states to lead this charge on assuring birth certificates and government ID's include more expensive gender options that truly reflect the diversity of our communities.

"This new legislation would be an important win as trans rights continue to be under constant attack," Farley added.

Khanna said that the chances of the bill passing the House are pretty good. It already has 25 co-sponsors, he said, including House Foreign Affairs Committee chairman Eliot Engel (D-New York).

Khanna said that while there are not as yet any Republican supporters, "we're going to try."

On the Senate side, Khanna said that while he "doesn't know" if it can pass in the GOP-controlled body, he hopes the bill will serve as a blueprint for efforts when Democrats regain control of the government.

"We want to make this priority for our next Democratic president," Khanna said. "They can run with it and pass it."

Khanna also hopes that HR 5962 can show the United States Department of State that there is enough support for a gender-neutral option that it will change the current requirements on its own.

"I hope the State Department voluntarily considers this, and they haven't dismissed the idea," Khanna said. "I'm going to reach out and see if they, themselves decide to do this."

Khanna said that he hopes this legislation builds on the contributions that California and Californians have made to LGBT rights.

"California has become the leader on LGBTQ+ equality," Khanna said. "Some people dread travelling because they don't have their real identity on their passport. Some people are frustrated because of the bureaucracy of changing it."