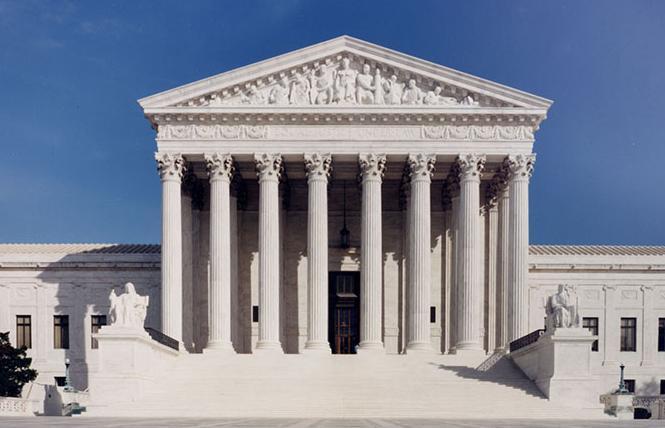 The U.S. Supreme Court has agreed to hear a case that could impact same-sex couples' ability to become foster parents.

There was troubling news for LGBT legal activists coming from the U.S. Supreme Court Monday: The high court announced it will review a lower court decision that held a Catholic foster care agency could not discriminate against same-sex couples.

The conflict is a long-standing one and has implications beyond church-run organizations and foster care. It could have impact on conflicts involving business vendors who have religious objections to serving same-sex couples.

"Depending on how broadly the court rules," said Shannon Minter, legal director of the National Center for Lesbian Rights, "its holding possibly could apply even to the enforcement of anti-discrimination laws to commercial businesses. The court would have to rule very broadly for that to happen, which it ordinarily tries to avoid. That said, we are in uncharted territory with this court, which has already shown a penchant to disregard its own precedent and norms."

"The Supreme Court has the opportunity to affirm the basic principle that when agencies accept government money to provide services to children involved in the public foster care system, their religious beliefs are not a license to discriminate," said Lambda Legal senior counsel Karen Loewy.

But the Supreme Court could have done that by simply not accepting the case, Fulton v. Philadelphia, which was in a preliminary phase of review.

The 3rd U.S. Circuit Court of Appeals decision denied Catholic Social Services a preliminary injunction that would have allowed it to continue discriminating against same-sex couples.

The 3rd Circuit decision said, "religious or conscientious objections do not supersede the basic obligation to comply with generally applicable civil rights laws provided those laws are applied neutrally." And, in this case, said the court, "The city has acted only to enforce its non-discrimination policy in the face of what it considers a clear violation."

The case before the court began when the city government of Philadelphia became aware that two of the 30 foster care agencies it works with were refusing to consider same-sex couples as foster parents. Because city and state law prohibit discrimination based on sexual orientation, the city said it could no longer work with the two agencies.

One of the two agencies worked out an agreement with the city, but the other, Catholic Social Services, refused, saying it would violate its religious beliefs to comply with the non-discrimination law.

The city replied that, while it had "respect [for CSS's] sincere religious beliefs," CSS had "chosen voluntarily to partner with us in providing government-funded, secular social services." Equality and non-discrimination, said the city, were "both a legal requirement, and an important city policy and value that must be embodied in our contractual relationships."

CSS and other agencies that have objected to treating same-sex couples in accordance with non-discrimination laws have portrayed the conflict as one in which a city is trying to "force" the agency "act and speak in a manner inconsistent with its sincere religious beliefs about marriage."

Lambda Legal's Loewy said the case "could have implications for people who want to discriminate in the name of religion," but she said this case is "about a taxpayer funded agency performing public services on behalf of the government for children in the public child welfare system."

"It raises establishment clause concerns that are not usually implicated by a private individual or business who would be subject to state or federal non-discrimination mandates," said Loewy.

But Minter said the Supreme Court could issue a broad ruling that could overrule or weaken its 1990 ruling in Oregon v. Smith, a landmark ruling that upheld the right of the state to deny unemployment compensation to two people who lost their jobs because they used an hallucinogenic drug. The two people, both Native Americans, said they used the drug as part of their tribal religious practices. The Supreme Court upheld the state's right to deny the compensation.

"That ruling," said Minter, "held that there is no religious liberty exception to neutral laws of general applicability, even when they may have a negative impact on people who hold certain religious beliefs."

And in recent years, the Supreme Court has issued rulings that have chipped away at the Oregon v. Smith decision. Most notably, in 2014, it ruled, in Hobby Lobby v. Burwell, that a closely held family company could deny certain health coverage mandated by the federal Affordable Care Act by saying the owners have religious objections to providing the coverage.

The American Civil Liberties Union issued a statement Monday night, saying a ruling in favor of CSS could have "profound implications" for the more than 400,000 children in foster care around the country.

"If contractors providing government foster care services can reject families that do not meet their religious litmus test, children will lose out on countless families they desperately need," said the ACLU. "In addition to LGBTQ people, this could impact people of a different faith than the agency or who do not attend church."