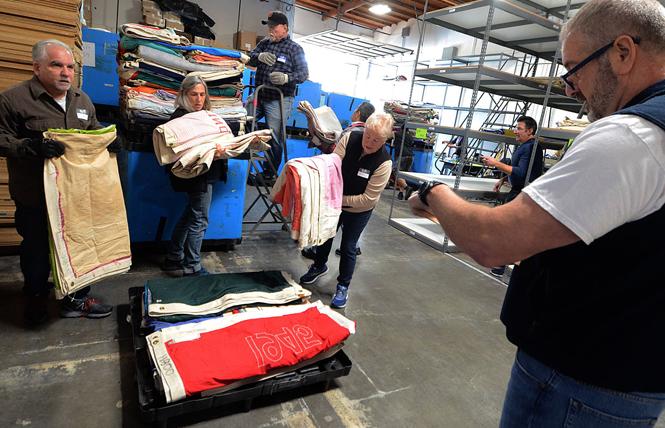 As part of the activities for Golden Gate Park's 150th anniversary, portions of the AIDS Memorial Quilt will be displayed in San Francisco for three days in April.

The quilt display will consist of 1,920 panels, approximately the same size and shape of the first major quilt display in Washington, D.C. in 1987. The quilt was last displayed in full in 1996 on the National Mall in D.C.

The San Francisco Recreation and Parks Department, organizers of the park's sesquicentennial, and representatives of the National AIDS Memorial Grove, which now has stewardship of the quilt, made the announcement late Monday.

A news conference will be held Tuesday morning at a warehouse in San Leandro, where blocks of the quilt began arriving last week. (See more below.)

Portions of the quilt will be on public display from Friday, April 3 through Sunday, April 5. Golden Gate Park's 150th anniversary community day is set for April 4. Thousands of people are expected over the weekend, organizers said.

The Golden Gate Park display will take place in Robin Williams Meadow, along Bowling Green Drive, and in the AIDS grove.

According to a news release from Rec and Park and the grove, the quilt panels on display will be comprised of those that have been added to the quilt's nearly 50,000 panels in recent years, reflecting the story of HIV/AIDS during the past decade, particularly in communities of color.

"The face of HIV and AIDS has changed drastically since the pandemic devastated communities across the United States and San Francisco nearly 40 years ago," AIDS grove Executive Director John Cunningham stated. "This display, the largest ever of the quilt in San Francisco's history, will be a reminder of what we all have lost, how far we have come, and where we need to go in the future to remember, heal, and educate future generations about the devastating impact of this disease."

During an exclusive media sneak peak of the quilt blocks arriving in the East Bay last week, Cunningham told the Bay Area Reporter that the April display will be the largest since the first one, which took place during the second National March on Washington for Lesbian and Gay Rights in 1987.

In February 2012, 35 12 x 12 blocks, or completed quilts, were on display inside an empty storefront at 2278 Market Street near the heart of the city's Castro neighborhood. As the
B.A.R. noted, it was the first time since 1999 that such a large collection of quilt panels had gone on public view at one time in San Francisco. 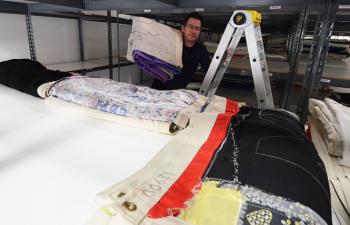 Roddy Williams stacks an AIDS quilt block on shelving in a San Leandro warehouse Friday, February 14, as the first of three semitruckloads of pannels arrived from Atlanta.

AIDS quilt begins to arrive in East Bay
Many of the quilt blocks are now in the Bay Area. In a nondescript warehouse near Oakland International Airport, volunteers gathered on Valentine's Day to begin the solemn — yet joyful — task of unloading blocks of the AIDS Memorial Quilt.

Representatives from the AIDS grove were on hand at the San Leandro warehouse, as well as Roddy Williams and Kevin "Chili" Crane, two gay men from the Names Project that the grove flew from Atlanta to help unpack and organize the remembrances of thousands of people lost to HIV/AIDS.

Funding for the quilt's move, renovating the San Leandro warehouse, and helping wind down the Names Project came from a $2.4 million donation from Gilead Sciences Inc., Cunningham said.

The Names Project Foundation used to be located in San Francisco. Its history dates back to 1985 when Jones had participants in that year's annual candlelight march honoring the deaths of gay San Francisco Supervisor Harvey Milk and Mayor George Moscone write down the names of people lost to AIDS onto placards that were then attached to the federal building near City Hall.

Last week, the first blocks arrived, via truck from Lathrop in San Joaquin County, after a rail ride from Georgia, said Gina Gatta, a gay woman and former grove board chair who was driving the forklift moving boxes from the truck to the warehouse. Each block — there are 5,976 according to quilt co-founder Smith — contains eight individual panels, most with one name each. Around 100,000 people are memorialized, as some of the panels contain multiple names, Smith explained.

McMullin, a straight ally and one of the co-founders of the quilt, along with longtime gay activists Smith and Jones, marveled at the sight.

"I knew it'd come back eventually," McMullin told the B.A.R. Friday. McMullin too has "come back," as she relocated to the Bay Area, where she will help with repairing quilt blocks.

Back at the warehouse, Cunningham said two more trucks will soon arrive.