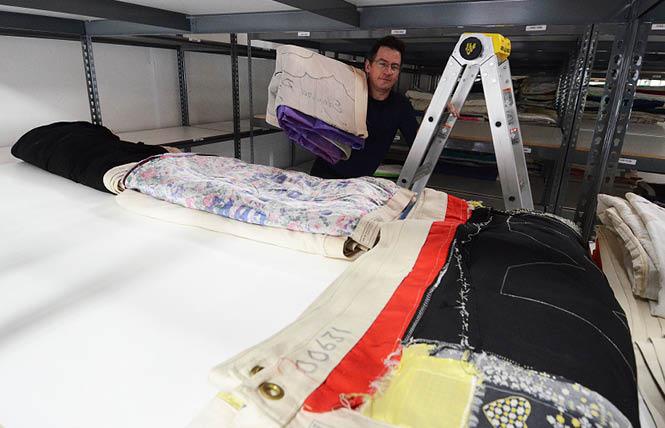 In a nondescript warehouse near Oakland International Airport, volunteers gathered on Valentine's Day to begin the solemn — yet joyful — task of unloading blocks of the AIDS Memorial Quilt.

Representative from the National AIDS Memorial Grove were on hand at the San Leandro warehouse, as well as Roddy Williams and Kevin "Chili" Crane, two gay men from the Names Project that the grove flew from Atlanta to help unpack and organize the remembrances of thousands of people lost to HIV/AIDS.

This week, the first blocks arrived, via truck from Lathrop in San Joaquin County, after a rail ride from Georgia, said Gina Gatta, a gay woman and former grove board chair who was driving the forklift moving boxes from the truck to the warehouse. Each block — there are 5,976 according to quilt co-founder Mike Smith — contains eight individual panels, most with one name each. Around 100,000 people are memorialized, as some of the panels contain multiple names, Smith explained.

Gert McMullin, a straight ally and one of the co-founders of the quilt, along with longtime gay activists Smith and Jones, marveled at the sight.

"I knew it'd come back eventually," McMullin told the Bay Area Reporter during an exclusive media sneak peak Friday. McMullin, too has "come back," as she relocated to the Bay Area, where she will help with repairing quilt blocks.

Back at the warehouse, Cunningham said two more trucks will arrive next week.

The Bay Area Reporter will have more on this story next week.

Guest Opinion: From one pandemic to another
Sign up!