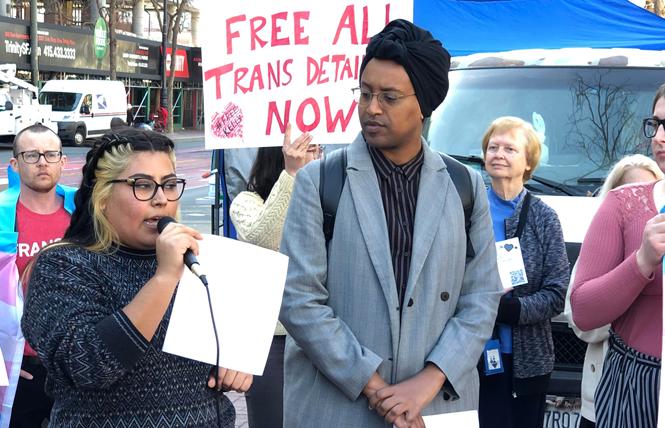 In response to questions from the Bay Area Reporter, Senator Dianne Feinstein's (D-California) office pledged February 19 to reach out to the attorney of the longest-detained trans woman in Immigration and Customs Enforcement custody.

Kelly Gonzalez Aguilar, 23, has been in ICE custody for two and a half years and is currently in Aurora, Colorado.

"Senator Feinstein's staff is reaching out to see if they can help," spokesman Tom Mentzer wrote in an email to the B.A.R. Wednesday.

The news came a week after about three-dozen people gathered at United Nations Plaza in downtown San Francisco February 12 for a news conference where activists asked that Gonzalez Aguilar be freed from ICE custody.

Congresswoman Barbara Lee (D-Oakland) has already inquired with ICE, and Senator Kamala Harris (D-California) is working on the issue, but at the time the group had received no similar commitment from Feinstein, according to Jessica Lehman, who, with her partner, Lee Staub, said she is willing to be Gonzalez Aguilar's sponsor.

Staub compared Gonzalez Aguilar's story to that of his grandmother. Staub's family was forced to flee the Soviet Union for Poland, where they were subsequently imprisoned by German troops during World War II. After Hitler's defeat, they immigrated to the U.S.