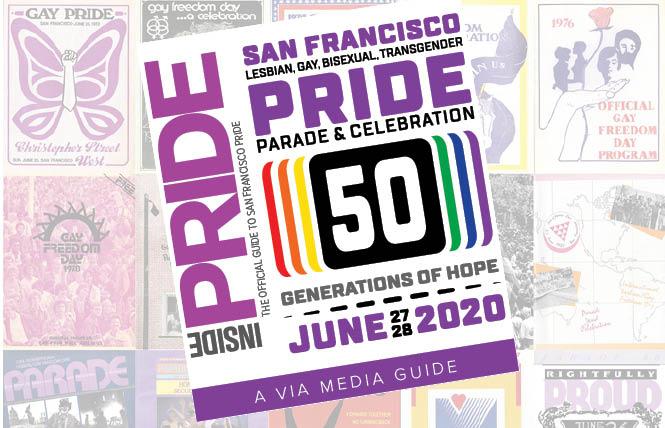 The Bay Area Reporter has partnered with Inside Pride publisher VIA MEDIA since 2016 to bring this marketing opportunity to you.

Distributed throughout San Francisco, the greater Bay Area, and beyond, 'Inside Pride' is the official guide and a comprehensive resource for people attending the San Francisco LGBT Pride Parade and Celebration. 50,000 copies of 'Inside Pride' are distributed in cafés, bars, restaurants, bookstores, community centers, and other major LGBT and LGBT-friendly venues in June, as well as being inserted into the June 4 issue of the Bay Area Reporter.

A world leader in the Pride movement, SF Pride is also a grant-giving organization, having awarded well over $3 million since 1997 from proceeds of the Celebration and Parade to local non-profit organizations.

With over 200 parade contingents and exhibitors, and more than twenty community-run stages and venues, the San Francisco Pride Celebration and Parade is the largest gathering of the LGBT community and allies in the nation.

The 2020 theme is Generations of Hope as SF Pride celebrates their 50th Anniversary.

To reserve space, call Scott Wazlowski at 415 829 8937 or email advertising@ebar.com