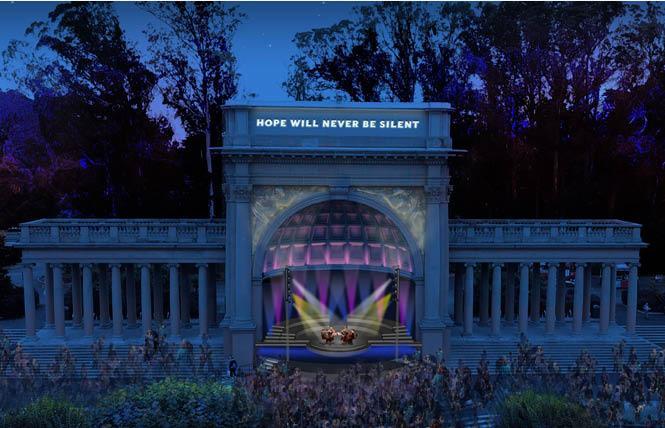 A project that would see the first tribute to an LGBT individual installed in San Francisco's Golden Gate Park outside of the National AIDS Memorial Grove advanced Thursday past its first public review.

As part of the city's plans to celebrate the green space's 150th anniversary this spring, a temporary light installation of the words "Hope will never be silent" would be installed along the top center of the Music Concourse Bandshell in a typeface inspired by historical inscriptions found on the nearby water fountains. The quote is widely attributed to the late gay Supervisor Harvey Milk, though it is unclear when he first said it.

If approved, the art piece would be installed for two years and be illuminated during the evenings, though Ben Davis, Illuminate's founder and chief visionary officer, told the Bay Area Reporter last week that he hoped the public would embrace seeing it be a permanent addition to the bandshell.

The operations committee of the San Francisco Recreation and Park Commission unanimously voted 3-0 to support the bandshell project at its meeting Thursday (February 6), at which no one spoke out against the proposal.

Lisa Bransten, deputy director of partnerships at the San Francisco Recreation and Park Department, explained that the Milk quote was chosen because it "reflects the importance of breaking silence as will happen in the space when it is alive with performers."

Commissioner Gloria Bonilla said at the hearing she didn't see why the project would not be approved later this month. She told parks staff and Illuminate's Davis that she was "quite awestruck" by the proposal for the Music Concourse.

"Anytime I went there I always thought of all these venues I had to pay to go into and didn't have the resources," Bonilla said. "I always said I wish the bandshell was more accessible and available to the community."

Commissioner Kat Anderson also praised the project as "quite gorgeous."

The city's historic preservation commission will take up the proposal at its meeting February 19. Also that day the arts commission's visual arts committee will vote on whether to approve the Milk lighted art piece for the bandshell facade.

Should both oversight panels approve the project as expected, then the full Recreation and Park Commission will vote to approve it at its February 20 meeting.

The total cost for the bandshell project is $800,000 and it is being paid for by private funds. Davis told the B.A.R. last week that Illuminate has $150,000 yet to raise, which he noted was fitting in light of the park's anniversary year.

It is the nonprofit's intention to gift the new lighting and sound equipment to the city's parks department so local performance groups could continue to use it. Currently, groups need to truck in their own equipment if they wish to perform at the bandshell.

"We create nothing that requires paid admission," Davis said at Thursday's hearing.

Davis, a Glen Park resident, said he and his co-workers at Illuminate have a "deep" love for the city's parks and are excited to help activate the Music Concourse with music. Thus, working on the Spreckles Temple project "has been extremely exhilarating," he noted.