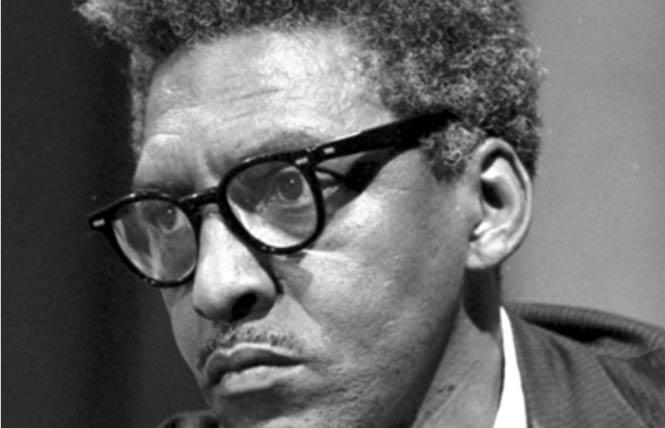 Governor Gavin Newsom announced Wednesday that he has granted a posthumous pardon to gay, black civil rights activist Bayard Rustin, whose 1953 arrest in Pasadena, California on vagrancy charges led to jail time and inclusion on the sex offender registry.

According to the Los Angeles Times, which first reported the story, Newsom said that the pardon for Rustin, who died in 1987 at age 75, was part of a broader clemency initiative that will also look at past convictions of other LGBTs who were prosecuted under discriminatory laws.

"Generations of LGBT people — including countless gay men — were branded criminals and sex offenders simply because they had consensual sex," Wiener said in a February 5 statement. "This was often life-ruining, and many languished on the sex offender registry for decades. The governor's actions today are a huge step forward in our community's ongoing quest for full acceptance and justice."

Wiener and Weber, chairs of the Capitol's Legislative LGBTQ and Black caucuses, respectively, wrote in their January 21 letter that "Mr. Rustin lived during a period of time in our nation's history where his identity was under constant assault. Racial tensions were at a heightened state, segregation was in full effect, and Jim Crow laws were being enforced in various states throughout the country. This was also a time when homosexuality was criminalized, and LGBTQ people across the country were under a constant threat of violence and targeting."

According to the letter, on January 21, 1953, Rustin was visiting Pasadena as part of a lecture tour on the topics of anti-colonial struggles in West Africa. Shortly after his speech, Rustin was arrested after being discovered having sex with two men in a parked car. Rustin was cited for vagrancy, which Wiener and Weber pointed out was "a common charge against gay men for engaging in consensual sexual behavior."

Rustin spent 50 days in Los Angeles County Jail and was ordered to register as a sex offender, Wiener and Weber's letter stated.

Los Angeles County District Attorney Jackie Lacey supported the pardon for Rustin and said last month that she joined in Wiener and Weber's request to the governor.

"Civil rights champion Dr. Martin Luther King, Jr. said, 'The time is always right to do what is right.' For our friend, Governor Newsom, that time is today," EQCA Executive Director Rick Zbur stated. "We are grateful to the governor for demonstrating our California values by pardoning civil rights hero Bayard Rustin — a trusted aide to Dr. King — and for creating a system for other LGBTQ+ people to seek pardon from unjust convictions. Today, Governor Newsom, and indeed the entire Golden State, did what is right."

Under Newsom's clemency initiative, LGBTQ Californians convicted for vagrancy, loitering, sodomy or other laws used to prosecute people for having consensual adult sex will be eligible to apply for pardons. The Board of Parole Hearings investigates pardon applications and makes recommendations to the governor, who has sole constitutional authority to grant them.

"In California and across the country, many laws have been used as legal tools of oppression, and to stigmatize and punish LGBTQ people and communities and warn others what harm could await them for living authentically," Newsom said in a written statement, posted online. "I thank those who advocated for Bayard Rustin's pardon, and I want to encourage others in similar situations to seek a pardon to right this egregious wrong."

Newsom had alluded to a broader clemency program when his office issued a statement last month regarding the request for Rustin. "History is clear. In California and across the country, sodomy laws were used as legal tools of oppression," he stated at the time.

California repealed laws that criminalized consensual sex between same-sex couples in the 1970s. Newsom noted that in 1997, the state passed a law that for the first time allowed those convicted under such laws to remove their names from lists of registered sex offenders.

Rustin worked closely with King. He was one of the key organizers of the 1963 March on Washington for Jobs and Freedom, and he "was integral in various other nonviolent movements, boycotts, and protests to end racial discrimination," according to the letter from Wiener and Weber.