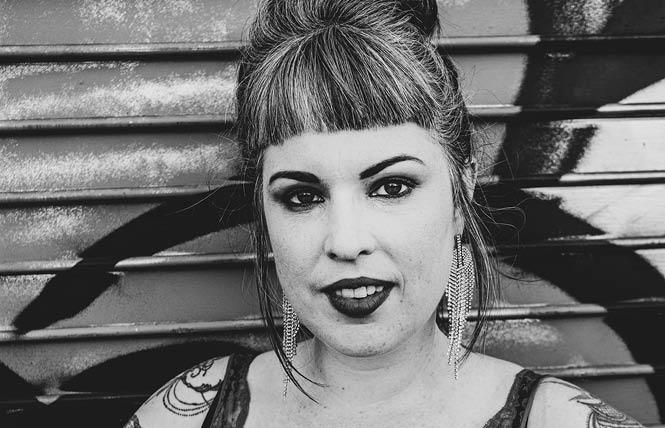 Folsom Street Events, which puts on the Folsom Street Fair and Up Your Alley leather and kink festivals in San Francisco's South of Market neighborhood, has a new executive director in Sarah Patterson, the nonprofit announced early Wednesday.

Patterson, who said she identifies as a leatherdyke, replaces former executive director Patrick Finger, whose two-year tenure was marked by some strife. She started the job January 14, Folsom Street Events board President Jennifer Schuster wrote in an email to the Bay Area Reporter.

Schuster said in a news release that the selection of Patterson was unanimous.

"We have the utmost confidence in Sarah's abilities and look forward to introducing her to our community, partners, and volunteers," Schuster stated.

Patterson, 35, formerly director of development and communications at the Center on Race, Poverty and the Environment's Oakland office, is a leatherwoman with a long history at social justice organizations, the release stated.

Originally from New England, Patterson was the co-founder and director of Persist Health Project, a New York City-based nonprofit focused on helping sex workers and trafficking survivors. She also is a board member emeritus at Trans Lifeline, a 24-hour hotline for transgender people going through a crisis.

"I am eager to bring my experience and deep commitment to adult alternative lifestyle communities to FSE," Patterson stated. "Folsom is a crucial part of many community members' first experiences with alternative lifestyles. All of us have our place in that history, our journeys in leather, and they all matter. I am looking forward to showcasing that legacy with our staff, board, and amazing volunteers this Folsom 2020."

Kathleen Connell, a co-founder of the Folsom Street Fair, spoke positively of the appointment.

"I am looking forward to seeing Sarah at the helm. Giving grants to community organizations through the Fair is a tradition Michael Valerio and I began in 1984 during the dark days of AIDS," Connell said in the release. "Good luck to Sarah and the many volunteers who make Folsom happen."

FSE has donated $7 million to charity in its 36-year history. The money goes to local and some national nonprofits.

The Folsom Street Fair, a festival celebrating leather and kink culture, is one of the largest events of its kind. Held annually in September, it was founded in 1984 as AIDS was decimating the leather and LGBT communities in the South of Market neighborhood.

That fair has been so successful, in fact, that it has not only spawned imitations the world over — such as Folsom Street East in New York City and Folsom Europe in Berlin — but also the Up Your Alley street fair held annually in July.

Colloquially known in the community as Dore Alley, the smaller event is less oriented toward tourism and more focused on expressions of gay male sexuality than the Folsom Street Fair, as the Bay Area Reporter has previously reported.

"Sarah models what leadership, mentorship, and collaboration is," stated Lola Ursula, co-founder of the Bay Area kink party Femmes on Top and a 2020 contestant for Ms. SF Leather.

JM Jaffe, founder of Trans Health Consulting, co-chair at the National LGBT Primary Care Alliance, and a member of the Trans Advisory Committee at the San Francisco Office of Transgender Initiatives, said Patterson has been involved in the kink community for over a decade.

"She's deeply committed to employing an intersectional lens, bringing trans sensitivity and racial justice to the forefront of everything she touches," Jaffe stated.

Past dustups
The 2018 edition of the fair was the first for Finger. He was hired for the position in November 2017. According to the organization's 2017 IRS Form 990, the most recent available, Finger earned $113,000 in salary and benefits as the managing director, his title at that time. The previous executive director's salary and benefits were about $108,000, according to the organization's 2016 Form 990.

Finger's tenure was not without controversy. As the B.A.R. previously reported. in 2019 there was a contract dispute between the Sisters of Perpetual Indulgence, a charitable drag nun organization, and Folsom Street Events. It was eventually settled before that year's fair.

In a widely shared Facebook post, Sister Flora Goodthyme said that the organization was "being squeezed out" of the festival.

In 2017, when Finger was managing director of the fair, the Golden Gate Wrestling Club's application for a beer booth was rejected. At the time, Gene Dermody, a founder of the wrestling club, told the B.A.R. that it had had a beer booth at Folsom for 24 of the fair's last 26 years. Finger would not specify a reason for the wrestling club's application being rejected.

When asked Patterson's salary, Schuster said only that it is "a competitive salary commensurate with her many years of nonprofit leadership experience."

This year's 37th annual Folsom Street Fair is set for September 27. The Up Your Alley fair will take place July 26.

Updated: 1/29/20: This story has been updated to include how Ms. Patterson identifies.

Updated, 1/31/20: This story has been updated to correct that Kathleen Connell was a co-founder of the Folsom Street Fair and tp clarify the contract dispute last year between the Sisters of Perpetual Indulgence and FSE.