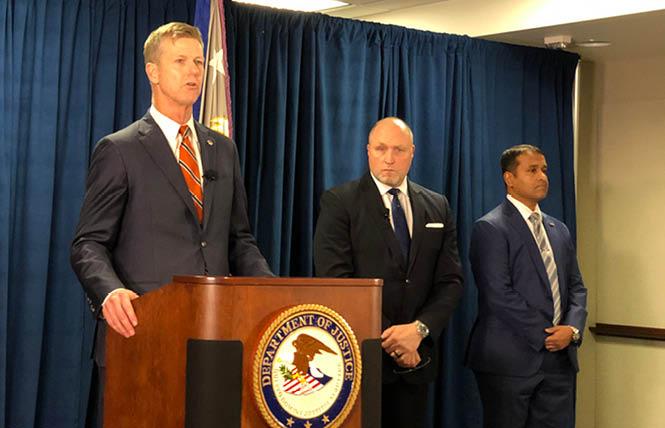 San Francisco Public Works Director Mohammed Nuru — who has been indicted by federal prosecutors on a public corruption charge — is on administrative leave, according to a news release Tuesday from Mayor London Breed.

"I'm asking the city attorney and the controller to conduct a thorough review of any implicated city contracts or other decisions and to investigate any suspected violations of the law or the stringent guidelines and rules that ensure the integrity of our contracting process," Breed stated. "Each and every one of us who works for the city must hold ourselves to the highest standard. I accept nothing less for myself."

Breed added, "We do not know all the facts of the case at this moment and what will transpire through this investigation going forward."

At a news conference Tuesday afternoon at the Phillip Burton Federal Building in downtown San Francisco, David Anderson, United States attorney for the U.S. District Court for the Northern District of California, laid out the case against Nuru, who was indicted alongside Nick James Bovis, who owns Lefty O'Douls and Gold Dust Lounge restaurants on Fisherman's Wharf.

The 75-page federal complaint goes into five criminal schemes involving the men. Both are charged with one count of committing honest services wire fraud. Nuru is additionally charged with lying to the FBI.

After agreeing to cooperate with the investigation — and not disclose its existence — after an initial arrest January 21, Nuru lied to federal investigators about revealing it to third parties, Anderson said.

The first allegation in the complaint is that Nuru and Bovis schemed to bribe a member of the San Francisco Airport Commission so that a Bovis-related company could have a restaurant there.

Nuru and Bovis tried to bribe the commissioner with an envelope filled with $5,000 in cash, but the act was not consummated, Anderson said.

The second allegation is that an unnamed Chinese billionaire, referred to in the complaint as Developer 1, gave Nuru free lodging and travel while he was "developing a large multimillion dollar mixed-use project in San Francisco."

"Nuru was provided with a bottle of wine worth $2,070," Anderson said. "These are required to be disclosed and were not disclosed by Nuru."

The third scheme alleged is a quid pro quo between Nuru and Bovis — benefits from Bovis in exchange for commercial lease rights inside the Transbay Transit Center in the South of Market neighborhood.

"Nuru intervened in that process for the benefit of Bovis," Anderson said.

The fourth allegation is that Nuru gave Bovis inside information about portable bathrooms and homeless shelters so that Bovis could win city contracts for them.

"Homelessness and street defecation are profoundly impacting San Francisco," Anderson said. "Nuru was giving Bovis inside information and manipulating specifications to give Bovis an unfair advantage."

The fifth allegation is that Nuru received free labor and construction equipment from city contractors for his own personal home improvements in Colusa County, in California's Central Valley.

Nuru was appointed public works director by the late Mayor Ed Lee in 2011. He had been the subject of questions about his ethics, but had been reliably loyal operator in city politics and government for former San Francisco mayors Willie Brown, Gavin Newsom, and Lee, according to the San Francisco Chronicle.

His Twitter handle is @MrCleanSF, an apparent reference to his work cleaning city streets.

"This is a sad day for San Francisco," Haney wrote on Twitter. "We urgently need a top to bottom restructuring of the Dept, with much greater public oversight, accountability and transparency."

Haney criticized Breed for not firing Nuru after the indictment.

"There is plenty of information here to justify his dismissal," Haney tweeted. "We should begin immediately to secure both an interim and permanent plan for leadership at DPW, as well as broader accountability."

"The corrupt behavior ... did not happen in a vacuum," he added.