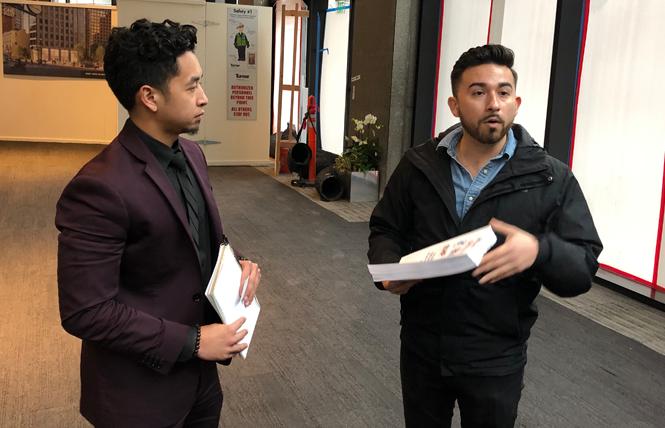 Friends of a gay San Francisco man who a federal judge says was erroneously deported by United States Immigration and Customs Enforcement presented a petition to the local office of Senator Dianne Feinstein January 21 to urge his safe return to the country.

The petition, which at press time collected 28,145 signatures, asks the federal government to comply with a court order to bring Omar Yaide back to the U.S. to have his asylum hearing adjudicated.

"Oumar Yaide has a right to escape LGBTQ persecution and return to his San Francisco community," the petition states. "[The Department of Homeland Security] must follow the federal order to ensure Oumar a safe return to the U.S."

Yaide's friends had raised $14,000 for him following his August arrest. Four of them showed up to deliver the petition to Feinstein's San Francisco office at 1 Post Street, along with Edwin Carmona-Cruz, a spokesman for Yaide's attorney, Sean McMahon.

Carmona-Cruz told the Bay Area Reporter that District 9 Supervisor Hillary Ronen — who represents the district Yaide resided in — will be introducing a resolution at the Board of Supervisors January 28 meeting asking DHS to return Yaide to the U.S.

Ronen's office did not immediately respond to a request for comment.

Carmona-Cruz told the B.A.R. that the board will vote on the resolution February 4, before which there will be a rally at City Hall in support of Yaide.

"The senator's office is doing everything we can to ensure Oumar gets home safely," he told Yaide's friends, who emphasized that for a gay man in Chad, where homosexuality is illegal, it may be a matter of life or death.

"Our hope is to have Senator Feinstein — as ranking member of the Senate Judiciary Committee — put pressure on the DHS and to show support for Oumar to be brought back home," said Yaide's friend, Haley Kay.

Kay said she is planning a fundraiser for Yaide at El Rio, an LGBT bar in the Mission district, Friday, January 31, from 6 to 9 p.m.

As the B.A.R. previously reported, Judge Charles Breyer of the U.S. District Court for Northern California, brother of U.S. Supreme Court Justice Stephen Breyer, ordered December 18 that Yaide, 32 (known in court documents as Abderman Yaide), has to be returned to the U.S. from Chad.

Yaide was seeking asylum in the U.S., where he had been residing without legal permission since 2009, according to court documents.

At the time of his arrest by ICE, Yaide was working at a restaurant and lived in the Mission, Kay said. He was held in Yuba County Jail (outside Sacramento), which contracts with ICE to hold people in the U.S. without legal permission.

"[Yaide] faces the loss of his right to have his motion to reopen adjudicated, torture, imprisonment, and death," Breyer wrote. "For its part, the government identifies no hardship it will undergo."

The petition gained many signatures through being posted on Daily Kos, a website popular with progressive activists.

"To us it's important to uplift the voices of immigrants, who continue to be deported, and especially LGBTQ immigrants," said Ntebo Mokuena of Daily Kos.

Yaide is not yet back in the U.S., but it is hoped he will return soon, according to Carmona-Cruz.

Feinstein was not at her San Francisco office at the time, as she's sitting in the Senate impeachment trial of President Donald Trump in Washington, D.C.