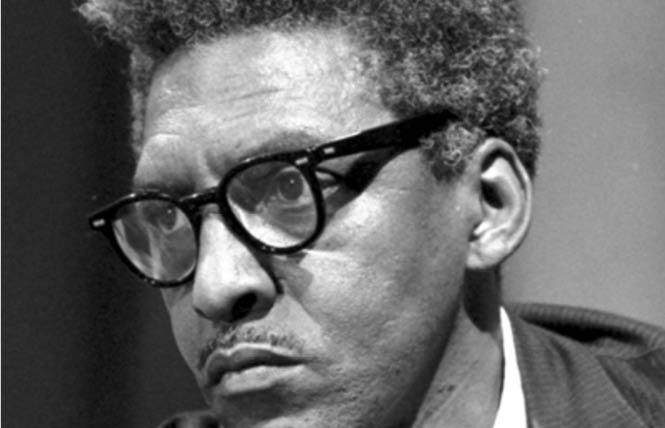 According to a draft of the January 21 letter sent to Newsom, gay state Senator Scott Wiener and African American Assemblywoman Shirley Weber wrote that Rustin's 1953 arrest in Pasadena, California on vagrancy charges led to Rustin spending 50 days in Los Angeles County Jail. He was also ordered to register as a sex offender.

Rustin, who died in 1987 at age 75, was part of the Reverend Dr. Martin Luther King Jr.'s inner circle during the civil rights movement. He was one of the key organizers of the 1963 March on Washington for Jobs and Freedom, and he "was integral in various other nonviolent movements, boycotts, and protests to end racial discrimination," the letter states.

Both Democrats, Wiener, of San Francisco, and Weber, of San Diego, are the chairs of the Legislative LGBTQ and Black caucuses, respectively, in the Capitol. They wrote in their letter that Los Angeles County District Attorney Jackie Lacey has informed them that she supports the pardon request.

In an email Wednesday morning, Lacey confirmed she's joining with the two caucuses in the effort to posthumously pardon Rustin.

"Mr. Bayard Rustin was one of the most significant civil rights leaders of our times, whose great accomplishments, unfortunately, were restricted by a 1953 conviction in Los Angeles County for activities between consenting adults that should never have been criminalized in the first place," Lacey wrote. "I am joining with the Legislative LGBTQ Caucus and the California Legislative Black Caucus in asking Governor Newsom to right this terrible injustice and allow Mr. Rustin to take his rightful place in the history of our nation."

In a statement, Newsom said he would consider the request.

"History is clear. In California and across the country, sodomy laws were used as legal tools of oppression," Newsom said in an emailed comment from his office. "They were used to stigmatize and punish LGBTQ individuals and communities and warn others what harm could await them for living authentically. I thank those who are advocating for Mr. Bayard Rustin's pardon. I will be closely considering their request and the corresponding case."

"Although Bayard passed away in 1987, such a pardon would be a symbolic gesture recognizing a violation of the concept of equal justice under the law," he said in a release issued by Wiener's office Tuesday following a news conference. "During the 1950s, gay men were victimized by laws that were not equally applied to heterosexuals. The rampart homophobia of our society led to stigmatization of gay men, often resulting in the loss of employment, damage to familial relationships and sometimes even suicides. I give my full support for the efforts of Senator Scott Weiner, the LGBTQ and Black Caucuses in asking Governor Newsom to pardon my late partner Bayard Rustin."

According to the letter, on January 21, 1953, Rustin was visiting Pasadena as part of a lecture tour on the topics of anti-colonial struggles in West Africa. Shortly after his speech, Rustin was arrested after being discovered having sex with two men in a parked car. Rustin was cited for vagrancy, which Wiener and Weber pointed out, was "a common charge against gay men for engaging in consensual sexual behavior."

Rustin's public LGBTQ activism came later in his life. The letter notes, however, that Rustin didn't shy away from discussion about his sexual orientation, and those in his inner circle knew he was gay. The incident in Pasadena, though, embarrassed many of Rustin's religious and political colleagues and led to his immediate removal from the Fellowship of Reconciliation, an interfaith peace organization, the letter states.

"Mr. Rustin lived during a period of time in our nation's history where his identity was under constant assault," the letter states. "Racial tensions were at a heightened state, segregation was in full effect, and Jim Crow laws were being enforced in various states throughout the country. This was also a time when homosexuality was criminalized, and LGBTQ people across the country were under a constant threat of violence and targeting.

"Indeed, President Dwight D. Eisenhower had just issued an executive order banning the employment of LGBTQ individuals in the federal government at the time of Mr. Rustin's conviction," states the letter.

Wiener and Weber also noted that during the height of Rustin's involvement with the civil rights movement, and in an effort to discredit that movement, his arrest in Pasadena was "pushed into the spotlight when Senator Strom Thurmond of South Carolina read Mr. Rustin's entire Pasadena arrest file into the Congressional Record," according to their letter.

That resulted in many civil rights leaders distancing themselves, at least publicly, from Rustin and his activism, the two lawmakers noted.

"Mr. Rustin's conviction and registered sex offender status haunted him for the rest of his life," the letter to Newsom states, "and it continues to tarnish his name, despite his death 33 years ago. Indeed, California's treatment of Mr. Rustin tarnishes our entire state."

Updated, 1/21/20: This story has been updated to include comment from Governor Newsom, Rustin's surviving partner, and to correct that Assemblywoman Shirley Weber represents San Diego. Updated 1/22/20 to add DA Lacey's statement.

Newsom names Assemblywoman Weber as secretary of state
Sign up!