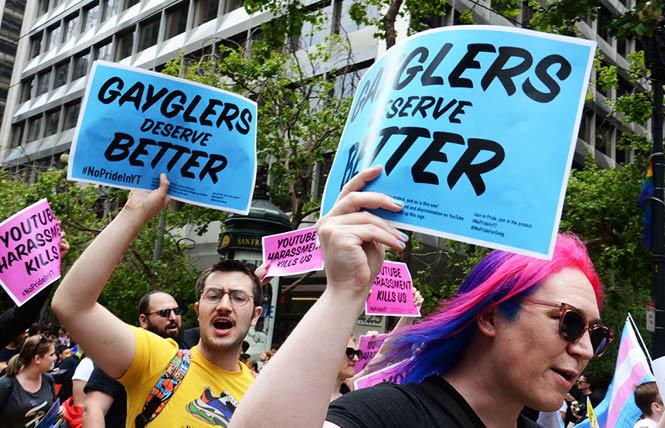 As preparations ramp up for the 50th annual San Francisco Pride parade, members of the LGBT community are questioning the role of Bay Area-headquartered tech corporations in the festivities celebrating LGBT people and culture.

Members of the San Francisco Pride nonprofit organization voted January 15 to ban Google and its affiliates, including YouTube, from the parade, as well as the Alameda County Sheriff's Office.

The vote would have to be approved by the Pride board of directors to become binding. The Pride board's next scheduled meeting is February 5.

Only seven of the 326 members of Pride voted to ban Google and its affiliates from the parade, according to Pride interim executive director Fred Lopez.

"We understand the concern one group has raised about some of Pride's corporate sponsors, and we take their concerns seriously," Lopez wrote in an email to the Bay Area Reporter January 17. "As we get ready to celebrate our 50th annual Parade and Celebration, our goal remains the same as it was for our first — to be as inclusive as possible and reflect the diversity of our communities."

Separately, the past president and founder of Sonoma County Pride wrote to San Francisco Pride officials last month stating that Facebook should be prohibited from participating in the parade.

Tyler Breisacher, a gay man and former software engineer with Google who left in April 2018 over Google's corporate sponsorship of the Conservative Political Action Conference, said he first became concerned about Google's participation in Pride after a controversy between YouTube and gay video-producer Carlos Maza.

Crowder defended himself, saying that he was doing comedy. After an investigation, YouTube determined that Crowder had not violated its policies.

Breisacher said he agrees with Maza that YouTube policies against harassment should have been applied in this case and shortly thereafter joined Pride as a general member to advocate for Google's removal from San Francisco Pride.

"I was upset and I said 'let's go to a Pride meeting and see what we can do about this,'" Breisacher said in a phone interview with the Bay Area Reporter January 16. "It matters what SF Pride does because other places look to us. Here and (in) New York are the most visible ones."

Breisacher is being joined in his efforts by Laurence Berland, another former Google employee who had been fired, according to his Twitter bio.

The San Francisco LGBT Pride Celebration Committee Inc., the nonprofit that oversees the parade and festival, is made up of members who elect a board of directors. The board makes the final decisions and will have to approve or reject the amendment Breisacher and Berland advocated for. It was that amendment that members approved January 15.

San Francisco Pride had considered preventing Google's participation in 2019, but ultimately decided against it.

"We appreciate the engagement of community members who reached out to San Francisco Pride with their concerns about Google," a June 26, 2019 news release stated. "Google has been a considerate partner of SF Pride for a number of years, and has historically been a strong ally to LGBTQ+ communities."

When asked January 17 how Pride should recoup the money — as corporate sponsorships help cover the cost to hold the event, which also funnels tens of thousands of dollars each year to local LGBT nonprofits and athletic teams — that would be lost from losing Google and its affiliates as sponsors, Breisacher and his associate, Maxie Bee, sent an emailed statement to the B.A.R.

"You don't need to maximize your spending power to do that, and you arguably hurt your mission — and your budget — if you take money from bad allies," the statement reads. "Even just including bad allies can have a negative effect on the community and the event's operating costs, without even taking them as sponsors of the event itself."

The statement continues: "Maybe the city of San Francisco would be willing to expand their grants to make up the difference. Maybe Google will actually get its act together and be the ally they want us to believe they are, and they'll be invited back!"

District 8 Supervisor Rafael Mandelman, a gay man and lone LGBT person on the Board of Supervisors, told the B.A.R. that he wants to "respect" the Pride committee's process and believes it is up to the event's organizers to decide if corporations should participate in the parade or not.

"This is really up to the Pride committee and I will respect their decision," said Mandelman.

But he noted that, "Many queer people are very proud of the place where they work, and we have a lot of queer people working in tech. I am sure they would be quite disappointed if they couldn't participate in the Pride parade."

Facebook
Regarding Facebook, Chuck Ramsey, a gay man who is the past president and founder of Sonoma County Pride, wrote in a recent email to Pride officials and the B.A.R. that he thinks Facebook should be banned in light of what he said was a lack of enforcement of its community standards.

Ramsey said January 2 that he reported a user's comment about the LGBT Pride flag being "evil" just like the Confederate flag. While Facebook has a policy against "self-admission to intolerance on the basis of" a number of protected characteristics, such as race, religion or sexual orientation, the comment was not removed, noted Ramsey.

"I am more concerned about Facebook's position at this point than I am about the original commenter's post," Ramsey wrote in the email. "I also do not think it is appropriate to have a Facebook contingent marching in SF Pride's parade if this is the best they can do for our community."

Lopez wrote to the B.A.R. January 10 that "we appreciate Mr. Ramsey for bringing this to our attention and we will be in touch with him directly soon."

As of January 17, Ramsey told the B.A.R. that Lopez had not gotten in touch with him.

While Breisacher did not say if Facebook should also be prohibited from Pride, he said it was something to investigate.

"With Facebook, they have plenty to point to — the real names policy, Cambridge Analytica," Breisacher said. "There is plenty to talk about there."

Breisacher was referring to two controversies in Facebook's recent past.

Cambridge Analytica, a political consulting firm assisting in the 2016 Republican presidential campaign of Donald Trump, harvested the personal information of tens of millions of Facebook users without their knowledge and used it for political purposes.

The names policy led to a September 17, 2014 meeting with LGBT activists, including Sister Roma of the Sisters of Perpetual Indulgence. Drag queens and members of the trans community were concerned that Facebook wouldn't let them use names that best reflected their identities.

After that meeting, Facebook decided not to change its policy but it did apologize to the LGBT community for the harm that was done and promised to change how the policy is enforced.

Sheriff's office
The January 15 amendment passed by Pride members, also asked for the Alameda County Sheriff's Office to be removed from the parade, Breisacher said. The department was heavily criticized by progressive activists after evicting homeless women and their children who'd been occupying a vacant house in Oakland before dawn January 14.

Police participation in Pride has been a thorny issue in its own right. Last year, police detained two demonstrators who blocked the parade route in protest of the police's presence.

In Sacramento, uniformed police were initially disinvited from participation in that city's 2019 Pride, but they were invited back after the police created an LGBTQ liaison and an LGBT community advocacy committee, according to the Sacramento Bee.

Berland, Pride board President Carolyn Wysinger, the Alameda County Sheriff's office and Facebook officials have yet to respond to the B.A.R.'s requests for comment.

The Pride board of directors is scheduled to meet February 5 at 7 p.m. at its office, located at 1663 Mission Street, Suite 560.