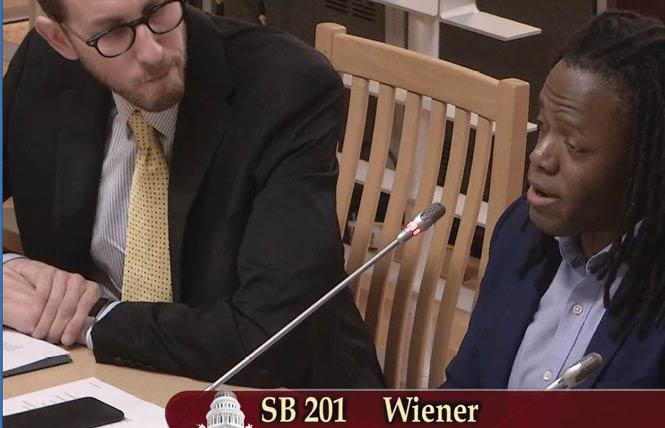 A California bill aimed at banning unnecessary medical procedures on infants who are intersex died in committee Monday, though its author vowed to bring the bill back in the future.

Senate Bill 201 would have postponed surgeries on intersex infants until they turn 6 years old unless they are needed to protect the health of the child. Such individuals are born with both male and female genitalia and often undergo surgery shortly after birth to assign them to one gender. Because the procedures are mostly irreversible, it can present complications to the person later in life if they determine they are the opposite gender.

The legislation, authored by gay state Senator Scott Wiener (D-San Francisco), has faced fierce opposition from medical lobbying groups since being introduced last year. They have criticized the bill as being too broad and taking away control from both parents and physicians.

At the direction of Senator Steve Glazer (D-Orinda), chair of the Senate's business, professions and economic development committee, Wiener last April agreed to turn the legislation into a two-year bill in order to address the objections. Several amendments Wiener made this week to the bill were not enough to overcome the concerns raised by Glazer and other members of the committee.

Although they expressed agreement for ending sexual reassignment surgeries on infants, they nonetheless said more work was needed with Wiener's legislation to achieve that goal.

"I do think we can find a pathway," said Glazer. "I don't think this bill is it."

In the end, four senators on the committee voted against the bill and two voted in support. Glazer was one of three who abstained. In a statement issued immediately after the vote, Wiener expressed his disappointment with the committee's voting down the civil rights bill.

"Intersex people deserve legal protection, and we are committed to ensuring that protection under California law," stated Wiener. "Today's vote was a setback, but this is only the beginning. We aren't giving up on protecting intersex people from non-consensual, invasive, dangerous surgery."

He also pledged to revive the legislative effort.

"As with many civil rights struggles, it sometimes takes multiple tries to prevail. We will be back," stated Wiener, adding that he remains "hopeful that in the future we will be able to pass similar legislation."

Speaking in support of the bill was Bria Brown-King, who is intersex and lives in Delaware. They were born with congenital adrenal hyperplasia (CAH) and at age 13 underwent a vaginoplasty and clitoral reduction at the suggestion of an urologist, though now they regret that decision.

"These surgeries are often carried out based on an assumption of what the child would want as an adult," said Brown-King. "I never did use my vagina in the way the doctor thought. Most of my partners were cisgender women."

In his testimony to the committee, Wiener stressed that the bill does not transfer the power to make medical decisions to 6-year-old children. It merely aims to ensure they have a voice in those decisions, which would continue to be made by their parents in consultation with their doctor.

"This legislation ensures people who were born intersex are able to make their own choices about their health and gender identity instead of having other people make those irreversible surgical choices for them," said Wiener. "If having a medically unnecessary procedure on your body, wouldn't you want to have some input into that decision as opposed to having other people make those decisions?"

Dr. Hillary L. Copp, a pediatric urologist in the UCSF Department of Urology, argued that Wiener's bill is "the wrong approach" as it goes too far in restricting the medical procedures that would be considered necessary to perform on infants.

"SB 201 treats every child the same," said Copp, adding that the bill also ignores "the impact of delayed treatment."

Senator Dr. Richard Pan (D-Sacramento) also expressed concerns that the legislation was too broad prior to his voting against it.

"I think the broadness is a bit concerning," said Pan, though he noted, "I think the intent of the bill and where we want to go is in line with where the medical profession wants to go. I think the concern is the law is a blunt instrument."

Senator Cathleen Galgiani (D-Stockton), a lesbian and member of the Legislative LGBTQ Caucus, voted in support of the bill. She argued for the committee not to kill the legislation and allow Wiener to continue to tweak it as it moved through the legislative process.

"I think it is time to stop and look at the harm that has been done and how to put a pause on that," she said, adding that she has "trust in the medical field" to determine if surgery was necessary to be performed on an intersex infant or could be postponed to a later date.

"I think there is a pathway to get there," said Galgiani, one of just two votes in support of advancing the bill.