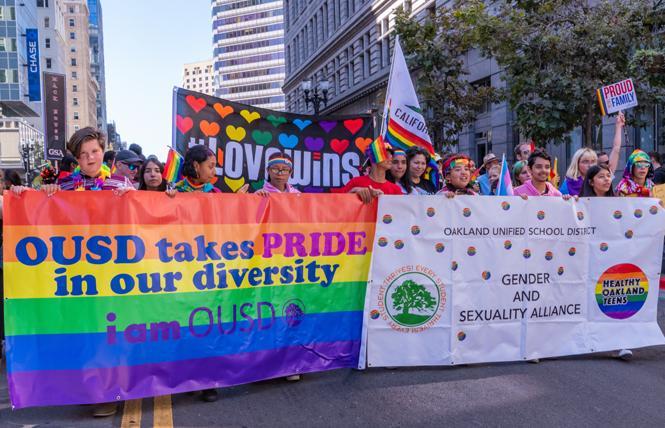 The Oakland Unified School District and its Gender and Sexuality Alliance were one of many contingents in the sixth annual Oakland Pride parade Sunday, September 8, 2019. Photo: Jane Philomen Cleland

The conversion of the building that houses Oakland LGBT bars Club 21 and Club BnB into office space means that Oakland Pride is losing its offices, according to an Oakland Pride news release issued January 3.

As the Bay Area Reporter previously reported December 12, Club 21 and Club BnB are slated to close later this month after the building they are housed in at 2120 Broadway was sold to San Francisco-based real estate firm Ellis Partners.

It was announced Friday that the nonprofit Oakland Pride, which has its offices and storage in the building — and puts on the parade and festival every September — would have to move, too.

Uribe, a queer man, said that the Pride organization has not yet found a new space.

"We've been calling around. Kaplan's office said she was looking for space, but the reality is space is at a premium," Uribe said in a phone interview with the B.A.R., referring to lesbian at-large Oakland Councilwoman Rebecca Kaplan. "We store most of the equipment for Pride — canopies, tables — in the building."

Uribe said that Oakland Pride needs between 2,000 and 2,500 square feet of office space, and that the Oakland LGBTQ Community Center can't house it because the center's building at 3207 Lakeshore Avenue lacks enough space.

"Club BnB has been home to our organization since I first joined the Oakland Pride team," Katelyn Larson, Oakland Pride's event coordinator, said in the release. "The club owners' generous donation of our office space has saved us tens of thousands of dollars in rent every year and enabled us to devote our time and energy toward putting on events and providing resources to Oakland's LGBTQ+ community."

Club 21, which primarily served the Spanish-speaking LGBT community, announced in an email Wednesday that two of its parties — Latin Explosion and La Bota Loca — will be moving to the Level 13 nightclub at 341 13th Street in Oakland, though it was unsure at press time if these will continue to be weekly.

Ellis Partners and Kaplan did not immediately return requests for comment.

Uribe has launched a change.org petition urging Ellis Partners to allow the two gay clubs to remain in the space. To view it, go to https://bit.ly/2T4Fodj

Updated: 1/6/20: This story has been updated to include the change.org petition.