by Cynthia Laird and John Ferrannini 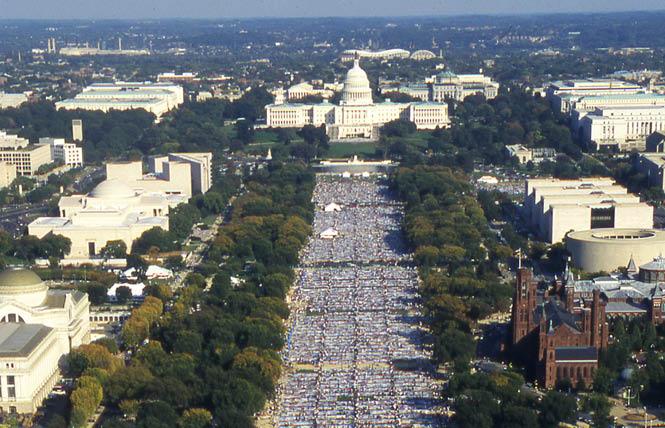 The AIDS quilt was last fully displayed in October 1996 on the National Mall in Washington, D.C. Photo: Rick Gerharter

The AIDS quilt — all 50,000 panels — will return to the Bay Area, under a new agreement that transfers stewardship of the mammoth AIDS memorial to the National AIDS Memorial Grove in San Francisco.

Additionally, the Library of Congress will preserve the quilt's vast archival collections in Washington, D.C.

Details of the arrangement were announced during a news conference at the Library of Congress in Washington Wednesday morning.

The quilt will be moved to a warehouse near the Oakland International Airport from its current location in Atlanta, John Cunningham, executive director of the AIDS grove, told the Bay Area Reporter in an exclusive interview Monday.

Speaking by phone before leaving for Washington, Cunningham told the B.A.R. that the Names Project Foundation, current keepers of the quilt, had for some time been looking for a long-term permanent home for the AIDS memorial.

He told the B.A.R. that in February, he was approached about the possibility of the San Francisco-based nonprofit being that home by Dan Bernal, a gay man who is HIV-positive and chief of staff for House Speaker Nancy Pelosi's (D-San Francisco) district office and vice president of the San Francisco Health Commission.

Julie Rhoad, president and CEO of the Names Project, told the B.A.R. that the nonprofit will transfer its operations to the grove and "will close and cease operations" early in 2020. It will cease to exist entirely by the end of next year.

Rhoad said that she is excited to have found "the right partners" in the grove.

"This is the culmination of chapter two of the history of the AIDS Memorial Quilt and the Names Project. It makes perfect sense for the quilt to return to its birthplace," Rhoad said. "I'm very excited for this."

Cunningham said that the AIDS grove and the quilt, "through their very existence, have had a tremendous impact in telling the story of the AIDS crisis and the AIDS movement, a story of social justice."

Smith said that he and Jones are happy that the quilt is coming back to where it was born, and said that the two have become closer in the last few months.

"I think it's a wonderful moment in the history of the quilt," Smith said by phone. "I'm delighted it's coming back to San Francisco and we're opening up a new chapter of visibility for the quilt. It's a wonderful marriage — I've always had great respect for the people at the grove. You couldn't have a better partner."

Smith has been consulting on "the logistics of this very complicated move" for the past two months. The last time the full quilt was put on public display was 1996 when it was on the National Mall in Washington, D.C. At that time it was over a mile long and several hundred yards wide, Smith said.

Jones told the B.A.R. that the quilt will be "back where it belongs."

"I am thrilled and grateful," he said.

Rhoad said that while the first chapter was with Jones and Smith, the second chapter was focused on "stewardship" and preserving the quilt for future generations.

Cunningham told the B.A.R. that while Jones has been kept apprised of the talks, he was "not actively engaged" and did not play an active role in the negotiations. Jones and the Names Project have a stormy history, as the nonprofit fired Jones in 2003. He sued and the two parties settled a couple of years later.

House Speaker Nancy Pelosi recalls the early days of the AIDS Memorial Quilt during Wednesday's announcement at the Library of Congress. Photo courtesy of YouTube

Ceremony
At the announcement, Librarian of Congress Carla Hayden noted the quilt was "a symbol of hope, healing, and remembrance."

Congresswoman Barbara Lee (D-Oakland), co-founder of the Congressional HIV/AIDS Caucus, said that the quilt will be stored in San Leandro, part of her congressional district, near the airport.

"We stand here in remembrance of people who died of AIDS," she said. "Their story will be known by future generations."

Congressman John Lewis (D-Georgia), who represents Atlanta where the quilt is currently, said the new agreement is a good one.

"From the earliest days of the AIDS crisis, this community provided for each other," he said. "From the heights of the civil rights movement we spoke of love — love your brother ... love your friends."

Cunningham said that financial support for the project came in part from Gilead Sciences, which "stepped up to help."

Pelosi, a mother of five, recalled when Jones first broached the topic of a memorial quilt.

Jones pointed out, "One of the greatest obstacles to fighting AIDS remains stigma."

In a statement to the B.A.R., Pelosi said it "is a privilege to welcome the AIDS Memorial Quilt permanently back to the Bay Area."

"For over 30 years, the AIDS quilt has stood as a beautiful tribute to those lost to the devastation of HIV/AIDS and has reminded us all of our responsibility to tell the personal stories lovingly stitched into every panel," Pelosi said. "We are deeply grateful to the Names Project and the National AIDS Memorial Grove for joining together to ensure that this powerful memorial continues to be a source of comfort, education and engagement for generations to come."

Cunningham said the quilt would begin the move to the East Bay next month. All the panels should be relocated by the end of January.

Archive
He added that the American Folklife Center at the Library of Congress will become the new home for the National AIDS Memorial Quilt Archive in 2020. The archival collection currently totals more than 200,000 items. It includes biographical records, correspondence, photographs, tributes, epitaphs, news clippings, and artifacts submitted by panel makers that add context about the lives memorialized on the quilt panels.

The archive also documents the creation, marketing, and exhibition of the quilt over the last 32 years. According to a news release, digital assets include images of all the quilt blocks and detailed information about the creators of quilt panels. The American Folklife Center will preserve the archival records, which will be made available to researchers and the public after archivists process and organize the materials.

Cunningham explained that the AIDS grove's offices are currently located in the Flood Building on Market Street in downtown San Francisco. He said it is the grove's hope to move back to the Castro and display some of the quilt panels there.

"We're exploring that for next year," he said.

A conservationist will do an analysis of the 52 tons of quilt panels once they are in Oakland, Cunningham said, to ensure they "are handled in the right way."

It is the AIDS grove's intention to continue the Names Project's educational display program — where quilt panels are displayed at schools and other locations — and a newer initiative the Names Project started, Call My Name.

"This program is aimed at the African American community," Cunningham said, adding that quilting is done in African American churches and other centers so that members of that community lost to AIDS can be remembered. He expressed hope that the project could be expanded, perhaps to the Asian Pacific Islander, transgender, and hemophiliac communities.

As part of the agreement, the AIDS grove will embark on a fundraising initiative in order to build a preservation fund so that the quilt "is never in a state of risk," Cunningham said. According to the Names Project's most recently available tax filings, it had a deficit of about $500,000. The 2017 IRS Form 990 stated that Rhoad's salary was $100,000 and the organization received $150,000 in quilt display fees.

Cunningham was asked if the quilt would be part of the museum the grove announced two years ago. Rather than build its own museum focused on the AIDS epidemic, Cunningham said the nonprofit is now exploring opening a center for social conscience.

The GLBT Historical Society is embarking on its own plan for an LGBTQ history museum, which it would like to locate in the Castro. A recent feasibility study the historical society commissioned said such a project would be doable, and there were two options: one for a museum and one with the museum and its archives housed in one location.

Terry Beswick, a gay man who's the executive director of the society, has sought support from city officials for the project.

Cunningham said that he has discussed the projects — an historical society museum and the AIDS grove's center — with Beswick.

"I've had constructive conversations with Terry," he said.

Guest Opinion: From one pandemic to another
Sign up!