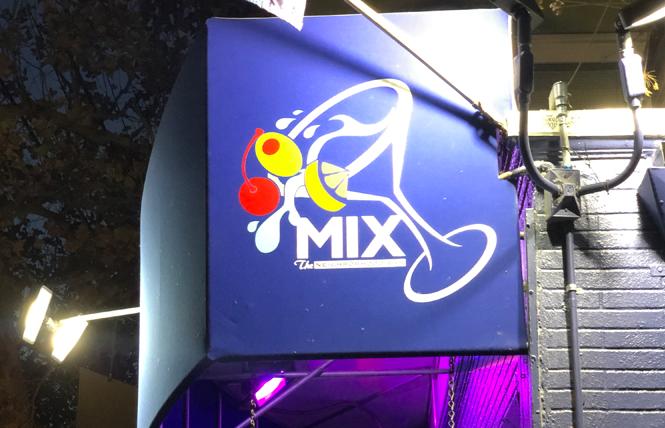 A former shareholder of the Mix bar has sued two of the other owners. Photo: John Ferrannini

Lawrence "Larry" Metzger, a gay man and onetime shareholder in the corporation that does business as the Mix gay bar on 18th Street in the Castro, is suing the corporation and two of its shareholders, alleging six causes of action, including breach of contract.

In the court filing for Metzger v. TDG Inc., et al. filed on Monday, October 28, in San Francisco Superior Court, Metzger claims that shareholders Virginia Crum-Ross and Ross Crum removed Metzger in July as a shareholder — in violation of the contract that specifies ownership over TDG Inc., and over his objection and that of another shareholder, who is not a party in the suit.

Subsequently in September, Crum fired Metzger in violation of the contract, according to the court filing.

Crum-Ross also issued checks with one signature instead of two as required in the contract beginning around the end of 2016, according to the court filing, which also states that Crum removed an obligation of $175,000 owed to Metzger by TDG Inc. between 2016 and 2017 "at his sole discretion, without any information or consent of plaintiff or approval of the board of directors," according to court documents.

Crum said the loan was "removed pursuant to a forensic accounting in which he refused production to plaintiff," the filing states.

The six causes of action include breach of contract, common counts, fraud, breach of fiduciary duty, conspiracy, and breach of the covenant of good faith and fair dealing.

Metzger had been a 35% owner and served as vice president of TDG Inc., according to the court filing.

When contacted, Metzger's attorney, Masha Hakimi, told the Bay Area Reporter Tuesday that everything it needs to know is in the court documents and didn't want to speak further on the topic because it was a "highly-sensitive, personal issue."

The B.A.R. called a phone number Monday afternoon associated with Crum-Ross seeking comment. The woman who answered said she was not Crum-Ross, then asked what the call was regarding. When the reporter mentioned it was about the Metzger suit, another woman on the phone said, "I can't talk about that," and whoever had the phone hung up.

There is a case management conference scheduled for April 1, according to a subsequent court document.