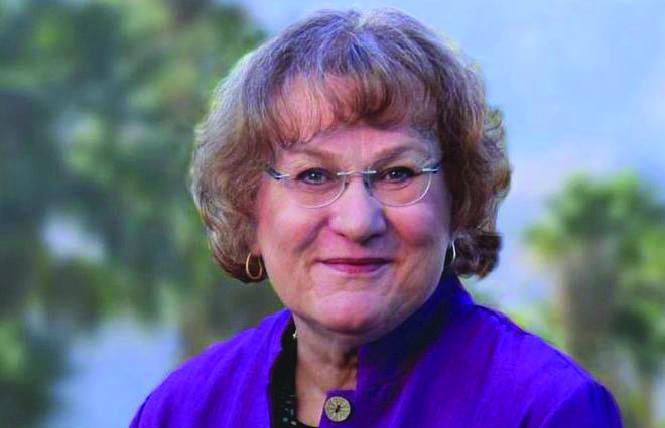 Transgender Palm Springs City Councilwoman Lisa Middleton could make history if she enters the special election for an open California Senate seat. If elected, she would be the first trans person to serve in the state's Legislature and be the first transgender state Senator in the country.

Middleton made history with her election to her council seat in 2017, becoming the first transgender person elected to a non-judicial office in the Golden State. She told the Bay Area Reporter she is now "seriously considering" the unexpected opportunity to run for the state legislative seat.

In a brief interview Friday, Middleton said she expects to "shortly" decide if she will run for the Senate seat.

"I am very seriously considering it," said Middleton, a former Bay Area resident who moved to Palm Springs with her wife, Cheryl O'Callaghan, in 2011. "I am talking with a number of advisers and people that I rely on for political advice. I hope to make a decision shortly, shortly being in the next few days."

Governor Gavin Newsom has 14 days to call for a special election to fill Stone's 28th District seat, which represents a large swath of Riverside County, including the LGBT retirement and vacation meccas in the Coachella Valley. He is expected to schedule the race so that it coincides with the March 3 primary.

If none of the state Senate candidates receive more than 50% of the vote, then the top two vote-getters would advance to a runoff election in May. But due to the heated contest for the Democratic presidential nominee, the timing is seen as giving a Democrat the edge to win the seat outright in March if the party coalesces around one candidate.

"In a March primary, if there can be agreement on one Democratic candidate running, it is a very winnable seat," said gay Palm Springs City Councilman Geoff Kors. "There will be enormous turnout for the Democratic primary; we may not see the same on the Republican side."

Kors, who is running for re-election in Tuesday's election, told the B.A.R. that he has no plans to seek the open Senate seat. He plans to hold off on a formal endorsement of a fellow Democrat in the race until the field of candidates is clear.

"If one of my colleagues, including Lisa Middleton, were to run, I would be strongly inclined to support them," he said. "I think Lisa has done an amazing job on the council and has a statewide reputation."

Thus, Middleton would be a formidable person to beat should she enter the race, noted Kors. Formerly executive director of the statewide LGBT advocacy organization Equality California, Kors noted that her candidacy would have strong support from LGBT leaders across the state.

"The historic nature of having a trans person run for state Senate and to have the Legislative LGBTQ Caucus in California, which is renowned nationally, become an LGBT caucus including the T would be incredible," said Kors. "It would make a difference in so many people's lives, especially young transgender teenagers who often think they can't achieve anything because they don't have role models."

Lesbian Palm Springs resident Joy Silver, who narrowly lost to Stone last November, had already announced she planned to run again in 2022. The aging policy expert has yet to respond to the B.A.R.'s request for comment on if she now will enter the special election in 2020 to serve out the remainder of Stone's term.

Kors told the B.A.R. that Silver had yet to reach out to him about running in the special election.