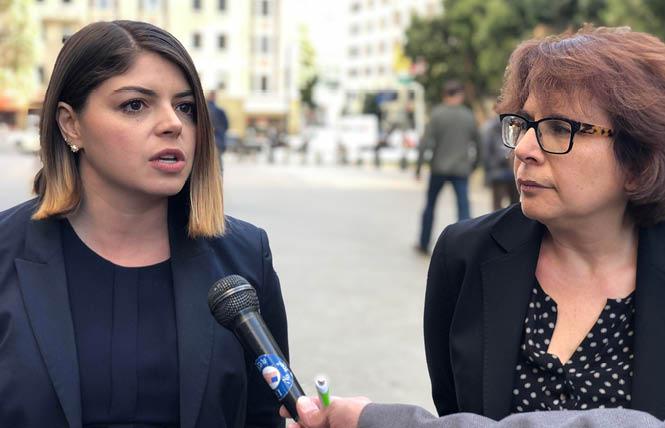 The rule, which unless Alsup rules against it will go into effect November 22, would allow any individual, entity, or health provider to refuse to administer care if they find religious or moral objections to providing it.

It was originally promulgated by the U.S. Department of Health and Human Services in the spring, but implementation was delayed until November.

This has special implications for the LGBT community — people seeking a PrEP or PEP perscription, along with transgender people seeking health services, could be denied care. But most of the discussion in the U.S. District Court for the Northern District of California, at the Philip Burton Federal Building in the Tenderloin, had to do with the effects this would have on access to abortion.

Inside the courtroom
There are actually three cases that Alsup heard: San Francisco v. Azar, secretary of HHS; California v. Azar; and Santa Clara County v. HHS. The refusal rule is alleged to violate a slew of state and federal laws, including the U.S. Constitution.

Alsup, a Clinton appointee to the federal bench, opened by saying he was going to make his decision without regard for politics.

"You are all dedicated partisans and live with the details, I got hundreds of other cases," he said. "I don't want to hear political arguments today."

Plaintiff San Francisco, represented by Deputy City Attorney Jaime Huling Delaye, said that the refusal rule violates the stated intention of the statute that it is intended to interpret — the Church amendment of 1973.

Nemetz said that it would be wrong for the federal government to force local jurisdictions to change their existing rules, policies and procedures in such a short amount of time — especially since these were heretofore compliant with federal law.

Alsup compared that argument with ones he has heard in the past justifying discrimination against, ironically, women and LGBT people.

"In every anti-discrimination ruling the same argument was made," Alsup said, explaining that evidence of anti-religious discrimination would be a good reason to change local rules. "You'd have been a good lawyer for the people opposing that because that's their argument."

But Alsup did seem surprised when lawyers for the plaintiffs clarified that hospitals couldn't ask the hypothetical ambulance driver, or other health care workers, their beliefs about abortion and other issues that touch upon religion before they were hired.

Alsup said it would make sense if hospitals could know so that they could avoid putting those people in a situation where they could deny care to someone in the first place.

Vinita Andrapalliyal, a lawyer for the U.S. Department of Justice representing the defendants, said the refusal rule is intended to stop conservative Christians from giving up on medicine altogether — and that asking the prospective employee may constitute religious discrimination.

Andrapalliyal had to defend the fact that one stated justification for the refusal rule was that 376 complaints had been made about religious discrimination in medical practice in Fiscal Year 2018 — when in fact the number warrented was much lower and a substantial amount of them were about vaccinations.

"Isn't that kind of a major goof?" Alsup asked.

"HHS didn't rely on these complaints because of the substance of what they were saying," Andrapalliyal said. "It was one of the many metrics we considered — that there's a public interest in the conscience issue."

After four hours of arguments, Alsup chided the lawyers for only giving him three weeks to decide between the time of the hearing and the time the refusal rule goes into effect.

"You expect me to spend all night and day on your case," he said, adding there is a "one-third" chance he will ask for a second round of oral arguments.

Outside the courtroom: Activism and outrage
As oral arguments got underway, nurses organized by the Service Employees International Union Local 1021 gathered in front of the federal building to protest the refusal rule.

Guy Vandenberg, who worked in SFGH's Ward 5B that cared for AIDS patients and who now works at the HIV clinic at SFGH, said that he is worried about renewed stigma against his patients if the refusal rule goes through.

"Our patients faced a lot of stigma and discrimination because the communities affected were already stigmatized," Vandenberg said. "Patients were treated as toxic and we've made such progress; this would set the clock back 30 years."

Refusal to comply with the rule may result in local entities losing HHS funding, which would have a devastating impact. Huling Delaye said that 40% of SFGH funding comes through the federal government.

At a news conference outside the courthouse, Huling Delaye said that the city was suing partly as a result of its commitment to LGBT rights.

"San Francisco has been a bastion of health care equality, particularly when it comes to women's reproductive health and LGBTQ patients," Herrera said. "Hospitals are no place to put personal views above patient care. Refusing treatment to vulnerable patients shouldn't leave anyone with a clear conscience."

At the news conference, attorney Jamie Gliksberg of Lambda Legal Defense and Education Fund discussed the negative implications for LGBT patients if the refusal rule is allowed to go into effect.

"It specifically points out transgender patients could be denied care and invites them to be discriminated against," Gliksberg said. "We know this because HHS, in the rule, misapplies the word sterilization to transgender-related care, calling gender-affirming health care sterilization.

"This is not only contrary to all prior meanings of the word, especially in the medical context, but it's an extremely offensive use of the word. Just as a patient treating prostate cancer should never be denied care — because such care is not sought for the purpose of preventing procreation — the same applies to transgender patients," she added.

Updated, 11/5/19: This article was updated to include the correct name of law firm Mayer Brown.