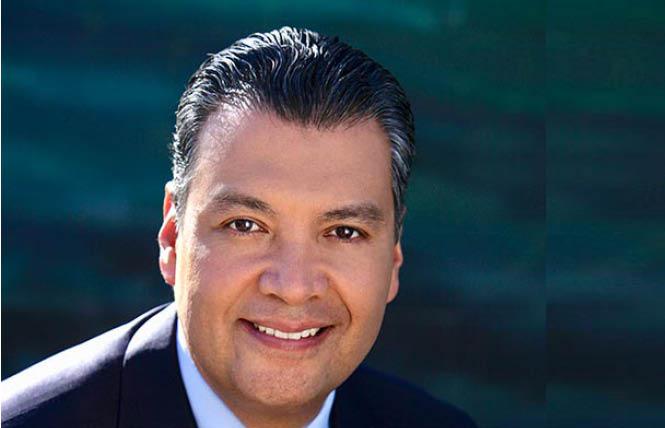 California leaders are taking steps to protect transgender voters ahead of the March 3 presidential primary.

Believed to be a first-of-its-kind initiative, Secretary of State Alex Padilla is working with Equality California Institute, the educational arm of the statewide LGBT advocacy organization, to ensure transgender people's voting rights are not violated when they head to the polls next year not only to select presidential nominees but candidates for numerous state and local positions.

The plan includes training for poll workers that county registrars can use to educate them on how to engage with voters whose gender identity, expression, or pronouns do not appear to match their name on the voter rolls. The majority of California voters are not required to show identification to a poll worker before casting a ballot.

Nonetheless, LGBT advocates point out that many transgender and gender-nonconforming voters may be registered and appear on the voter roll under a name that does not appear to "match" their gender identity, expression or the name and pronouns that they use. Those who are first-time voters and registered by mail but failed to provide a driver's license number, state identification number, or the last four digits of their Social Security number on their registration form may be asked to show a form of identification when going to the polls.

In these cases, note LGBT advocates, voters' names and gender markers on their form of identification may not appear to "match" their gender identity, expression or the name and pronouns that they use.

"Every eligible voter has a right to cast a ballot free from any unnecessary burdens or intimidation," stated Padilla. "Elections officials have a duty to facilitate the participation of all eligible voters. By partnering with Equality California we can benefit from their expertise and experience to better train poll workers and ensure a welcoming voting environment for LGBTQ citizens."

The new voting rights initiative will also see the development of content such as brochures, posters, and digital media to inform transgender and gender-nonconforming voters of their rights. And a third component will involve "targeted nonpartisan" 'Get Out the Vote' efforts not only about next year's election but also about the importance of trans and nonbinary individuals participating in the 2020 census, which impacts how he federal government distributes resources to the states for myriad purposes and services.

"California is proud to be proactive in protecting the voting rights of LGBTQ voters and fostering an inclusive democracy," stated Padilla.

The announcement Friday morning was timed to coincide with EQCA's fifth Fair Share For Equality convening being held that day in San Francisco. Padilla gave the keynote address to the LGBT leaders and lawmakers attending the daylong conference.

In a brief interview with the Bay Area Reporter prior to his remarks, Padilla said his office had only heard anecdotally of issues trans and nonbinary voters had encountered at the polls. He said anyone who does encounter an issue should immediately report it through their local elections office and via his office's voter hotline 1-800-345-VOTE (8683).

"So we heard, sort of, anecdotal stories of issues or concerns, you know, when people vote or what maybe what kept somebody from being able to vote, but there's not, you know, sort of a million documented cases, bad experiences that have come in through our hotline or department," said Padilla. "But, you know, I'd rather not wait for that. If we know we can do more to assist eligible voters then let's do it to try to prevent problems or issues from happening."

The Williams Institute, an LGBT think tank located at the UCLA School of Law, estimates approximately 0.76% of Californians — or 218,400 people — identify as transgender. Based on the overall numbers of eligible and registered California voters as of February 2019, the institute estimates there are likely at least 190,000 eligible voters and 150,000 registered voters statewide who identify as transgender.

"No one should be denied the right to vote because of their gender identity or expression — and there's certainly too much at stake next year to let that happen in California," stated EQCA Institute Executive Director Rick Zbur. "While other states impose strict, unnecessary voter ID laws targeting people of color and the LGBTQ community, California is making sure every single eligible voter has a chance to cast a ballot."

Yet Gina Roberts, a transgender woman and Republican leader in San Diego, told the B.A.R. that she had never encountered an issue voting or heard of another trans person facing an issue at the ballot box. What is needed, she argued, is California passing a voter ID law so that voters would be required to prove their identity when they vote.

"First pass another pandering to the LGBT world that will do no good for them. We really need voter ID in CA. Really," Roberts wrote in a Facebook message reply to the B.A.R.'s request for comment.

The Human Rights Campaign, however, applauded the "historic" training announced for California poll workers. The national LGBT rights group had previously announced a six-figure partnership with Stacey Abrams, a Democratic rising star from Georgia, and her group Fair Fight's efforts to curtail voter suppression and ensure that every LGBTQ person is able to vote.

"Across the country, transgender and gender non-conforming people deal with unique ballot access issues, especially in states with voter ID laws, that are often overlooked," stated HRC President Alphonso David. "Trainings like California's are critically important to ensure that the LGBTQ community has fair and equal access to cast ballots. Other states and municipalities must follow suit."

While B.A.R. transgender columnist Gwendolyn Ann Smith, who is based in California, hasn't had problems voting personally, she said there is growing concern that trans people and others will encounter problems at the polls next year in certain jurisdictions across the country. She pointed trans and nonbinary people to a two-page voter guide that the National Center for Transgender Equality put out and can downloaded online here.

"I know there has been some fear of problems at the polls, as we're seeing more locations potentially requiring ID cards and the like, especially in areas where changing one's identity documents can be difficult," said Smith.

Padilla told the B.A.R. he expects the training materials for election workers to be sent out by the first of the year. The cost is negligible, he said, and will be absorbed by his office's current budget.

"By February for sure because the bulk of the poll worker trainings are happening right in January and in February for the March primary," he said.