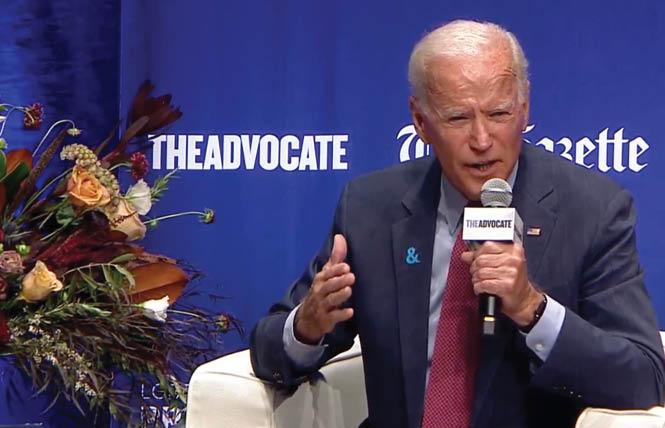 Several Democratic candidates seemed to throw President Barack Obama under the metaphorical bus Friday night, as they sought to illustrate how they didn't take as long as other Democrats to "evolve" on LGBT issues.

Former Vice President Joseph R. Biden Jr. was taken to task for having characterized Vice President Mike Pence as a "decent guy." And Senators Elizabeth Warren and Kamala Harris were grilled over their early opposition to gender confirmation surgery for trans prison inmates. But nobody asked gay South Bend, Indiana Mayor Pete Buttigieg about his recent attack on LGBT media, which he claimed criticizes him either for being "too gay" or "not gay enough."

Such was the first national presidential forum devoted to LGBT issues for the 2020 presidential campaign. The September 20 forum was livestreamed from Coe College in Cedar Rapids, Iowa, and sponsored by the statewide LGBT group One Iowa, the national LGBT media group GLAAD, the Advocate LGBT newsmagazine, and the Gazette, the local Cedar Rapids newspaper.

Transgender actress and businesswoman Angelica Ross emceed the event, which gave 10 Democratic presidential candidates, including four of the top five polling candidates, 10 minutes each on stage. During that time, they were each asked to say what they would do on LGBT issues during their first 100 days as president, and then answer two to three additional questions from a representative of one of the event's sponsors: Gazette columnist Lyz Lenz, One Iowa policy director Keenan Crow, and the Advocate's editor in chief Zach Stafford.

Three of the top Democratic candidates did not show up: Senator Bernie Sanders, former Congressman Beto O'Rourke, and businessman Andrew Yang. Sanders was in the middle of a four-day tour of college campuses in the Carolinas and spent Friday evening at Winthrop University in Rock Hill, South Carolina. Erica Barz, communications director for One Iowa, said O'Rourke and Yang did not give any specific reason when they declined to participate.

Buttigieg got a loud and prolonged standing ovation when he was called to the stage, seventh in the line of 10 candidates. Buttigieg's appearance at the LGBT forum came just two days after he told a SiriusXM host, "I can't even read the LGBT media anymore, because it's all, 'He's too gay, not gay enough, wrong kind of gay.'" Buttigieg did not specify which LGBT media outlets he believed expressed such criticism, and many LGBT media outlets were quick to point out that it has been mainstream media that have questioned Buttigieg's expression of his being gay. Most notorious of the mainstream media articles was one published by the New Republic magazine. The article, which has since been taken down from the magazine's website, was a commentary by gay writer Dale Peck, who referred to Buttigieg as "Mary Pete" and said the only difference between Buttigieg and all other white men running for president is "what he does with his dick (and possibly his ass...)."

During his opening remark, Buttigieg criticized Housing and Urban Development Secretary Ben Carson for referring to transgender women as "big hairy men" trying to get into homeless shelters for women. Carson reportedly made the remark to HUD workers during a stop in San Francisco this week. Buttigieg said that if anyone in his administration spoke the way Carson did about transgender people they would be fired.

The second strongest applause from the live audience Friday night came in a boisterous standing ovation for Warren, who was slated ninth out of the 10 candidates. Warren ignored the directive to say what she would do in her first 100 days as president. Instead, with her voice sounding gripped with emotion, she read the names of 18 transgender women of color who have been victims of hate crimes in 2019.

"Equality is far off for many people in this country," said Warren, "but the cost of inequality for transgender people, particularly transgender women of color, is now a moment of crisis...."

Warren, who has become well known for having articulated plans to fix many of the nation's problems, said President Donald Trump "has a plan" too — to turn "people against people, white against black, turn straight against gay and trans, turn Christian against Muslim...." His strategy, she said, was to have these conflicts distract the nation so people "won't notice that Donald Trump and his buddies are robbing the rest of this country of its wealth and its dignity."

Lenz noted that, in 2012, Warren didn't support gender confirmation surgery for trans inmates but that she had changed her mind this year. She asked how to get others on board. Warren replied, "Fight for it."

When Lenz asked Warren to discuss what being "moral" means to her, Warren cited a biblical passage, Matthew 25, in which giving food and solace to a stranger is equated to giving good and solace to the lord. The story, she said, illustrated two things for her.

"There is god, or goodness, or power in every single human being," said Warren. "And we are not called on to have a good heart and smile and open mind. ... We are called on to act ... and that is what we will do."

Asked what she would do if the U.S. Supreme Court rules against including LGBT people from protection of Title VII of the federal Civil Rights law, Warren said, "We have a Congress we can hold accountable and Congress can decide we all are equal. That is the fight I am ready to lead."

Struggling for ground
Applause for little-known candidate Joe Sestak, a former admiral and U.S. representative, was light. So it was for long-shot author Marianne Williamson and for Congresswoman Tulsi Gabbard. While Gabbard reminded the audience she earned a 100% positive voting record in Congress from the Human Rights Campaign during the most recent session, she was gently prodded to address the fact that, in the early 2000s, she worked against marriage equality in Hawaii. A question submitted by an audience member asked Gabbard "How can LGBT people trust you?"

Gabbard said her record in Congress "speaks for itself." She noted that, when she served in the military, she served alongside LGBT Americans, "got to know them in the most extreme circumstances. ... We had each other's backs."

In addition to Warren and Gabbard, others had to account for their past actions against LGBT interests.

Lenz asked Harris, "How can transgender people trust" her given that, as California's attorney general, she submitted a brief in support of denying gender confirmation surgery to prison inmates. Harris said that, as attorney general, she had to represent the state agencies. But she said that later, "when I learned what they were doing, behind the scenes I had them change the policies."

Lenz went after Biden, too, noting that, as a senator in the 1990s, he voted for the "Don't Ask, Don't Tell" policy of banning LGBT people from the military and the Defense of Marriage Act that barred federal recognition of marriages between same-sex couples. She noted he later voted to repeal both those laws but recently referred to Pence as a "decent guy."

"You're a lovely person," quipped Biden, who seemed thrown off balance by the questions.

Lenz continued, saying that Pence has a well-established reputation of being opposed to equal rights for LGBT people.

"How can [LGBT people] trust you won't compromise on issues that put them at risk in order to compromise with people like Pence?"

Biden reminded the audience that he "didn't have to go through any period of adjustment" to support marriage equality for same-sex couples.

The word "evolve" became a politically loaded term during the early years of the Obama administration because as then-president, Obama was initially reluctant to support marriage equality. By the start of his second term, Obama expressed support for allowing same-sex couples to marry. His widely publicized statement came just days after Biden gave an interview saying he was "absolutely comfortable" with marriage equality.

Biden said his reference to Pence as "decent" was "just a way to speak" when you have to work with someone, but he added, "I don't think Trump is all that decent."

Senator Cory Booker was quick to point out that he supported LGBT equality from the start of his political career "before a lot of national leaders had evolved." He demonstrated a deep familiarity with LGBT institutions and history, referring to the work of the Hetrick-Martin Institute in New York that helps LGBT youth; referring by name to Ja'leyah-Jamar, a black transgender woman in Kansas City who became the 18th transgender woman of color to be killed by a hate crime this year; and noting that 30% of LGBT youth report missing school out of fear for their safety. He also noted that he stood up for marriage equality at a time when few others in public office had. As mayor of Newark, for instance, he refused to preside over male-female marriage ceremonies until same-sex couples could also marry.

Booker said he was "a lifelong ally on these issues" and, as president, would have a "comprehensive agenda on Day One."

Senator Amy Klobuchar who, like Booker, has been polling in the low single digits, seemed to make a warm impression on the audience, even though her initial comments were interrupted by someone shouting from the back of the audience. When a member of the audience who had been in the Orlando LGBT nightclub Pulse in June 2016 when a gunman killed 49 people and injured 53 asked about gun control, Klobuchar beckoned him to the stage and gave him a hug.

"I'm proud of how the LGBT community has stood with other groups to get gun legislation passed," said Klobuchar. And she said she "would not fold" to the National Rifle Association in her efforts to pass gun control.

Former Housing and Urban Development Secretary Julian Castro, the last of the 10 candidates heard at the forum, said he found Carson's remark "disgusting" and said he should "step down" from the position.

At one point during the forum, one of the moderators announced that it was trending at the top of social media. They did not identify which media. According to Twitter, #LGBTQforum got 31,200 Twitter posts, putting it in fourth place behind the #StormingArea51, a hashtag for people interested in a mass trespassing event at a Nevada Air Force testing range associated with reports of UFO activity. That issue drew 73,000 posts.