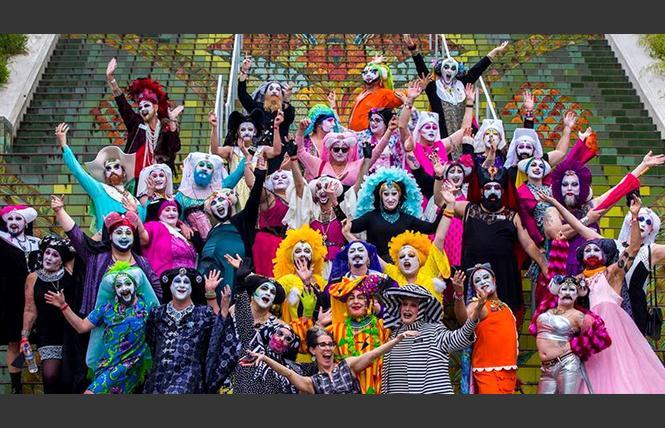 The Sisters of Perpetual Indulgence are involved in a contract dispute with Folsom Street Events. Photo: Courtesy SF Station

The Sisters of Perpetual Indulgence will remain involved in this year's Folsom Street Fair despite an initial contract dispute that threatened their participation.

In issuing their news releases, both organizations took a humorous approach. The Sisters first released theirs, titled "The Holy Sacrament of Reconciliation," Thursday afternoon, where the Sisters and Folsom Street Events announced their partnership will continue.

"Despite a rocky week, I'm thrilled to announce that the Order has overwhelmingly approved a contract for participation in 2019," Sister Selma Soul, abbess and president of the order, said in a news release. "The Sisters feel that FSE has heard our concerns about safety, inclusion, and giving back at Folsom Street Fair. Because of this, the Order will be present at Folsom Street Fair and continue our ministry at the gates and within the fair. We can't wait to see you there."

In it, the FSE leadership and the Sisters of Perpetual Indulgence "announced a new agreement to ensure visitors to this year's Folsom Street Fair will continue to be joyfully welcomed by the iconic Sisters. The Sisters will return to their roles at the gates of the fair, encouraging donations to support a variety of Bay Area nonprofits."

Jen Schuster, president of FSE's board of directors, said the organization was "thrilled" to have a new agreement with the Sisters.

"We appreciate their volunteer service, high level of energy and humor, and the memorable atmosphere they create at our fair gates. I also want to acknowledge our executive director, Patrick Finger, along with Sisters Rosie Palmer Partridge and Selma Soul, for their work in crafting this mutually beneficial agreement," Schuster said.

News of the dustup with Folsom Street Events, which produces the leather and fetish extravaganza set for Sunday, September 29, was first reported in the San Francisco Examiner. The story stemmed from Sister Flora Goodthyme posting on her Facebook page Monday about the problem.

"Hey Kittens! It looks like after a 25+-year partnership with Folsom Street Events the Sisters of Perpetual Indulgence are being squeezed out," Goodthyme wrote, noting the post was their opinion and not an official statement from the Sisters. "FSE even had the nerve to want to charge us $500 for every nun who doesn't make it to their shift at Folsom. In a single shift 1 Nun could earn an expected $350 for charity, how does this make sense or build community."

In a phone interview with the B.A.R. Tuesday, Soul, also known as James Bazydola, said that the Sisters and FSE were "in negotiations still."

"I don't think they understand how our organization works," Soul said, describing a complicated voting process for the Sisters to decide on the contract since it's occurring between regular meetings.

In past years, the Sisters have worked the gates at Folsom, collecting donations. The money raised at the fair, through gate donations and beverage sales, is distributed to nonprofits, which provide volunteers to work the street fair. The Sisters have long been one of those organizations.

In a comment on Goodthyme's post, Soul noted that the Sisters typically received between $25,000-$33,000 from the Folsom fair.

Schuster commented on Goodthyme's post that the $500 charge if a nun doesn't show up is "incorrect."

In the interview, Soul attributed the current issues to the "leadership" at FSE. "There were huge changes last year," Soul added.

In her post, Schuster confirmed there were changes to the Sisters' 2018 contract.

"Last year, we negotiated an agreement with the Sisters that included fewer responsibilities, shifts, and a lower overall donation amount," Schuster wrote. "This was part of an effort to increase equity with our other beneficiaries who have historically received smaller donations than the Sisters while providing more than double the number of volunteers per fair."

Finger did not return a phone call Thursday seeking comment.

In 2017, when Finger was managing director of the fair, the Golden Gate Wrestling Club's application for a beer booth was rejected. At the time, Gene Dermody, a founder of the wrestling club, told the B.A.R. that it had had a beer booth at Folsom for 24 of the fair's last 26 years. Finger would not specify a reason for the wrestling club's application being rejected.

The 2018 edition of the fair was Finger's first as executive director. He was hired for the position in November 2017. According to the organization's 2017 IRS Form 990, the latest posted on GuideStar, Finger earned $117,000 in salary and benefits as the managing director. The previous executive director's salary and benefits were $112,000, according to the organization's 2015 Form 990.

Schuster wrote that the Sisters are important to FSE.

"Our liaisons within the Sisters have provided feedback in their communications with our board and staff that our working relationship has always been respectful and cooperative," she wrote. "We remain committed to working with our liaisons and maintaining that positive relationship."

The Folsom Street Fair takes place Sunday, September 29, from 11 a.m. to 6 p.m. on Folsom Street, between Eighth and 13th streets. A gate donation of $10-$15 is requested. For more information, visit http://www.folsomstreetevents.org

Updated, 9/19/19: This article has been updated to include FSE's news release.