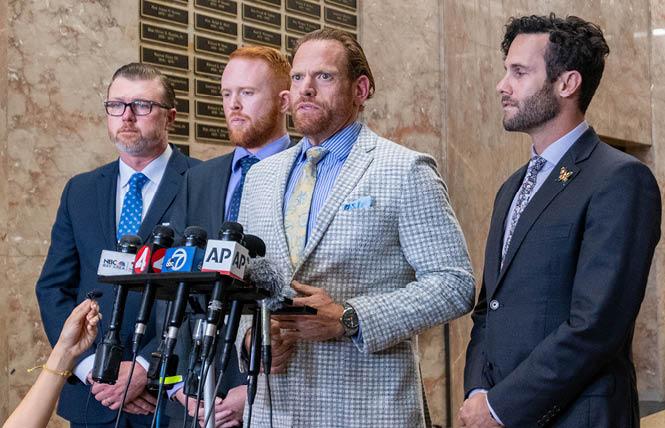 An Alameda County Superior Court jury on Thursday acquitted one of the defendants in the Ghost Ship warehouse fire and hung on the other defendant.

A jury September 5 found Ghost Ship defendant Max Harris not guilty on all 36 counts of involuntary manslaughter he had faced in connection with the December 2, 2016 Oakland warehouse fire that took the lives of 36 people, including three people who identified as transgender.

The jury could not reach a decision on the 36 involuntary manslaughter charges against Almena. Ten of the 12 jurors voted to convict him, but two voted not guilty.

Almena and Harris have been in custody since their arrests in June 2017, just over six months since the fire.

At a news conference outside court, Harris' lawyer, Curtis Briggs, expressed sorrow for the victims of the fire and said it was not the time to celebrate because of that tragedy. He said his client was being processed out of jail and was looking forward to eating a vegan meal.

Almena's lawyer, Brian Getz, broke down in tears outside court as he spoke about the loss of life in the fire.

"The fact that there was the most unspeakable," Getz said, pausing for a few seconds as he broke down before continuing, "loss of life. And so while he is happy in a sense, to be unconvicted, but he is very unhappy when he thinks about what happened. He has not and will not lose sight of the terrible tragedy that has occurred."

Almena's other lawyer, Tony Serra, told reporters that he expected the district attorney to retry the case against his client and added that he is looking forward that retrial. He said Almena told him that he should call Harris to testify on his behalf. Serra said he would try to get a judge to release Almena on bail pending that trial.

In a series of four jailhouse interviews with the Bay Area Reporter since 2017, Almena said that he and Harris were made scapegoats for the actions and inactions by the warehouse's landlord and city officials.

Mary Alexander, an attorney who is representing several victims in the civil case, told reporters outside court that families were disappointed by the verdict but were looking forward to proving the civil case against the City of Oakland, the Ng family who owns the building, as well as PG&E. She said that civil trial will begin in May.

Chief Assistant Alameda County District Attorney Kevin Dunleavy told reporters that his office respects the jury's decision and will decide at a later date whether to retry the case based in part on discussions with jurors and victims' families. He said that the thoughts of prosecutors are with the victims' families. Dunleavy declined to answer any questions because of the pending legal action in the case.

The mother of victim Alex Vega told reporters outside court that she was very disappointed by the decision. She said she attended every day of the trial and felt that the process was "in vain."

"My son and his girlfriend died," said Mary Vega as her voice choked with emotion. "There is nothing I can say, I am just upset."

Oakland Mayor Libby Schaaf released a statement that read, "Our thoughts are with the families and friends of the victims today."

She said she was "grateful for the professionalism and integrity displayed by all current and former city employees who participated in this trial."

This story has been updated.