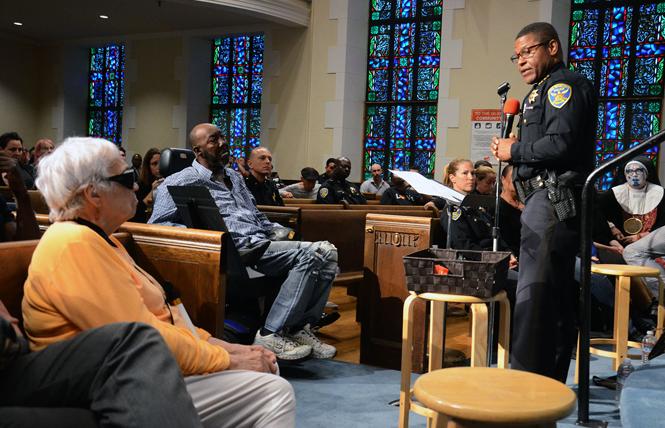 At an August 26 meeting at Glide Memorial Church, San Francisco Police Chief William Scott apologizes directly to Joanne Chadwick, left, for abusive treatment by the police department against the LGBTQ community. Chadwick attended the New Year's Eve party in 1965 at California Hall that was raided by the police and led to widespread criticism of the police department. Photo: Rick Gerharter

The meeting was held in the sanctuary of Glide Memorial Church to commemorate the 53rd anniversary of the Compton's Cafeteria riot. The Compton's riot, which preceded the Stonewall riots by three years, was "the first known instance of collective militant queer resistance to police harassment in U.S. history," according to transgender historian Susan Stryker, who co-directed the Emmy Award-winning 2005 documentary "Screaming Queens" about the incident.

Scott apologized on behalf of the department.

"I and the men and women of this police department are truly sorry," the chief said to the crowd of about 100 people. "We're sorry for what happened and we're sorry for our role in it and we're sorry for the harm that it caused. Some here tonight may ask, why now? Why are we doing this now? And for those of you that might wonder why, I say it's because we are listening. We hear you. And because it's time."

But not everyone in the room was buying it.

"If you want to truly apologize for something, you have to stop what you're doing," said one activist, as he referenced the police sweeps of homeless people.

The meeting was the first in a series between the police and community members. Scott said that he hopes these meetings will build bridges between the SFPD and the LGBTQ community.

While some thanked the chief for reaching out, others expressed trepidation, pointing to the protesters at June's San Francisco Pride parade who held up the march for 50 minutes with a list of demands that included keeping the police and corporations out of Pride. One of the protesters was allegedly slammed into the pavement and dragged across the street, according to organizers.

"I showed up at the first Pride board meeting after the parade because I was devastated by the way the police violently removed peaceful protesters at our own parade," said Cheryl Rosenthal, a 58-year-old lesbian. "For me it was a call to action that our community needs to mobilize to make sure we're safe in our own city and prepare for how we are currently being targeted."

Longtime gay activist Tre Allen suggested that there be two Pride marches, one in which the police take part and another without the police for those who do not feel safe in the police's presence.

Attendees described other examples of mistreatment by police.

"I've been homeless on both coasts and submitted to domestic violence at the hand of my ex-husband," said one woman. "I got slammed to the ground by the cops at Ocean Beach. People were filming it and egging the police on. The bullying must stop."

Scott listened attentively to all the speakers, assuring everyone that the safety of all parties involved was his top priority.

"You all police us," said the chief. "Our department is set up where we have the civilian oversight board. And we have the Department of Police Accountability, which is separate from the police department. Any complaint that comes from a resident or a member of this community goes to the Department of Police Accountability. It's not investigated by the San Francisco Police Department. As the police chief I can impose discipline up to a 10-day suspension. Anything above that goes to the police commission, which is the civilian oversight board."

Breanna, a transgender woman who said that she's bipolar and declined to give her last name, expressed concern for how the police handle calls in which someone was in a mental health crisis.

"We spend a lot of time to get better at that and we've been doing that for a number of years," Scott said. "Our department has invested a lot in training to deal with those types of issues, and we've made a lot of progress. In the past year we've had over 50,000 of those types of calls and there is less than half a percent of those calls which resulted in any kind of force being used. It's not perfect, but I want to emphasize how much work we put into that issue. We still have some more work to do. We have more officers that need to be trained, but everyone who comes into this department today gets that training."

One African American woman who did not give her name pointed out that blacks are treated differently by the police. She also called on the police to take inventory of the police sweeps against homeless people.

The public comment section of the meeting lasted about 75 minutes, with many people thanking the police chief for his apology and for organizing the meeting.

The evening included a history lesson in which the Reverend Dr. Megan Rohrer, a trans person who is a volunteer chaplain with SFPD, spoke of the harassment and criminalization faced by LGBTQ people in the past. Rohrer also showed two videos in which people who lived through those times recalled and shared their experiences.

Scott told the Bay Area Reporter that he was pleased with the way the meeting turned out.

"I feel good about it," he said. "The fact that we were allowed by members of the LGBT community to listen, to hear them, and to be heard. This moment is overdue," he said. "This is a starting point to get to those difficult conversations. We need to continue to hear, to reconcile our past and to address the present."

Members of Scott's command staff were also at the meeting.

"It's a start to a larger conversation," said Commander Teresa Ewins, a lesbian who used to oversee the station in the Tenderloin. "I felt that there was a lot of positive things being said. It's important for the command staff and other members to hear the community and understand the pain they have. Their experiences and viewpoint are very important to us."

Those who attended generally gave the police department credit for addressing the community.

"It's good to see the dialogue on how the police are interested in holding themselves accountable," said William Walker, a 40-year-old gay man. "I think that putting everyone's safety first is key but police have to keep in mind that they are always in a more powerful position."

"I feel less afraid of the police," said Attakai Yazzie, a 22-year-old gay man. "I think the night was productive. I saw a young peer of mine voice his opinion and I saw police of color listen to him and I'm glad to see this interaction. I'm extremely grateful to live in a period where it's OK to be queer."