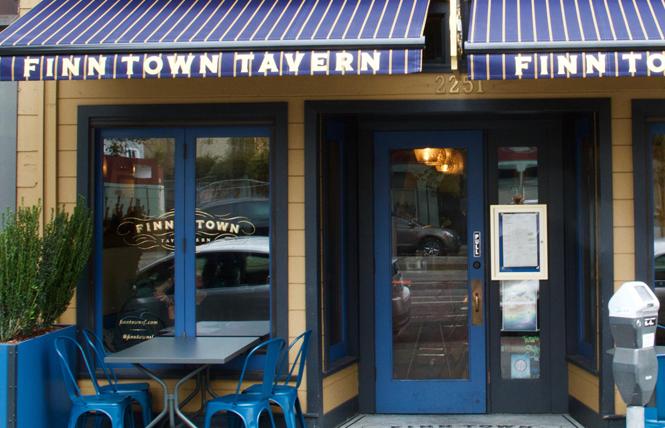 Finn Town in the Castro will close August 25 and reopen next month as a private event and party space. Photo: Courtesy Finn Town

Finn Town, the "tavern with a twist" in the Castro, will close its doors as a full service restaurant Sunday, August 25, and become a private event space next month.

In a Facebook note Tuesday to friends and family, owner Rick Hamer urged people to stop by in the next few days so they can "choose to celebrate that we were here rather than lament what could have been."

"We have space for professionals looking to do a pop-up event and amateur chefs seeking to impress their friends with their cooking abilities in an inviting setting with a full bar," with professional help available, he wrote. Caterers and artisan food producers are also welcome to rent the kitchen, which has a full baking and pastry station, he added.

Hamer, whose effusive personality became part of the Finn Town experience as he greeted friends with a hug, said he wanted to thank customers "from the bottom of our heart for all the support and love you have shown to Finn Town over the past few weeks and since we first opened. We wish we could have done better these past few weeks, but major problems in the kitchen really contributed to a less than wonderful experience and we would like to profusely apologize for that."

Hamer, contacted by the B.A.R., did not elaborate.

After opening to great reviews in December 2016, the restaurant — like so many others in the neighborhood — saw a drop in business that Hamer attributed in part to dips in foot traffic in the Castro as a result of increased street crime and homelessness.

In a story in the Bay Area Reporter two weeks ago, Hamer said that if business did not improve, he would have to make a decision about how much longer he could stay open. At the same time, Hamer announced he would not open the planned take-out cafe, Little Finn, which he has under lease a few doors south of Finn Town. Hamer and his business partner, William Vastardis, still own Papi Rico, a Mexican cantina at 544 Castro Street.

In his farewell note, Hamer said he grew up as an only child in San Francisco, without a great deal of family. Finally, at age 42, he "had the courage to come out ... without much of a support group."

"Since then, I have been so blessed by getting to know so many of you in the community and consider you my family," he wrote. "Your support of me and my endeavors has been amazing and I am so grateful to all of you. The support you have shown for Finn Town, especially after my last email call for help, has touched me beyond words."

Hamer said that he loves the Castro.

"We do not like seeing another empty storefront so will do our best in the interim as a private event space and will try our best to find a good home for Finn Town with a new owner who loves the community as much as we do," he wrote. "A final heartfelt thank you to most of my staff and our general manager Oscar Enriquez who did his very best!"