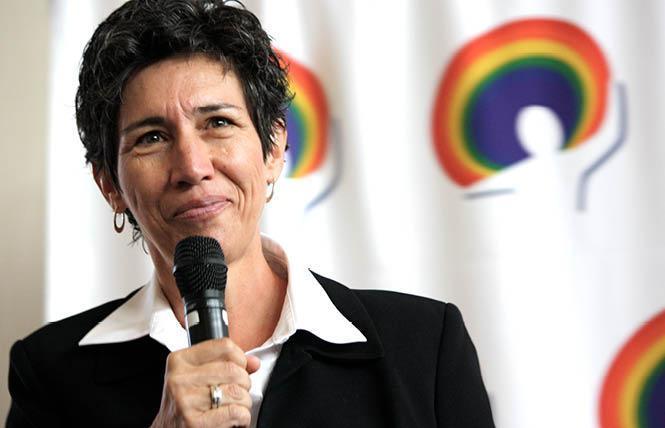 Assemblywoman Susan Talamantes Eggman received the sole endorsement from Governor Gavin Newsom in her bid for a state Senate seat.

Democratic Governor Gavin Newsom has waded into a contentious intraparty fight for a state Senate seat in the Central Valley by throwing his support behind lesbian Assemblywoman Susan Talamantes Eggman (D-Stockton). He announced his endorsement of her 2020 bid for the state's 5th Senate District seat in Stanislaus and San Joaquin counties Monday.

Also seeking to succeed Galgiani is Democratic Modesto City Councilman Mani Grewal, who is straight. He has angered LGBT advocates and officials for peddling homophobic and inaccurate attacks against Senate Bill 145.

The legislation aims to ensure LGBT adolescents are treated the same as their heterosexual peers when faced with the possibility of being listed on the state's sex offender registry. But statements and an online ad that Grewal has made about the bill allowing adults to molest young children have drawn condemnations from LGBT leaders over the past week.

As the B.A.R. reported online August 16, statewide LGBT advocacy group Equality California said it would ask the state Democratic Party to censure Grewal for the comments. The bill's author, gay state Senator Scott Wiener (D-San Francisco), also told the B.A.R. that he and his staff had repeatedly talked to Grewal to explain to him the bill's purpose and that in the spring Grewal had told him he would no longer mischaracterize it.

Yet only days later Grewal released his ad featuring Stanislaus County Sheriff Jeff Dirkse and wrote that he was "proud of my work to guarantee that adults who molest children continue to register as sex offenders." Grewal and his campaign have yet to respond to the B.A.R.'s request for comment.

But sometime after the B.A.R. posted its story Friday afternoon, Grewal quietly took down the ad from YouTube and deleted his post about it on his campaign Facebook page. Nonetheless, LGBT leaders continue to call on the Democratic lawmakers who have endorsed Grewal, including Galgiani, to withdraw their support.

"Homophobia, transphobia, anti-LGBTQ attacks have no place in our party, in our communities or in our state. We strongly condemn Councilmember Grewal's false anti-LGBTQ attacks and demand that he stop attacking our community at once," wrote state party LGBT Caucus Co-Chairs Tiffany Woods and Lester Aponte in a statement released Monday.

EQCA, in an August 19 letter to Grewal, called on him to publicly endorse SB 145 and issue a formal apology to Wiener, Eggman, and the LGBT community.

"To continue to knowingly lie about the bill — as recently as last week — and traffic in false homophobic stereotypes cannot be viewed reasonably as anything but an attack on LGBTQ civil rights," wrote EQCA Executive Director Rick Zbur in his letter to Grewal.

EQCA has yet to formally request that state party officials censure Grewal. Nor does it appear from Grewal's campaign site that any of his endorsers have pulled their support to date.

As for Newsom's sole endorsement of Eggman in the race, he noted that she "is a proud product of the Central Valley who fights every day for its people and progress. She's committed her life to public service — from wearing the colors of our country in the Army, to her devotion as a social worker, and her work on the Stockton City Council and the State Assembly."

Newsom added that "the Valley deserves another powerful voice in our state Senate and I have every confidence that Susan will be that voice."

Eggman said she was humbled to receive Newsom's support.

"Too often it feels like those in Sacramento forget about this part of the Valley, but the governor has shown that he is committed to expanding opportunities to our region and I look forward to working with him as a member of the state Senate," stated Eggman in a release announcing Newsom's endorsement.

Grewal is likely to face questions about his campaign tactics at an event being held in Modesto this Saturday, August 24. He is expected to take part in a panel discussion that afternoon being hosted by Congregation Beth Shalom — The Center for Jewish Life in response to the plans for a straight pride parade to be held in Modesto.

The synagogue is screening the 2017 documentary "Dear Freddy," about gay Jewish athlete Freddy Hirsch who ran a daycare center for children at Auschwitz, at 2:30 p.m. The panel discussion with Grewal, Rabbi Shalom Bochner, and others is scheduled to begin at 3:45.

The event, which is free and open to the public, will take place at 1705 Sherwood Avenue in Modesto.